Although Bugatti’s motorsport heritage is most associated with French Racing Blue, many of its most elegant cars were finished in the favorite color combination of its founder Ettore Bugatti: black and yellow 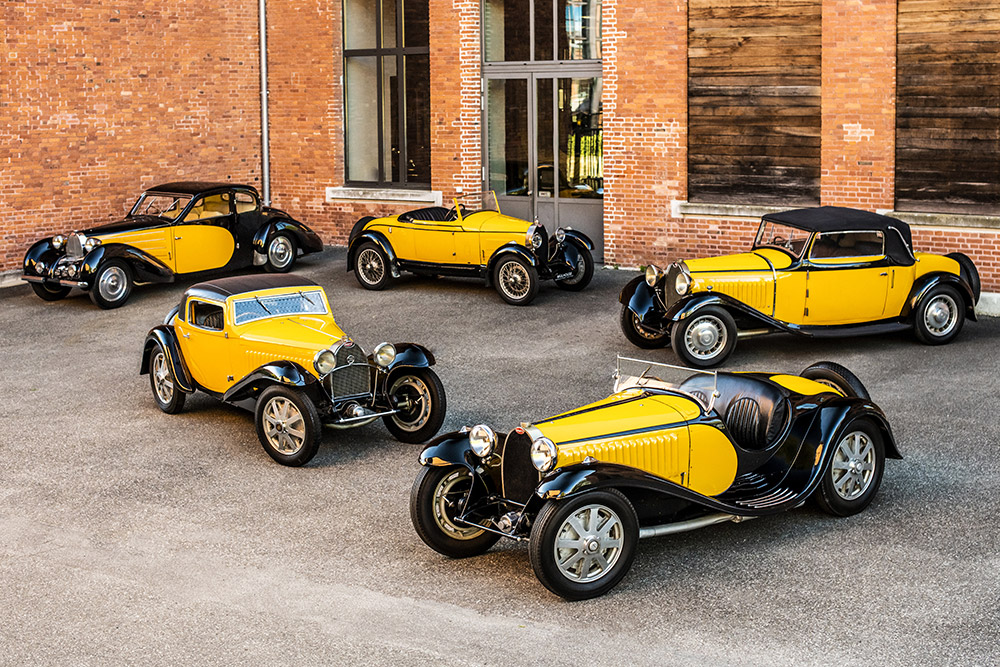 For true connoisseurs of the Bugatti brand, a hyper sports car finished in black and yellow isn’t just a striking incarnation of Bugatti’s famous duo-tone paintwork; it’s a nod to the founder himself. Many of Ettore Bugatti’s personal vehicles were finished in the eye-catching livery, and its popularity has endured from the founder, through the Jean Bugatti-designed era of cars and into the modern day.

The history of black and yellow stretches right back to the home of Bugatti in Molsheim, where the beams that sat above the old oak gates were finished in the striking colors favored by Ettore. Although many of Ettore’s early personal cars were black, as Bugatti vehicles evolved from their traditional motorsport-led Grand Prix designs and began to fully embrace the Art Deco movement, the now-famous duo-tone designs sparked a favorite combination of colors for Ettore. And it was that spark that lit a fire encouraging countless customers to embrace black and yellow for their very own Bugatti.

Famously, Ettore Bugatti’s Type 41 Royale was painted in black and yellow. Around the same time, an example of the Type 40 Roadster was finished in the same color scheme, as was a Type 44. But the popularity of this design was set to surge.

The Type 55 – a motorsport-inspired car with the 2.3-liter straight-eight engine from the Type 51 racer – was most sought-after with its Jean Bugatti-designed two-seater Roadster body. And still today the most revered of those Roadsters are finished in the timeless Ettore Bugatti-favored combination of black and yellow. Then, just two years after the Type 55 was introduced – in 1934 – one of the most beautiful and elegant Bugatti Roadsters ever built would be completed: the Type 57 Grand Raid Roadster Usine. And the colors of choice? Black and yellow.

In the modern era of Bugatti, this timeless combination has never been forgotten. In 2014, the Veyron 16.4 Grand Sport Vitesse ‘1-of-1’ was introduced, finished in black with a contrasting yellow accent, yellow detailing on the wheels and ‘EB’ logos and a complementary interior. The black leather is offset with yellow stitching and a yellow laser-perforated silhouette of the Veyron on the door panels.

In the Chiron era, the very first car delivered to North America was finished in a striking yellow and bare black carbon combination, including full painted yellow alloy wheels. With the introduction of the Chiron Pur Sport2 in 2020, the black and yellow combination was reinvented once again for a one-off with a vibrant ‘Jaune Molsheim’ yellow finish, a special shade that pays homage to the original yellow used by Ettore Bugatti. This color comes contrasted with exposed turquoise carbon fiber highlights.

“In almost everything we do, we take inspiration from the founding Bugatti family; inventing our own technologies – just as Ettore did – and pushing the boundaries of design and elegance – just like Jean Bugatti – to create something that is unlike anything else on the road. As Ettore said: “If comparable, it is no longer Bugatti.” – Achim Anscheidt, Bugatti Design Director

“That is why black and yellow remains such an important combination for us, both as a design team and as a brand. Of course, we always look to reinvent it – Ettore would never be satisfied with tradition for tradition’s sake – but you will forever find the favored colors of our founder closely associated with the Bugatti brand.”

Today, many examples of black and yellow Bugattis are cared for as part of the Schlumpf collection – the largest collection of Bugatti vehicles in the world – now located in the National Automobile Museum in Mulhouse in the heart of Alsace. Covering an area of more than 25,000 square meters, the exhibition comprises 400 of the world’s rarest, most magnificent and most valuable cars – including over 135 Bugatti models, such as two of just six Type 41 Royale ever built.

Thank you to the Mulhouse National Automobile Museum for providing the vehicles used in these images.