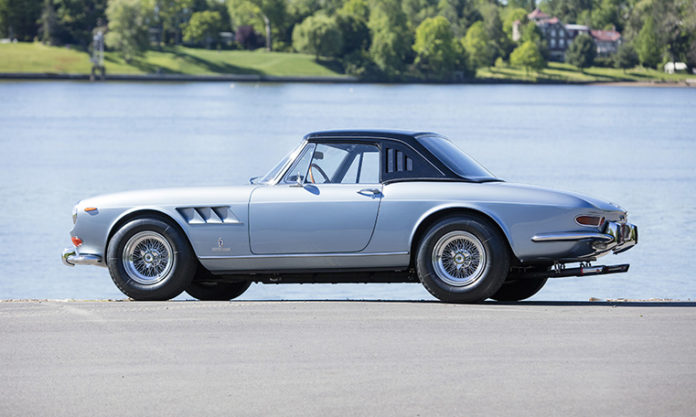 Following the news of the historic Team Cunningham 1963 Jaguar E-Type Lightweight Racer, Bonhams Quail lodge Auction is pleased to announce the addition of three significant Ferraris to its August sale during the Pebble Beach Car Week.

From what was Maranello’s ultimate, top-of-the-line model is an exquisite 1963 400 Superamerica Coupé Aerodinamico. The long wheelbase Series II model with coachwork by Pininfarina is the 15th of only 18th made. Boasting matching numbers and the highly desirable covered headlights, this exclusive Cavallino Classic Platinum Award winning gentleman’s express is fast, handsome, luxurious and rare. It is quite possibly the finest 400 Superamerica in existence.

Another legendary Ferrari is the 1972 365 GTS/4 Daytona Spider with coachwork by Scaglietti. Also a Platinum Award winner, from the Ferrari Club of America, this superb V12 in factory livery was the recipient of a meticulous restoration by the late Ferrari guru Wayne Obry and his renowned firm Motion Products. One of 121 made, this model is without question one of the most sought after classic Ferraris in the world and this example is exceptional.

The 1966 275 GTS by Pininfarina – also a ravishingly appealing open-top – is highly original and, like the others, is matching numbers and Ferrari Classiche certified. Well preserved and immensely attractive, it is one of the best driving 275 GTSs we’ve ever had the pleasure to offer.

“Our annual Quail Lodge sale is one of the most anticipated on the global collector car calendar,” says Jakob Greisen, Bonhams’ Head of US Motoring, “and this year there are two very large milestones to celebrate in addition – our 20th anniversary in Carmel and Ferrari’s 70th anniversary as a brand. With the caliber of cars we’ll be privileged to offer, this summer’s auction is not to be missed.”

To learn more about these special Ferraris or other exciting collectors’ cars to be offered by Bonhams on Friday, August 18 in Carmel, California, visit bonhams.com/quail.

Limited entries of special collectors’ cars are now being invited for consignment to this internationally attended sale hosted in conjunction with The Quail: A Motorsports Gathering. Interested parties may contact the Bonhams Motoring Department:

By: Bonhams | Photos Courtesy of: Bonhams/Litwinski