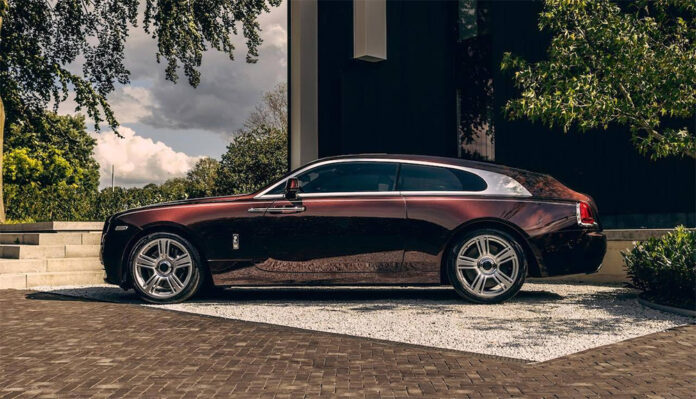 This bespoke motor car is the only one produced to date by renowned Dutch designer Niels van Roij, featuring an infinity starlight headliner, built by respected coachbuilder Carat Duchatelet. Based on a 2015 Rolls-Royce Wraith Grand Tourer, itself one of the world’s most exclusive motor cars, the Silver Spectre was the hand-built result of 2,500 man-hours of craftsmanship over 18 months at a cost of €300,000.

The Silver Spectre’s new coach built bodywork, stretching from the car’s A-pillars to the tailgate is topped by a light carbon-fibre composite roof to keep extra weight to a minimum. Inside the roof is finished by a statement hand-made ‘infinity starlight’ fibre-optic headliner, with stars fading towards the rear to give the impression of an endless starlit sky.

The luggage area with its chiselled lines, reminiscent of a classic speedboat, features padded leather upholstery, complementing the cabin’s interior, and is equipped with a bespoke picnic hamper trunk.

First registered in its Wraith guise to Rolls-Royce Motor Cars, The Silver Spectre is offered by its second custodian who oversaw the conversion. This majestic motor car has covered fewer than 18,000 kilometres from new, and a mere 200 kilometres since its conversion.