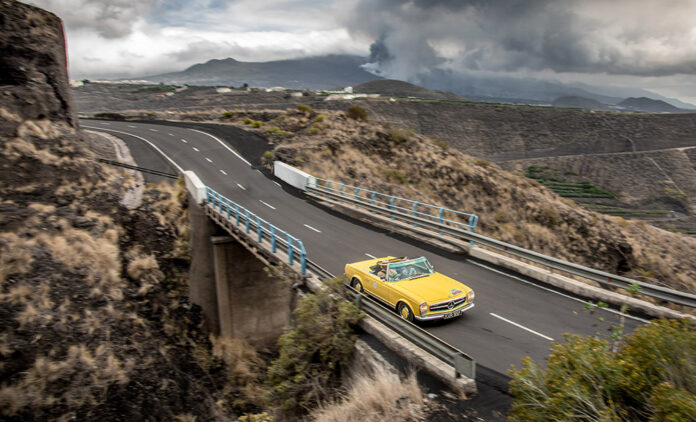 Leading international classic rally organiser Bespoke Rallies has a string of firsts to its name, and has just added another with Grand Tour Canarias – a successful 19-day, seven-island expedition of the Canary archipelago, including La Palma while the Cumbre Vieja volcano was in full flow.

Never before has such an event taken in all seven of the region’s main islands, hopping between the familiar destinations of Fuerteventura, Lanzarote, Gran Canaria and Tenerife before heading west to the lesser-known haunts of La Palma, El Hierro and La Gomera. The highlight of an unforgettable rally was undoubtedly getting up close and personal with La Palma’s active volcano, that has now been erupting for some weeks, and the reactions of some of the doughty participants were encapsulated for posterity by BBC television news. Said Bespoke Rallies Director John Brigden: “Experiencing the full force of nature at such close quarters is something none of us will ever forget, though I have to admit we weren’t all that sorry to move on once we’d done so! We were close enough to be rained on by volcanic ash, but far enough away to be out of danger from the lava flow.”

Eighteen crews took part in this latest Bespoke Rallies adventure in an eclectic array of machinery, the oldest of which was a splendid 1923 Bentley. Among the drivers were Formula One engine supremo Mario Illien and former McLaren F1 team manager Alastair Caldwell. Added Brigden: “It was wonderful to see a group of classic car enthusiasts back doing what they enjoy most after the restrictions of COVID – ie revelling in each other’s company and enjoying their cars to the full.”

The next event on the packed Bespoke Rallies schedule is the Dakar Enduro (February 28 – March 20, 2022). Full information on this and all the company’s other innovative offerings is available at www.bespokerallies.com.