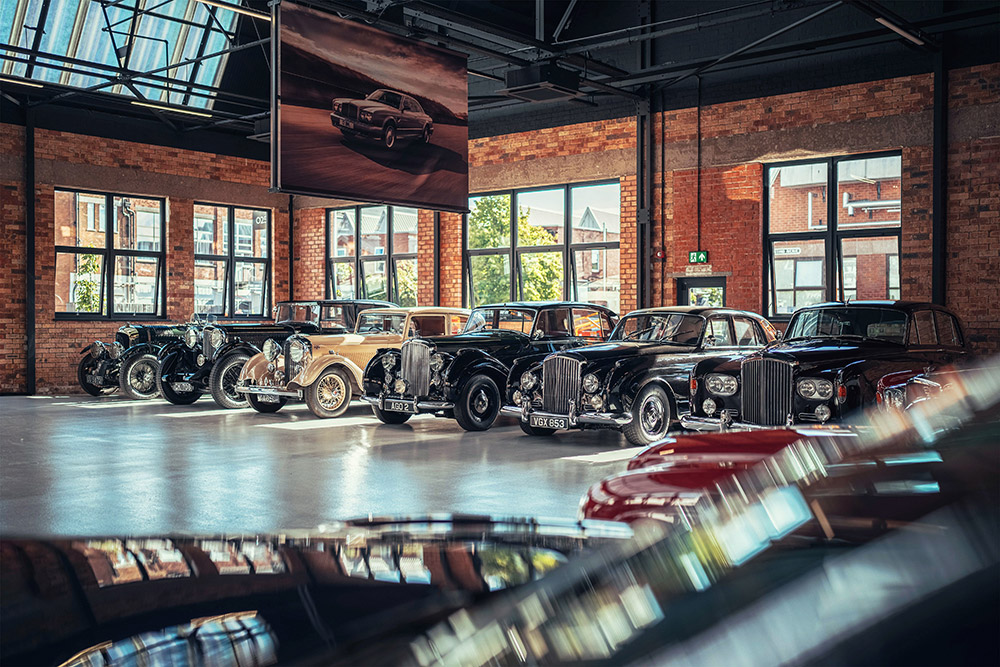 Part of the original Crewe factory site has been repurposed as a home for some of the most historically significant Bentley models from the last 103 years of company history. The Heritage Garage complements the existing Bentley Lineage exhibition in CW1 House, providing a showcase for the 42-car-strong Bentley Heritage Collection. The Heritage Garage will house 22 cars from the Collection, currently spread from 1919 onwards but eventually focusing on those members of the fleet built in Crewe – everything from 1946 onwards.

The new facility means that every member of Bentley’s Heritage Collection is now kept on the Bentley campus, for the first time ever. The Collection has undergone a significant development and expansion programme over the last 18 months, and now represents the entire company history.

Visitors to Crewe, whether customers, VIPs or media guests, will now be able to view an unbroken chain of Bentley production models, all kept in perfect working order and road-legal condition. By next summer, the Collection will be split across three different areas. Significant Cricklewood models (1919-31) and Derby-era Bentleys (1931-39) will live in a soon-to-be-redeveloped display in CW1 House, while the Heritage Garage houses Crewe-built models. Meanwhile, the eight motorsport cars in the Collection (including Speed 8s from Le Mans, Ice Speed Record and Pikes Peak cars and GT3 racers) will form a separate display.

A New Showcase
The Heritage Garage is located within the original 1930s brick-built factory and was previously the ‘project forum’, where models such as the 2003 Continental GT were planned and developed. The light and airy setting is at heart of the factory and is visible to Colleagues as they walk through the factory. The Garage is also being used as an event space for external presentations and internal briefings, surrounded by the beautiful line-up of vintage Bentleys.

As the company continues its Beyond100 journey of transformation, the Heritage Collection plays an important role by providing a clear picture of where the Bentley of today comes from. Heritage Collection vehicles are also shown and driven at major events throughout the world, from Pebble Beach to Mille Miglia.

“Having now rebuilt the Collection to fully chart our history, we have an ongoing commitment to add to it with each significant new model we launch. For example, the Collection now includes the 2019 Bentayga Hybrid, which was both the first-ever plug-in hybrid Bentley and an important step in our ‘Beyond100’ strategy towards electrification. As we continue to evolve, we want our guests and colleagues from all areas of the company to be able to share the rich history of Bentley Motors. The Heritage Garage brings that history to vivid life, and means we can actively reference our past while setting the course for our future.” – The Head of Bentley’s Heritage Collection, Mike Sayer.

Heritage Collection Examples
Every one of the 42 cars in the Collection has some special significance in Bentley’s history.

The Cricklewood section of the Heritage Collection contains some of the most iconic pre-war Bentleys on the planet. The starting point is EXP2, the second car built by W.O. Bentley and the oldest Bentley in the world. Two Blowers – one of them Team Car #2, the most valuable Bentley in existence – come next, along with a 1929 Speed Six, and the 1930 8 Litre that was W.O.’s personal car for two years.

Bentley’s Mark VI was both the first car to emerge from the Crewe factory and an instant sales success. The Heritage Collection example, AGO 2, is finished in two-tone green over black and provides a vital link between the 4 ¼-litre Embiricos of 1938 and the iconic Type R Continental of 1952.

The Jack Phillips designed aluminium alloy V8 engine, which made its debut in 1959, provides another important narrative link. In naturally-aspirated form it powered the Heritage Collection’s elegant 1963 S3 Bentley Standard Saloon, 176 FGH, and the convertible Bentley Continental of 1984 – A455 YGJ being the Chairman’s own company car.

Bentley’s sales and global fame saw a dramatic improvement when the 6.75-litre V8 was turbocharged. Examples of this powertrain in the Heritage Collection include the 1991 Turbo R and the 2001 Arnage Red Label, the first model produced under Volkswagen Group ownership. Finished in Fireglow red, Bentley’s Heritage example marks one of the turning points in the company’s history.

The 6.75-litre V8 continued the Bentley tradition of effortless torque all the way through to 2020. In its final iteration as the powertrain for the Mulsanne, the leviathan V8 developed 512PS and 1020Nm of torque, for a top speed of 184 miles an hour and a 0-62mph time of 5.1 seconds. The Heritage Collection’s Mulsanne was the second ever model off the production line, chassis 000002. It is finished in Imperial Blue with an interior trimmed in Shortbread.

The Continental GT, launched in 2003, sparked a revolution for Bentley and Crewe, propelling the company from a maker of less than 1,000 highly coachbuilt cars a year to more than ten times that figure. The Heritage Collection’s chassis VIN 20001, a right-hand drive model in Cypress Green, was the very first Continental GT off the Crewe production lines.

Bentley soon became as noted for the compact and immensely powerful 6.0-litre W12 engine as it had been for the 6.75-litre V8. Heritage Collection models powered by the W12 include three generations of Flying Spur and both generations of the high-performance Continental Supersports coupé. Also powered by the versatile W12 is the 2016 ‘first of line’ Bentayga, chassis 00001, one of the most significant models launched in Bentley’s 103 year history.

Meanwhile, the advanced Bentley 4.0-litre V8 is represented in the Heritage Collection by the Continental GT V8S , launched in 2014. The first all-new Bentley V8 since the mid-1950s, a newer version of 4.0-litre V8 today is offered across every Bentley model line.