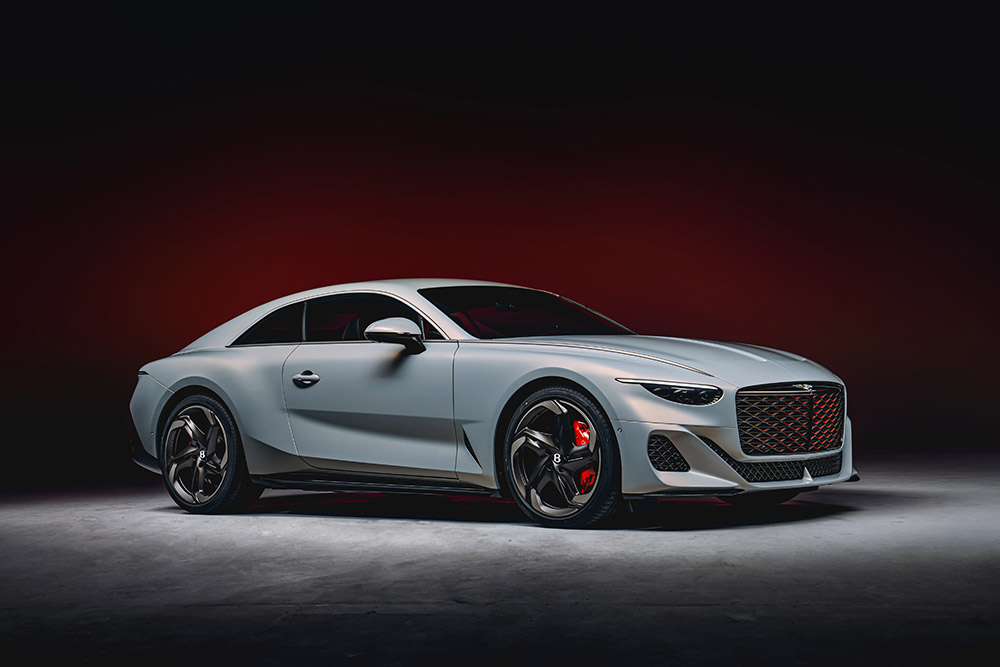 Bentley Motors has today unveiled the Bentley Mulliner Batur – a new two-door grand touring coupé limited to 18 series pieces that embodies the start of a design revolution at Bentley.

Created by Director of Design Andreas Mindt and his team, the Batur is a showcase of a new design DNA that will ultimately guide the design of Bentley’s future range of Battery Electric Vehicles (BEVs).

The collection of just 18 series examples of the Batur is the latest project by Bentley’s in-house bespoke and coachbuilding division, Mulliner, and succeeds the Bacalar – a run of 12 individually specified, designed and handcrafted Barchettas that relaunched coachbuilding at Bentley. Like its predecessor – the Bacalar – the Batur is named after a beautiful natural body of water. Lake Batur is an 88m deep, 16 km2 crater lake in Kintamani on the island of Bali, Indonesia, and provides nutrient-rich water to both local hot springs and agriculture.

The Batur will also be the most powerful Bentley yet, with a 740+ PS version of the iconic, hand-assembled 6.0-litre twin-turbocharged W12 engine that has metaphorically and literally powered Bentley’s success for the last two decades. As the engine enters its twilight years as part of Bentley’s Beyond100 transformation journey to being fully electrified, the Batur forms the first part of a celebration of the W12’s extraordinary power, torque and refinement. Engine performance will be matched to the most advanced Bentley chassis ever, with Speed-tuned air suspension, electric active anti-roll control, eLSD, four-wheel steering and torque vectoring.

All 18 examples of the Batur have already been reserved. Each one will be designed collaboratively with each customer, guided by Mulliner’s in-house design team. Customers will be able to specify the colour and finish of practically every surface of the Batur, to create a car as individual as they are. Each one will then be handcrafted over the course of several months in Mulliner’s workshop at Bentley’s carbon neutral factory in Crewe, England, with first deliveries expected in mid-2023.

The Batur was unveiled at Bentley’s Signature Party at Monterey Car Week, in front of almost 500 VIP guests, by Bentley’s Chairman and Chief Executive, Adrian Hallmark, who comments:

“The Batur is a significant car for Bentley. Far more than the heir to the highly successful Bacalar, the Batur showcases the design direction that we’re taking in the future as we develop our range of BEVs. Andi Mindt and his team have reimagined the classic Bentley design cues into a stronger, bolder design that remains both elegant and graceful.

“Beneath the beautiful exterior lies the most powerful engine we’ve ever developed. Our W12 engine is easily the most successful twelve-cylinder automotive engine in history, and as it approaches its retirement to make way for future hybrids and BEVs, we want to mark its accomplishments.

“The 18 lucky customers who have already reserved their Batur will enjoy an unrivalled co-creation experience with our Mulliner Design team in specifying their cars. The Batur is the next step in Mulliner’s expansion, demonstrating the demand for truly bespoke vehicles that combine luxury and performance in ways that only Bentley can deliver.”