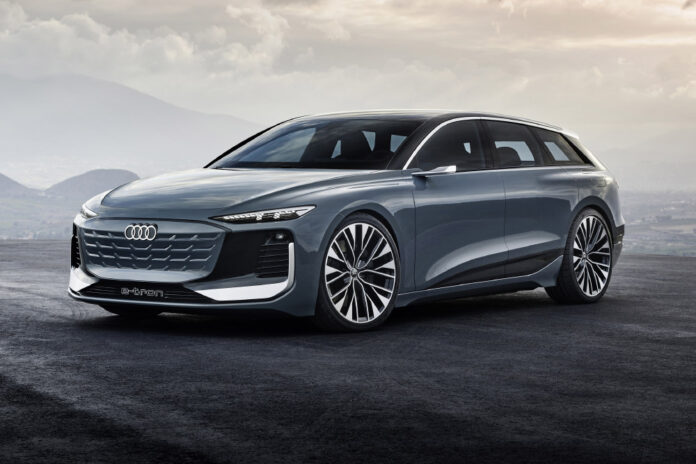 Audi A6 e-tron concept, the second: as part of its 2022 Annual Media Conference, Audi is presenting the next model in its future electrically-powered A6 Luxury Class: the Avant. The company with the four rings introduced the Audi A6 Sportback with an electric drive system almost a year ago at the Shanghai Auto Show in April 2021. The production-oriented A6 Avant e-tron concept car now illustrates the synthesis of pioneering drive technology and Audi’s traditional design world: the Avant.

Like the Audi A6 e-tron concept that was exhibited in 2021, the A6 Avant also has an exclusively electric drive system based on the forward-looking PPE platform, developed under Audi’s leadership. At the same time, it represents a new design concept with the same dimensions as the A6 Sportback e-tron. At 4,960mm (16.3 ft.) long, 1,960mm (6.4 ft.) wide, and 1,440mm (4.7 ft.) tall, its proportions put it in the luxury class. Its lines are a consistent development in Audi’s contemporary formal language. Significant elements like the closed Singleframe and the continuous strip of lights in the rear emphasize its kinship with the other electrically powered Audis in the e-tron fleet.

The Audi A6 Avant e-tron concept exterior model that is making its debut in March 2022 is not just a simple design exercise. Its lines and elegant proportions preview future Audi production models and offer clues about how dynamic and elegant the electrically-powered luxury class will look.

“With the Audi A6 Avant e-tron concept, we are offering a completely tangible look at future production models on our new PPE technology platform. We’re not just electrifying the Avant’s successful 45-year history. What we want most of all is to use technical skills to add an exclamation point. In particular, this includes powerful 800-volt technology, 270 kW of charging capacity, and a WLTP range of up to 700 kilometres (435 miles).” – Audi Board Member for Technical Development Oliver Hoffmann

Sporting the A6 emblem, the concept car underscores its place in the brand’s business class. This family has represented the brand in one of the world’s highest-volume segments since 1968 (until 1994, as the Audi 100). There have been Avant models in the series since 1977 – a revolutionary, very emotionally designed reinterpretation of the station wagon class.

With the Avant, whose dynamic lines combine with a high degree of variability, the company created a new kind of car that has often been copied by the competition. Avant, a term derived from avant-garde and a 1995 Audi ad slogan, is a word that has taken off: beautiful station wagons are called Avant.

For its part, the PPE technology will ensure that what the car’s lines imply is translated into a standard of dynamic driving performance and everyday suitability befitting use for long drives. That means that, in the future, an Audi A6 e-tron will deliver up to 700 kilometres (435 miles) of range (under the WLTP standard), depending on the drive system and model variant. And the strongest representatives of the series will sprint from 0-62mph in less than four seconds. The values of the Sportback and the Avant only deviate slightly from one another.

The Audi A6 Avant’s back end, which is as beautiful as it is spacious, is by no means the only thing that qualifies it as the storage champ – the drive system and battery technology also justify that title. With its 800-volt system and a charging capacity of up to 270 kW, it can take in enough energy in just 10 minutes at a fast-charging station to drive about 300 kilometres (186 miles).

To the Limit and Beyond: Audi Tests Again for the Dakar Rally in Morocco

Audi e-tron GT Wins the Golden Steering Wheel as the Most Beautiful Car of the Y...