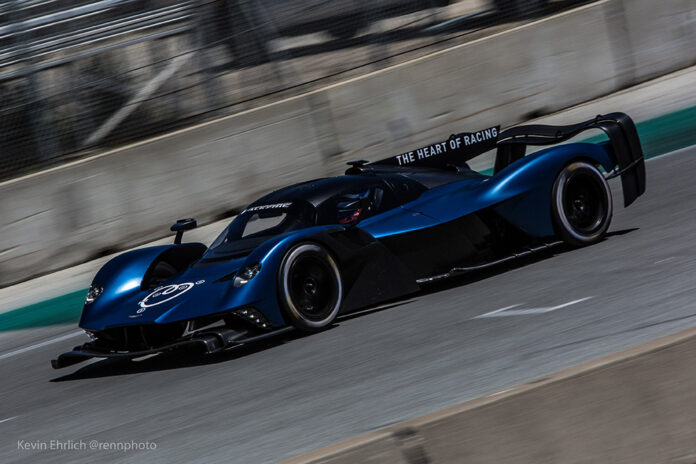 It takes a lot to stand out in a paddock stuffed with the best from McLaren, Ferrari, Mercedes, Bugatti, Pagani, Lamborghini, and Koenigsegg. On a quiet Saturday morning when a pair of Aston Martin Valkyrie AMR Pro examples rolled into the Laguna Seca pit lane, every cell phone camera on the property was trained in their direction.

The AMR Pro is not an ordinary machine. The details from hours of effort and computer design are everywhere. Weight has been purged. Nothing unnecessary has been retained. Even small things like the rear tail lights look more like something from the space program rather than the automotive world. The rear engine cover has gills rather than vents. The car wears the front splitter, massive rear wing, diffuser and assortment of scoops as a medieval knight wore armor. 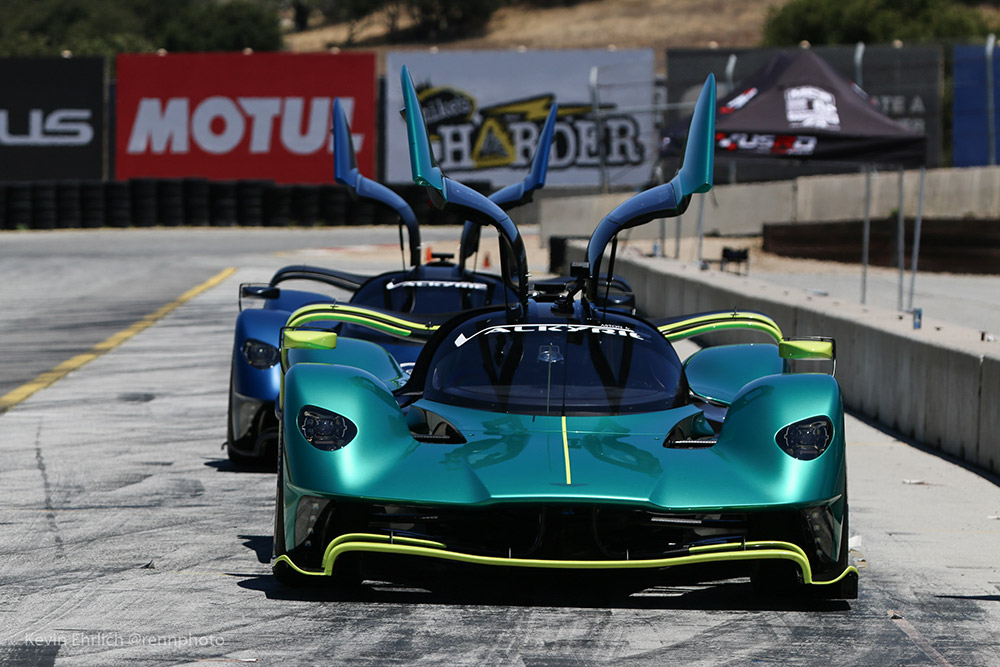 The Valkyrie traces its origins to a 2016 joint project between Aston Martin, Red Bull Formula One team and its designer Adrian Newey and engineering partner Multimatic. The target at the time was a new hypercar class at the 24 Hours of LeMans. The initial plan to contest LeMans was shelved in 2020 as the technical regulations were finalized and Aston Martin’s original vision didn’t sit as neatly as hoped. In addition, Aston Martin went through a change of leadership and a renewed focus towards Formula One.

While Aston Martin was not headed to race at LeMans, the work to create the Valkyrie hypercar and its trackday variant was not wasted. The silver lining for the AMR Pro track day version is that Aston Martin no longer needed to concern itself with LeMans regulations. The closed-cockpit land missile gets Aston Martin customers a fraction away from the experience of driving a Formula One car or a LeMans prototype. The AMR Pro takes the hypercar concept as close as possible to a competitive race car without sticking a number plate on the door and lining up on a starting grid. 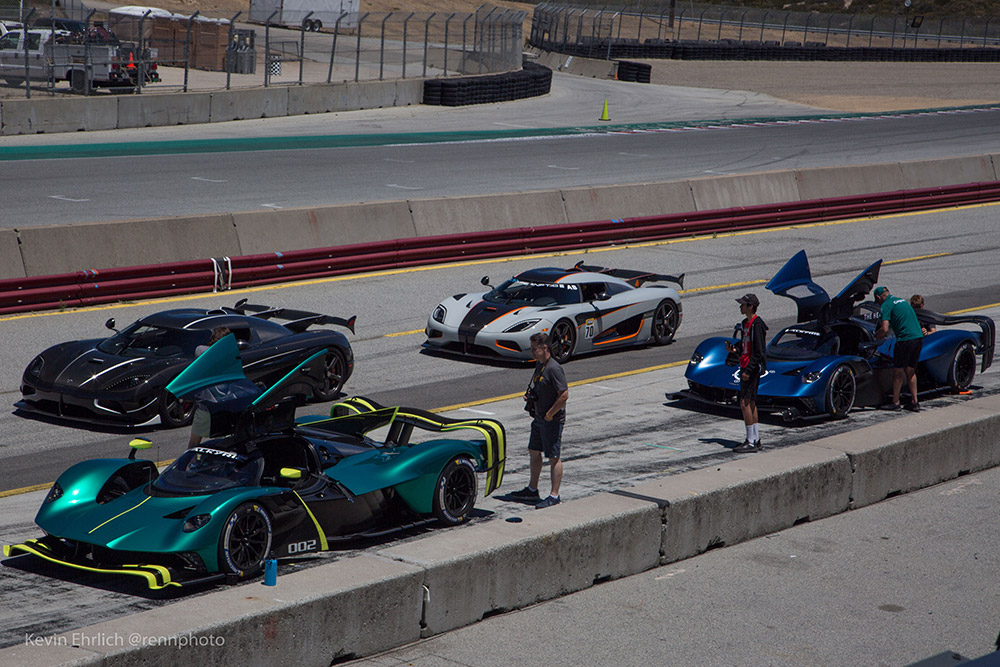 For Hypercar Invitational, Aston Martin brought the first of two factory prototype/mules. Decked out in Aston Martin Racing Green with yellow trim, the plate on the doorsill showed “002-201.” This car is the first for project 002, the internal designation for the Valkyrie AMR Pro. The Valkyrie coupe road car was AM-RB 001 (for “Aston Martin” and “Red Bull”).

If one wasn’t enough, the 14th of 40 customer AMR Pro examples joined the fun courtesy of the well-known Heart of Racing sportscar team. The Satin Ming Blue livery matched the cars raced the team in IMSA competition. It was the first US customer car to be delivered and Ian James chauffeured guests around the circuit. 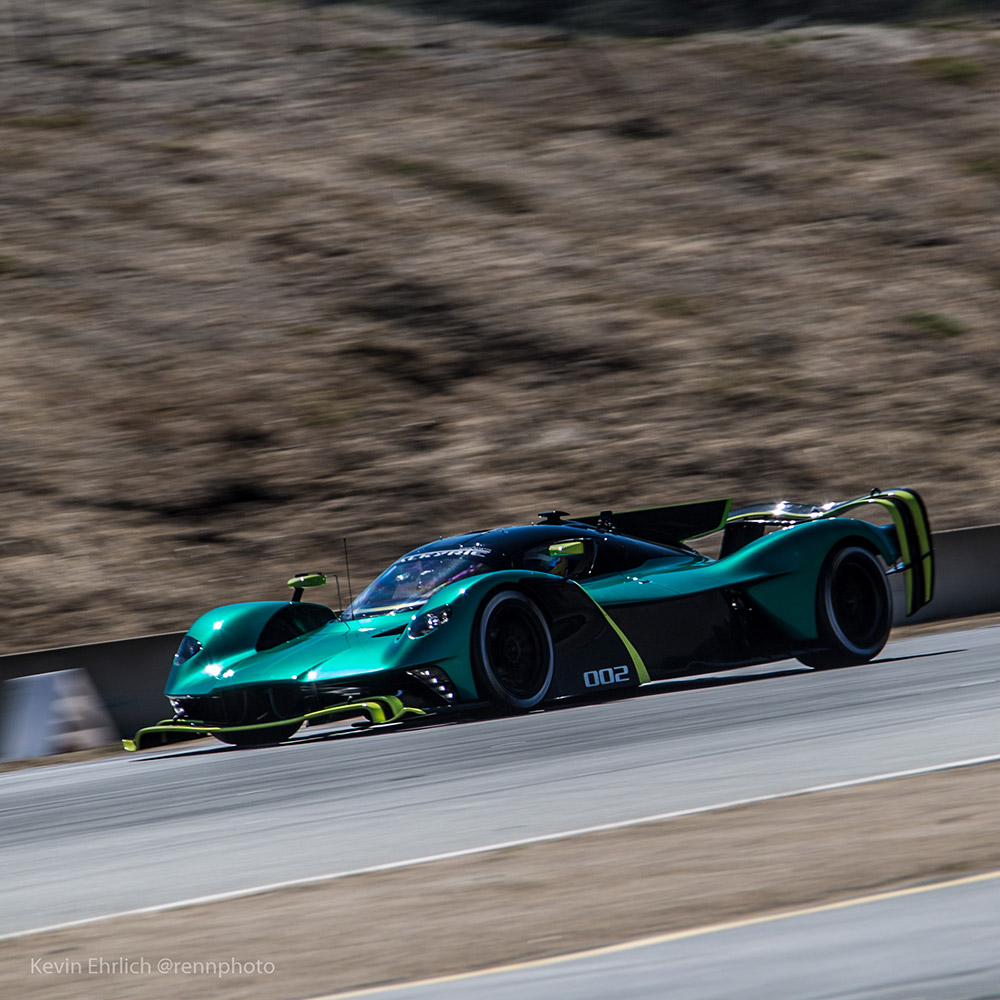 The Valkyrie AMR Pro made its public debut with demonstration laps during the Bahrain Grand Prix weekend in March. Other than privately running the Valkyrie AMR Pro at Miami Homestead speedway for invited media earlier in May, Hypercar Invitational was the first opportunity in the US for others to see and hear the car at speed. Multimatic and AMR Pro development driver Andy Priaulx gave rides to invited guests throughout the weekend.

The 6.5 liter V-12 engine is monstrous. The AMR Pro sheds the hybrid electric powertrain of the road car and opts for a normally aspirated 1,000 horsepower Cosworth powerplant that revs to 11,000 rpm. An electric starter gets things going from a standstill before the internal combustion engine roars to life. Inside the cockpit, the noise is not an ear piercing shriek but there is zero chance of conversation between driver and passenger. Formula One fans of the early 1990s will recognize the engine note and lament its absence from modern Formula One grids.

Is the Valkyrie AMR Pro fast? Yes. Violently fast. This is not a machine for the casual weekend warrior looking for high speed kicks. Once the tires got warmed up, the car rocketed through the corners. It wasn’t all about power through. The sculpted bodywork managed the air and produced gigantic amounts of downforce. Under heavy braking, a passenger without a HANS device to hold their helmet steady is powerless to keep their chin from bouncing off of their chest. 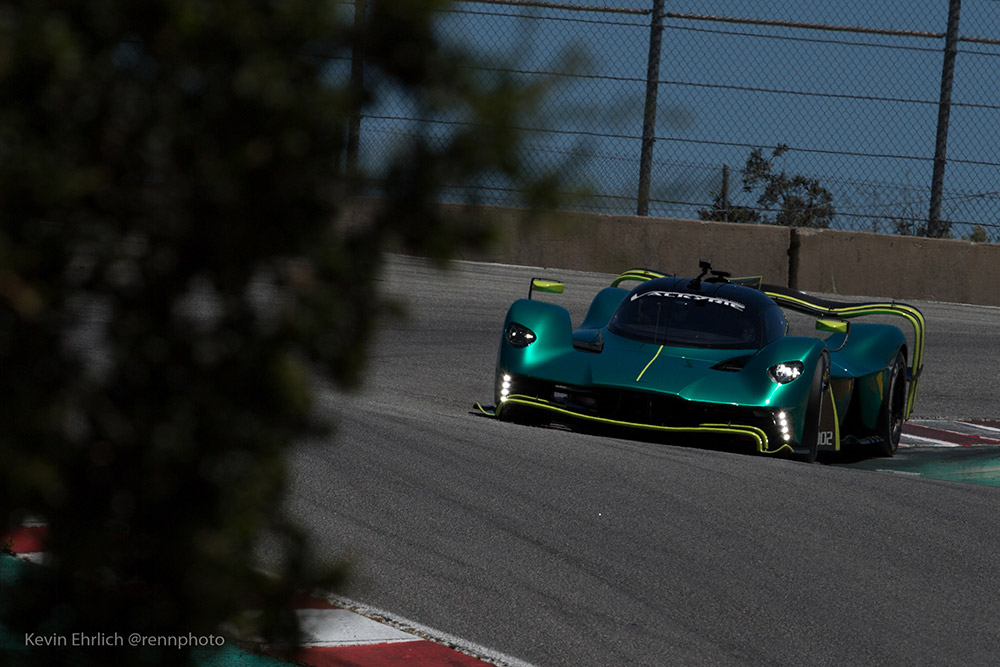 Aston Martin estimates that the AMR Pro could circulate the full LeMans course in 3 minutes 20 seconds. Ironically, Hypercar Invitational was held on the same weekend as the 2022 24 Hours of LeMans. Guests watched the race on a big screen in the paddock while also watching the pair of Valkyrie AMR Pros lap around Laguna Seca. The top three cars at the head of the LeMans grid in France logged qualifying times in the 3 minute and 27 second range. That means the AMR Pro is faster than the cars in the LeMans class it originally was designed to contest. Of course, the comparison comes with a big caveat because the AMR Pro makes no concession to meeting regulatory specifications.

Passenger laps during the weekend unofficially logged times in the high 1:18 and low 1:19 range. The car, however, had more to give. It was not set at its lowest ride height, the engine was dialed back to use only 800 of the available 1000 horsepower, and the tires were long-run track day rather than optimized soft race rubber. In addition, the Priaulx was hauling ballast of passenger weight and only running at six or seven tenths effort. For a track day special to even be in a similar neighborhood as a modern single-seat open-wheel Indycar that gets around Laguna Seca in the 1:10 range is amazing. 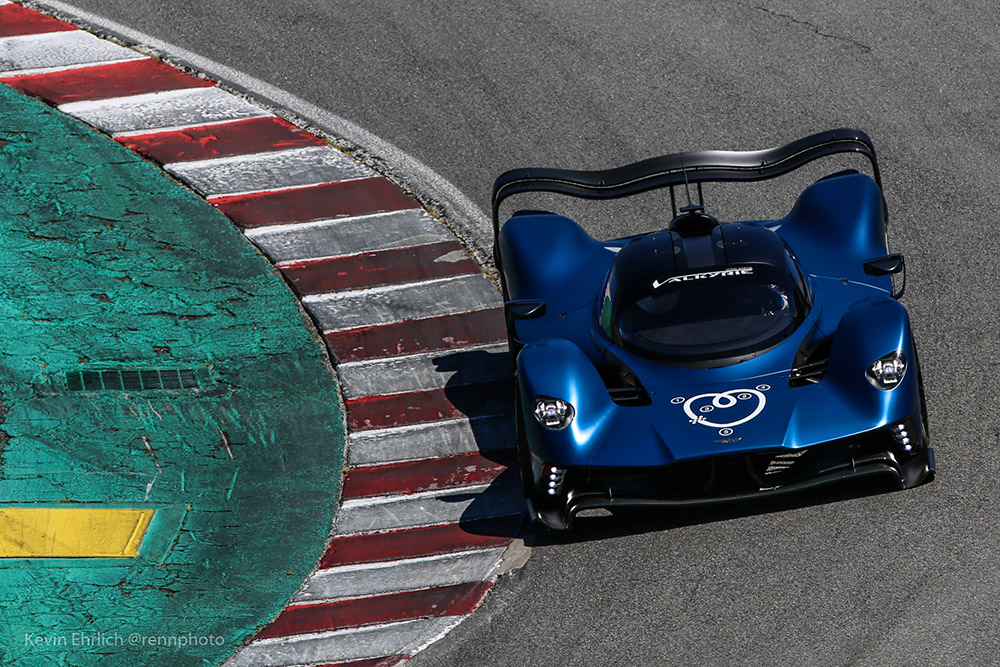 One of the special aspects of Hypercar Invitational is the chance for guests to learn about the story behind the car. Aston Martin personnel brought their car to a dinner to tell the story of the AMR Pro. Aston Martin fully supported the Hypercar Invitational, bringing other Astons and supporting customer cars such as a Vulcan. In addition to the large crew of staff in Aston Martin racing gear, Ben Collins was along as well. Top Gear fans better know Mr. Collins as The Stig. 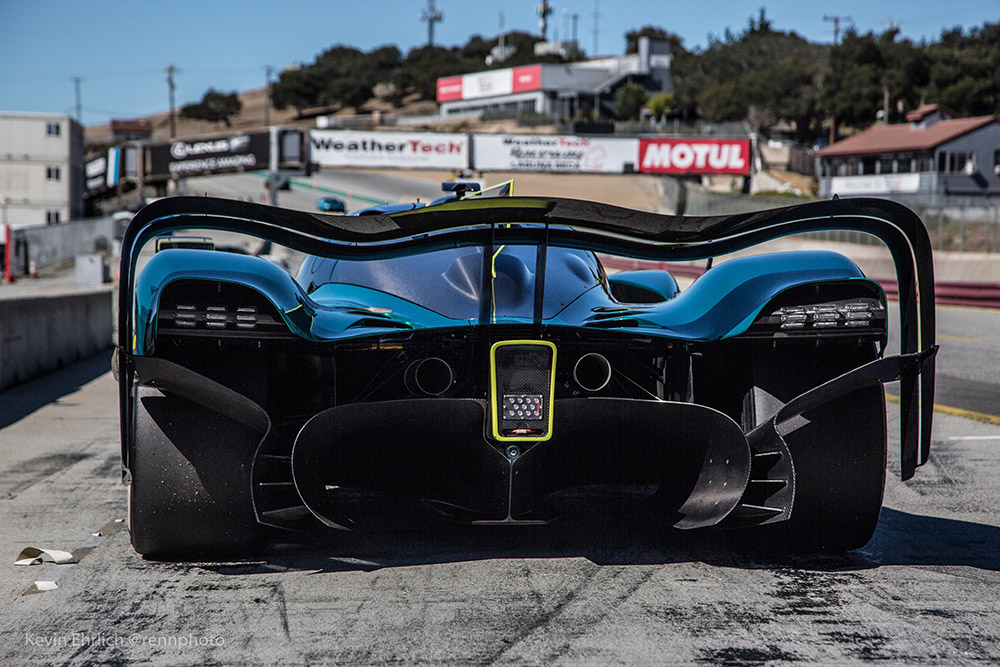 Some Valkyrie AMR Pros might end up in protected garages or museums. However, the Heart of Racing team expects to set lap records with their machine, so hopefully more people will get a chance to see and hear this beast at speed.

Thanks to Aston Martin, The Heart of Racing and Hypercar Invitational for making it all happen.