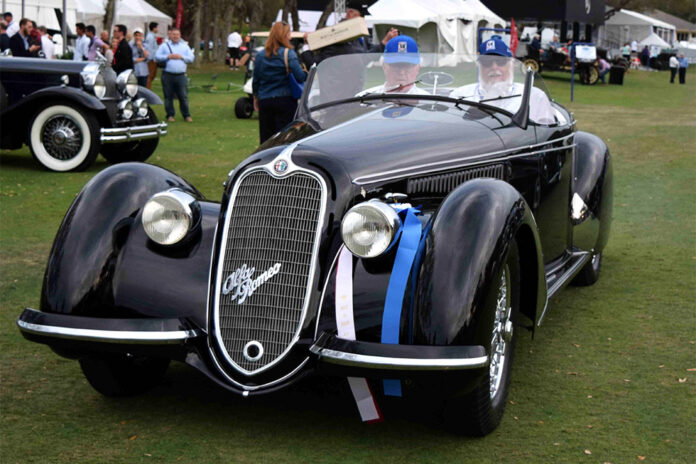 Only weeks before the international collector car world gathers in Northeast Florida for the eagerly awaited Amelia Island Concours d’Elegance, the event’s Founder and Chairman Bill Warner offers an insider’s look in the newest installment of The Brumos Collection’s special video series “Inside The 59.”

Connecting a global audience of collector car and motorsports enthusiasts with the treasured vehicles and prominent individuals that have symbolized the Brumos brand for decades, the popular video series posts to Brumos Collection social channels today.

The ninth episode in the series, “A Conversation With Bill Warner From the Amelia Island Concours”

fondly recalls the earliest days of the event and traces its rise to prominence, while emphasizing the essential role of Warner’s seven-decade relationship with the Brumos brand.

“My relationship with Brumos goes back to my teenage years, when I drove a parts truck for Al Sager Volkswagen in Jacksonville,” Warner recalls. “I was aware of Mr. Brundage long before there was a Brumos. They were selling Porsches out of the Volkswagen operation until 1962, when they formed Brumos.”

That treasured relationship was invaluable in Warner’s concept for a prominent Concours in Florida, its execution and ultimately, its position as one of the collector car world’s most influential gatherings. “Every major show has great collections in their backyard they draw from,” Warner explains. “The Brumos Collection has a phenomenal selection of cars, which can make or break the excitement that you’re trying to produce with a Concours d’Elegance. It’s extremely important to have such a significant inventory of just within miles of where we’re putting on the show.“

Warner is equally proud of his role in The Brumos Collection itself, which opened in January 2020.  A lifelong photographer with an understandable passion for all-things-automotive, Warner speaks with pride as he notes the display dozens of his images shown throughout the facility. “During the Collection’s planning stages, they wanted to have some of my work. I was happy to provide photos of great drivers like Hurley Haywood, Peter Gregg and Roger Penske, who drove for Brumos in 1959 and 1960. I’m proud to share these images, many of which date back 50 years.”

Looking ahead, Warner says the 2021 Concours will emphasize the impact of electric cars, both historically and as a path toward the future of automotive technology and manufacturing.  “We’re going to trace the history of electric cars, from a 1895 Morris and Salom Electrobat IV to a number of brand new prototypes and current models like the Mustang Mach-E,” he explains. “We’re also hoping for the all-electric Cadillac Lyriq, as well as the rear-wheel Porsche Taycan. We’re expecting seven manufacturers showing new electric cars.”

Beyond the hundreds of stunning collector cars representing virtually every domestic and import brand, the Concours will feature a special “Chevy Thunder” display, with almost two dozen cars tracing Chevrolet racing history. Highlights will also include special appearances by automotive and motorsports industry luminaries, including racers, designers and executives.

Warner’s interview with “Inside The 59” can be accessed via The Brumos Collection social channels:

Previous articleDayco Amps Up Race Program, Backs 5 Extreme Drift Teams
Next articleGoodwood to Celebrate the Life and Career of Sir Stirling Moss at its 2021 Events