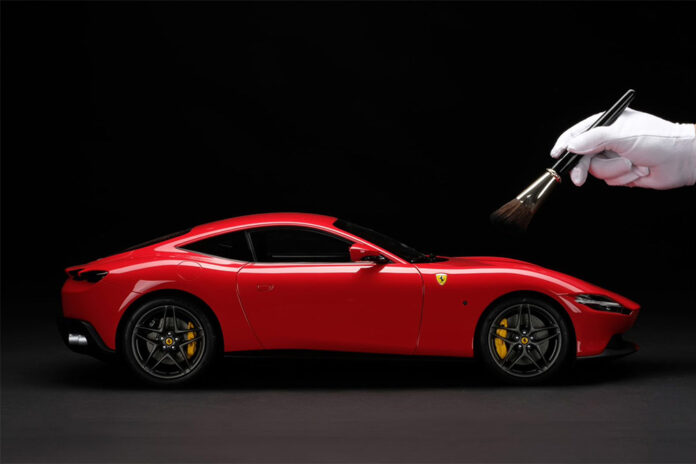 The master craftspeople at Amalgam Collection have spared no effort in meticulously creating the Ferrari Roma, doing justice to Ferrari’s contemporary representation of the 1950s and 60s carefree and pleasurable way of life. Each of the 1:8 scale models are meticulously hand-painted and detailed by the artisans at Amalgam’s workshops, and the team work closely with Ferrari to capture every single detail of the timeless elegance and distinctive flair of the original car.

Amalgam has been creating fine model cars since 1995, and the fundamental reasons for the exquisite quality of their models are revealed when you take a closer look at the journey from concept to finished piece that takes place within Amalgam’s workshops.

So how did Amalgam capture la nuova dolce vita of the Roma in model form? The Amalgam team were able to work from detailed original CAD data, provided by Ferrari themselves, to produce perfectly accurate master ‘patterns’ of each individual car part at 1/8th of the real car size. “Once we have all the patterns in hand, they are hand fettled so that they can be tightly assembled in a well-engineered fashion,” says Sandy Copeman, founder of the Amalgam Collection.

For this particular 1:8 scale model, the process of developing and creating the master patterns has taken over 3500 hours. These patterns are then used to create silicon rubber moulds that capture every meticulously scaled detail. Some parts of the Roma model are machined or cast from metal, while the major components are hand cast using prototyping resin poured into the silicon moulds. The prototype was then hand-assembled by Amalgam’s artisans. Only once the model has passed the intense and detailed scrutiny of Ferrari’s engineering and design teams, can the subsequent models be built. Each model takes up to 450 hours to machine, cast, hand fettle, paint, polish and assemble.

“If you can take a high-resolution photograph and put it in front of somebody, and they have no idea whether they’re looking at a model or the real car, then we’ve done our job”

Amalgam has paid homage to the historic Rosso Corso with a limited edition of 99 pieces, or as a fully bespoke tailer-made build for owners of the real car. Amalgam offers a special bespoke service, available especially for owners of the real car, and will create a superbly and deeply detailed model replicating every aspect of a car’s specification using authentic paints, including every detail of the interior finishes, right down to the colour and pattern of the stitching on the seats. The goal of every model made in Amalgam’s workshop is perfection.

The Ferrari Roma model mentioned above is available from www.amalgamcollection.com.