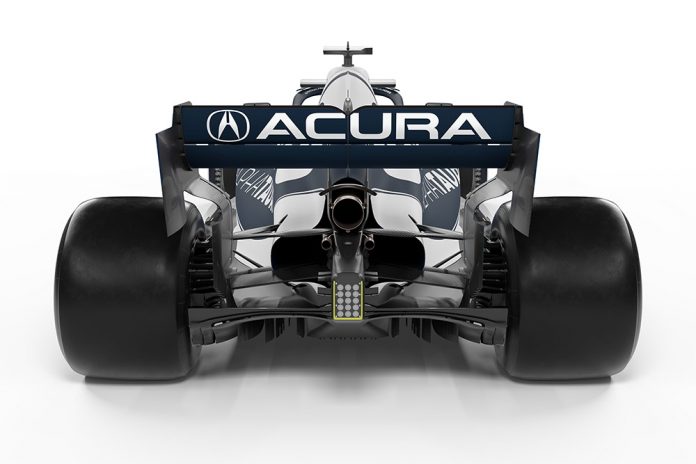 Acura is back in Formula 1!  Returning to the pinnacle of motorsports for the first time in more than a decade, Acura livery will appear on the rear wings of the Red Bull Racing Honda and Scuderia AlphaTauri Honda Formula 1 cars for the Aramco United States Grand Prix at Circuit of the Americas in Austin, Texas Oct. 22-24. Celebrating its role as the performance division of Honda in North America, Acura also will appear on the driving suits and helmet visors of Red Bull drivers Max Verstappen and Sergio Perez and Scuderia AlphaTauri drivers Pierre Gasly and Yuki Tsunoda during the race weekend.

“It’s very special to have Acura become part of our partnership with Red Bull Racing Honda and Scuderia AlphaTauri Hondafor the United States Grand Prix 2021,” says Masashi Yamamoto, Honda F1’s Managing Director. “This has been an incredible F1 season so far and we are proud to add the Acura brand to our story for this iconic F1 race in America.”

This is not the first time F1 legends have featured Acura branding. From 1989 to 1992, Honda F1 drivers including Ayrton Senna and Alain Prost wore Acura visors at the Canadian and U.S. Grand Prix. Most recently, Jenson Button and Rubens Barrichello displayed the Acura logo on their visors for the 2007 Canadian Grand Prix.

“I’ve been a huge Formula 1 fan my whole life, and as a kid growing up in Canada I remember seeing Acura on the helmets of Senna and Prost at the Canadian Grand Prix,” said Emile Korkor, assistant vice president of Acura National Sales. “Motorsports competition is extremely important for a performance brand like Acura and we couldn’t be more excited about our partnership with Red Bull Racing and Scuderia AlphaTauri for this race.”

Racing is a key expression of Acura’s commitment to Precision Crafted Performance. Acura has a significant motorsports presence in North America with the brand sweeping the IMSA WeatherTech SportsCar Drivers’, Manufacturers’ and Teams’ Championships in both the DPi and GTD racing classes in 2020. Acura also won its first-ever overall victory at the grueling Rolex 24 of Daytona this year, with the Acura ARX-05 piloted by Wayne Taylor Racing.

“Over the past five years, Acura has demonstrated an unyielding commitment to Precision Crafted Performance on the road as well as on the track,” said Jon Ikeda, Vice President and Acura Brand Officer. “This weekend we celebrate our role as the performance division of Honda and are thrilled to be back in Formula 1 for the first time in almost 15 years.”

On the street, Precision Crafted Performance is exemplified with a product lineup delivering world-class engineering, driving dynamics and technology. Reintroduced to showrooms this year, Acura’s Type S performance brand is recognized by driving enthusiasts who seek a more dynamic driving experience with enhanced power, handling and braking. Simply the best-performing sedan and SUV in Acura history, the turbocharged TLX Type S and MDX Type S push the joy that comes from an emotional driving experience to new heights. The new limited-production 600 hp NSX Type S supercar is the most powerful and best performing Acura ever.