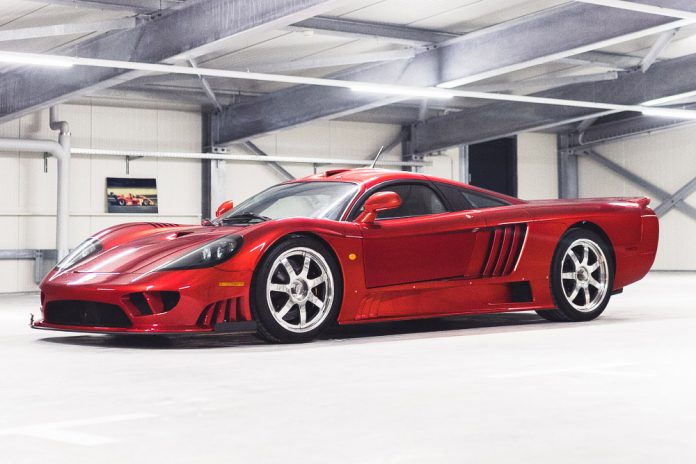 The front and rear diffusers, along with the rear spoiler, were revised to increase the downforce by 60 percent. Mated to the engine is a six-speed manual transmission that carries power to the rear wheels via a limited-slip differential. The 0-60 mph time was estimated to be 2.7 seconds with a top speed of 248 mph. Only 30 examples of the S7 Twin Turbo were produced between 2005 to 2006.

The purchase invoice that accompanies the car states that this S7 Twin Turbo was ordered on 15 August 2005, by a buyer in Teufen, Switzerland. The seller was invited to test drive a Saleen S7 Twin Turbo by Steve Saleen, the company’s founder, at their headquarters in Corona, California. He was impressed by the performance, handling, and design of the S7 Twin Turbo and placed an order for one to be shipped to Switzerland. A copy of the original window sticker is present with the car.

This S7 Twin Turbo example was manufactured in August 2005, and left the factory in Irvine, California, with integrated roll protection, aluminium honeycomb impact-absorbing panels, and crumble structures front and rear. The fuel tank is mounted in the centre-position as a safety feature.

Outside, this S7 Twin Turbo is finished in the stunning Lizstick Red. It was fitted with the optional polished alloy wheels at a cost of $4,500. Specification extends to electrically operated door mirrors, tinted glass, projector beam headlights, and autoclave carbon fibre body panels. For aerodynamics, it features an integrated split-channel airflow throughout the car, advanced design front tray, side skirts, and an integrated rear body-width wing.

Inside, this example features modern comforts such as air conditioning, power windows, central locking, a heated front windscreen, rear-view camera, AM/FM radio with DVD TV, and an audio system. The S7 was also equipped with remote boot hatch release, with the storage spaces manufactured from carbon fibre. Further options include a black leather interior with performance sport seats, “S7”-embroidered floor mats, and a grey suede headliner. Aluminium trim and white accents, a leather steering wheel, 240-mph speedometer, and a centre-mounted tachometer complete the interior. At the time of cataloguing, the car’s odometer shows just over 780 miles; this car has proof of Swiss taxes paid, but is not currently road registered.

This S7 Twin Turbo presents an excellent opportunity to acquire one of Saleen’s first proprietary turbocharged vehicles. From its striking aerodynamic design to its modern amenity-laden interior, the S7 Twin Turbo is by all accounts a supercar—and a blisteringly fast example at that.