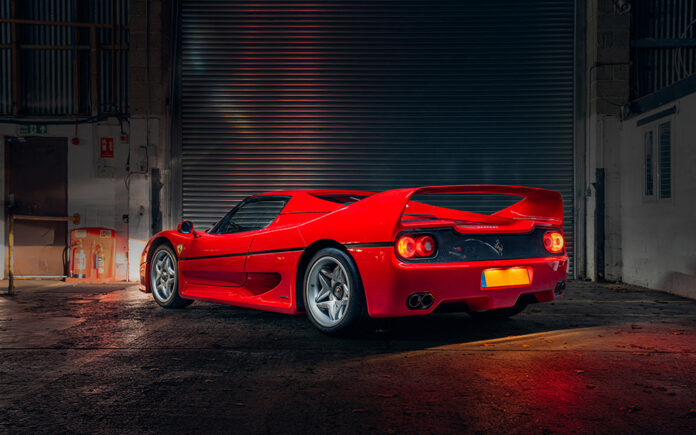 Described by Ferrari as the “closest thing to a road-going Formula 1 car the company had ever built”, the F50 burst out of the Maranello factory when production began in 1995—tipped as the marque’s most exciting flagship sports car yet. Created to celebrate Ferrari’s 50th anniversary, the F50 was powered by the new F130 B engine—a naturally aspirated 4.7-litre V-12 unit that followed the lineage of the 3.5-litre motor used by Scuderia Ferrari in Formula 1 a few years prior—utilising 60-valve cylinder actuation for 513 horsepower and 347 pound-feet of torque. The car was developed by Ferrari as a “halo” model to demonstrate the company’s propensity for performance, rated to launch the F50 to 60 mph from standstill in just 3.6 seconds, and topping out with an official top speed over 200 mph.

From the outset, the F50 gave an uncompromising, purist approach to performance. Drivers were freed from the interference of power steering, power-assisted braking, and ABS; a design ethos that produced maximum feeling on the road while in turn acting as a weight-saving measure. Contrasting the deliberate crudeness, designers in Maranello made good use of technologies that were relatively advanced for the time, factoring in highly sophisticated composite materials, employing construction techniques typical of a Formula 1 car, and building the car around a carbon fibre monocoque chassis. Using all of Ferrari’s motorsport derived technology resulted in a supercar tipping the scales at just 1,230 kilograms when dry.

Ferrari made 349 numbered examples of the F50 in a two-year production run, exclusively manufactured in left-hand-drive configuration. The model gained acclaim with customer deliveries around the globe, despite the limitations imposed by the position of its steering wheel and pedals—yet a limited number of owners explored options to customise this. This example, which was completed by the Maranello factory in March 1997, is one of an extremely limited number of F50s existent which were converted in period by official Ferrari coachbuilder Pininfarina to right-hand drive. A plaque affixed to the carbon fibre-clad transmission tunnel denotes that this car was customised by Pininfarina in December 2000, when it is thought that this F50 was converted from left- to right-hand-drive.

The 298th of the 349 numbered F50 models made, this example was registered in the U.K. by its first owner in August 1997, having originally been sold by Maranello Sales of Egham, Surrey. It is understood that the car was originally destined for the Australian market, while Tony Willis of the Maranello Archive verifies that it was first supplied in the U.K. From its first registration to when the vehicle was sold to its consigning owner in June 2011, the F50 wore a private registration. The workshop of the supplying Ferrari dealer maintained this F50 for the first few years, carrying out services in April 1998 and May 2000 to match the respective 6,250 and 12,500 maintenance intervals. The same workshop carried out another service when the odometer read 18,345 miles in May 2003. In September 2010, the Ferrari specialist Dick Lovett performed a 20,000 km service and a folder of accompanying paperwork attests to significant investment in the car with the workshop during that year. Throughout 2010, Dick Lovett inspected and reassembled the top-end of the engine and replaced faulty sections of the dashboard with factory-correct parts, further to regular maintenance tasks, as invoices on file from the workshop exceed £31,000.

The F50 was retained by the same family until 2011, when it was acquired by its incumbent owner. Dick Lovett continued to maintain the car with bi-annual services in 2013, 2015 and 2017, then the Ferrari specialist Bob Houghton assumed workshop duties with annual services in November 2020 and August 2021, the latter of which included new left and right roll bar assemblies. A folder of previous MoT certificates is included for every year since 2012, showing a trace of its mileage readings to confirm that—remarkably—the F50 has rarely exceeded 100 miles in a year for 10 years. Its current odometer reading is just 21,294 miles.

Offered in the classic Ferrari colour combination of Rosso Corsa over a Black leather interior, the F50 is instantly attractive with its 18-inch magnesium alloy wheels by Speedline covered by Michelin Pilot Sport tyres. The car is presented with its original books including a Maintenance Certificate booklet with service stamps, Owner’s Manual and other official printed literature while also included are two black leather tool kits, plus wheel centre-lock removal tool stored in zipped leather pouch.

As an incredibly desirable remnant of Ferrari’s commitment to uncompromising and pure “driver’s cars” from the 1990s—made even rarer by the unique configuration in right-hand drive—this F50 is sure to appeal to any enthusiast seeking their next high-octane adrenaline boost.