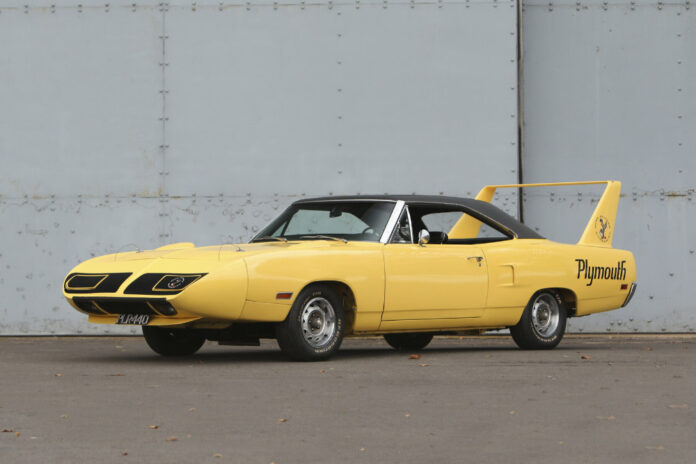 A rare 1970 Plymouth Superbird Roadrunner, believed to be one of only four in the UK, will star at Bonhams MPH December Sale on 16 December at Bicester Heritage, which rounds off Bonhams’ 2021 motoring calendar. It has an estimate of £90,000 – 110,000.

Fewer than 2000 Superbirds were produced to meet homologation requirements for racing and of these, only 300 were powered by the 426cu/7.0-litre Hemi engine of this example and were capable of top speeds of more than 200mph. Production was limited to one year due to the increasing emissions regulations, combined with higher insurance premiums for high performance cars.

Another motorsport inspired model was Mitsubishi’s Lancer ‘Evo’ series, derived from the firm’s rally programme, which was successfully produced in 10 versions. The 1997 Evo IV Sports Saloon offered was first owned by Mitsubishi Ralliart Europe, the firm’s UK motorsport division and was used as a company car by a former World Rally Champion and one of Britain’s most successful rally drivers, the late Richard Burns.

The Evo IV was also used by Richard Burns’ co-driver Robert Reid, who has authenticated the car, who kept it until the pair left Mitsubishi in 1998. In more recent years, the car has had its engine and running gear built and a full re-spray, with a total of £28,000 spent over the years. It is offered with its original registration number ‘P66 MRE’ (Mitsubishi Ralliart Europe) and has an estimate of £50,000 – 60,000.

The Bonhams MPH December Sale will be staged on Saturday 11 December from 1pm as a live and online drive-through auction, held in The Hangar at Bicester Heritage. Bids will be accepted in the sale room as well as online, telephone and absentee bids.

All lots will be available to view onsite on Friday 10 December and Saturday 11 from 9am to 6pm. In addition, live and interactive video condition reports and enhanced online ‘walk around video’ preview content will be made available to bidders.

By: Bonhams | Photos Courtesy of: Bonhmas