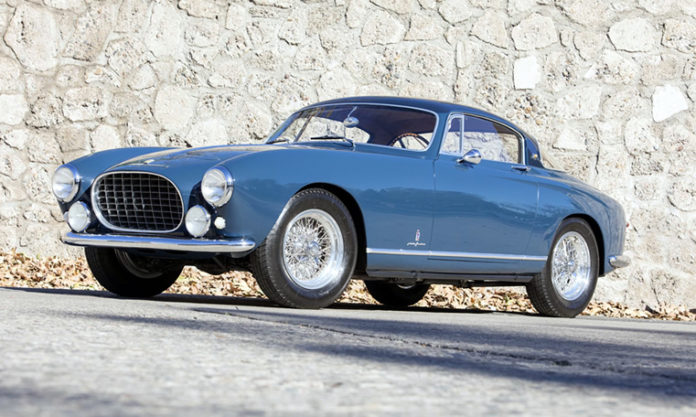 1955 Ferrari 250 Europa GT Alloy: Capitalizing on the raving success of his V12-engined competition cars, Enzo Ferrari began to develop exclusive road-going models for sale to private customers. Mr. Ferrari had begun planning his new car during the war and in 1946 commissioned Gioacchino Colombo to design a small-capacity V12 engine for it. By the time the doors to the 1953 Paris Auto Salon opened, it marked a new dawn for Ferrari. The Ferrari range of road-going cars was being fully renewed with two new models announced, the 250 Europa to replace the 212 Inter born in 1951 and a bigger-engined model, the 375 America. 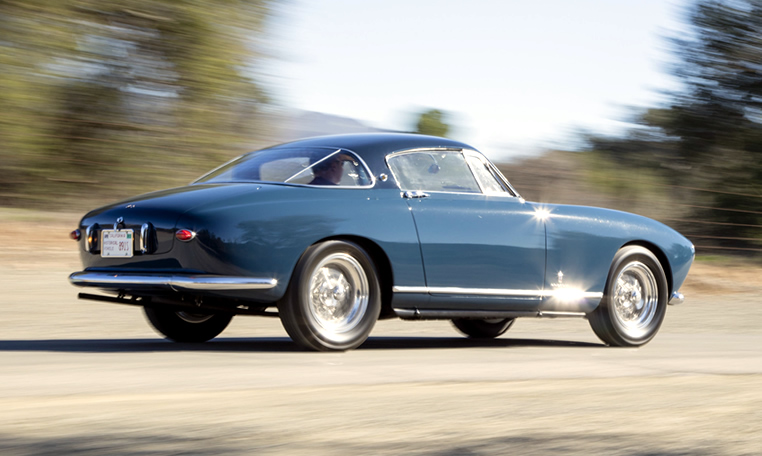 The 250 was Ferrari’s first true Gran Turismo, and it was dressed in the Pinin Farina design that would come to be synonymous with how a Ferrari looked, forever intertwining the 250 with the passionate men of Maranello and Turin. The sobriety of shape and refined elegance of line exuded by the Europa were fully confirmed over and over again by Pinin Farina in later Ferrari GTs, and design cues created by the Ferrari-Pinin Farina partnership during this time, like the long, low hood and oval radiator, continue to appear on Ferrari models of the present day. It was this design that has, for decades, embodied the spirit of cruising through the French Riviera, cocooning occupants and luggage in luxury while effortlessly eating up miles. 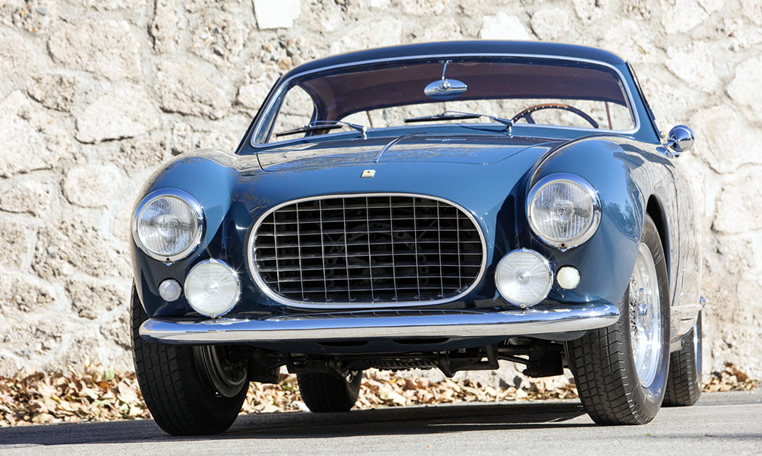 First seen at the Paris Auto Salon the following year, in 1954, the new second series Europa GT looked quite similar to the standard Europa, but in reality, the GT was a car with a wealth of new features. The original Colombo-designed short block engine had been brought up to 220bhp at a screaming 7,000rpm through its development in the competition-derived 250 model, the 250 Mille Miglia. Used in the new Europa GT’s, it allowed for a shorter wheelbase. This in turn brought down the weight by approximately 10%, and nearly ten miles per hour was added to the top speed of the new Europa GT Coupe. 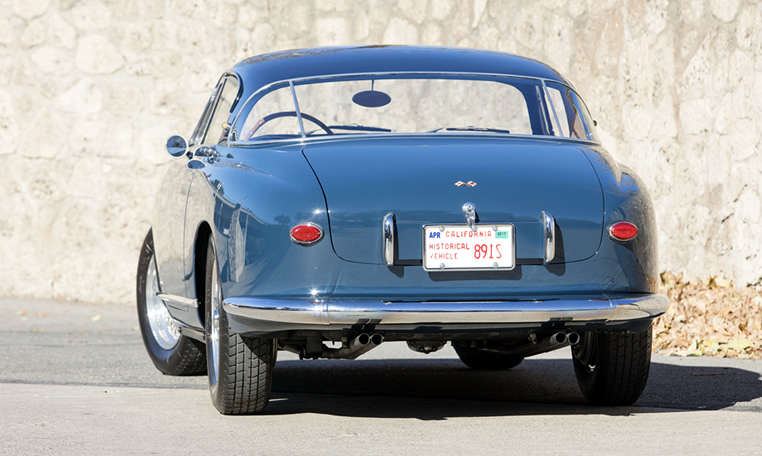 Perhaps the most desirable upgrade to the Europa GT was the fully revised suspension of the GT, now featuring independent coil-sprung suspension with double wishbones up front, yet only fitted to the late production cars. This made for a much better handling car, with excellent road holding, cornering abilities and ride quality. Less than 15 of the Europa GT’s featured this advanced suspension system. The huge Alfin brake drums were similar to the ones later fitted to Ferrari’s competition GT, the Tour de France, and offered very capable stopping power.

As one of just two Europa GT examples bodied with lightweight aluminum alloy coachwork, chassis no. 0389 GT claims an unusual degree of rarity. Also prepared with competition specifications generally unseen in the model, this car has been associated with some of the most respected names in the Ferrari niche. 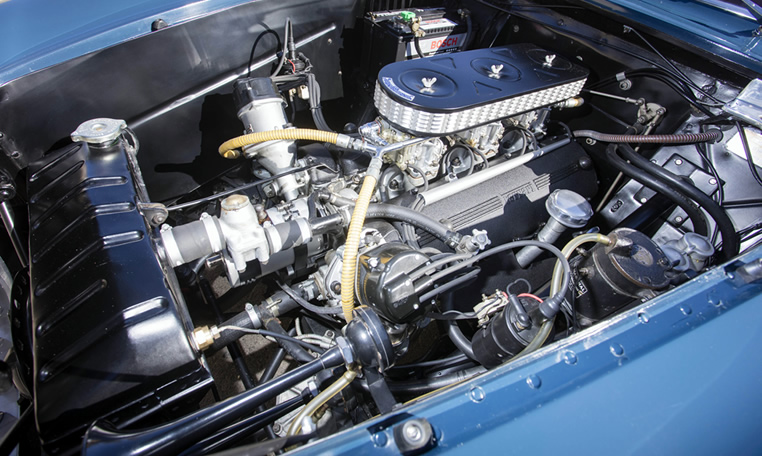 According to a note typewritten on 0389 GT’s factory build sheets; “Per MM/55”, the car was originally prepared for the Mille Miglia, but it ultimately never ran the race, as it was not completed at Ferrari’s workshops in time for the start. The unusual build specifications combined elements of two different chassis types, the Type 508, which was the first of the ever-evolving 250 GT chassis, and the Type 513, which was only otherwise used on four 250 GT Speciale examples that were bodied in Super America-style coachwork. The chassis frame tubes and cross members of 0389 GT were laid out quite differently compared to the standard Europa GT chassis, and features a wider track front and rear, providing the car superior handling for road racing. The brakes fitted to 0389 GT were identical to the ones fitted to the 375 MM Spider and Berlinetta sports racing cars, offering the best available stopping power for the already light GT. The Type 112 motor no. 0389 GT (internal no. 333) was installed and tuned for competition, weight being kept to a minimum using a Type 102 magnesium gearbox casing, again similar to the componentry fitted on the 375 MM. The beautiful lightweight body was executed to the builder’s handsome Europa GT Coupe design, and was configured with left hand drive steering, featuring an adjustable steering column. Clearly, 0389 GT was built for a specific purpose and was a very special automobile from its inception, even by Ferrari standards. 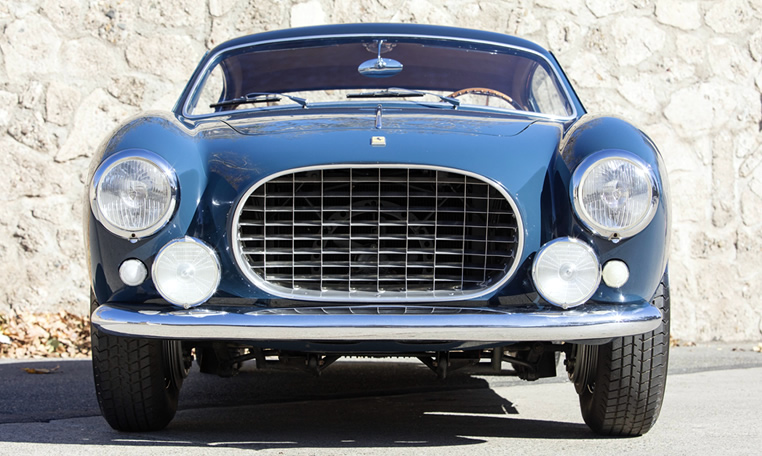 Finished in Blu Fiat 8V and upholstered with Plastico Naturale, much as it appears today, 0389 GT was issued a certificate of origin on March 18, 1955, and on April 27 the car was officially sold to the Industrie Lampade Elettriche in Vicenza, Italy, on behalf of Luciano Cascalli. The car remained in the Rome area over the next few years before being purchased by the well-known Ferrari collector Edwin Niles of Los Angeles, California, in March 1960. Mr. Niles imported the car to the United States, and soon thereafter sold it to a local Los Angeles dentist named Robert H. Peterson, who retained the legendary Max Balchowsky (builder of the famed Old Yeller road-race specials) to install a Corvette transmission and rear axle after a clutch failure, though the original Ferrari V12 engine was retained. 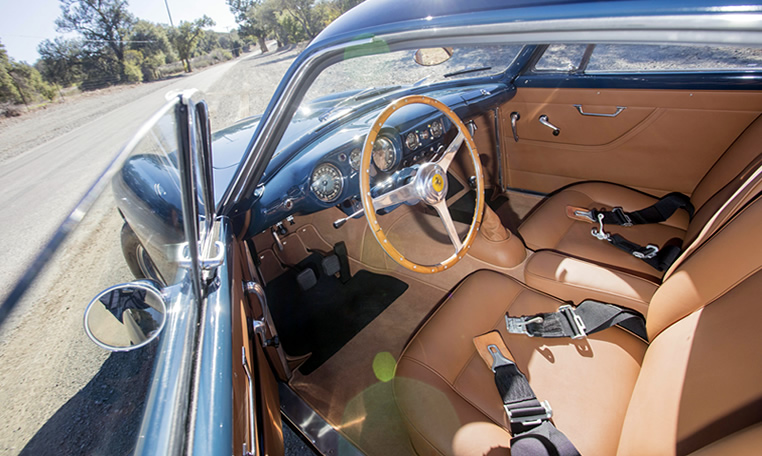 The Europa GT then passed to several Hollywood executives, including two different employees of Columbia Pictures, eventually landing in the purview of Malibu-based Ferrari collector Paul Forbes in 1981. A year later, the alloy-bodied Europa GT was purchased by marque specialist Steve Tillack of Redondo Beach, California, and he treated it to a cosmetic refurbishment in the correct color scheme of blue paint over a tan interior. 0389 GT was then sold to Italian resident Marco Ferre, who repatriated the beautiful car back to its native Italy. Following Mr. Ferre’s passing in 1991, the 250 GT was inherited by his children, and soon offered for sale 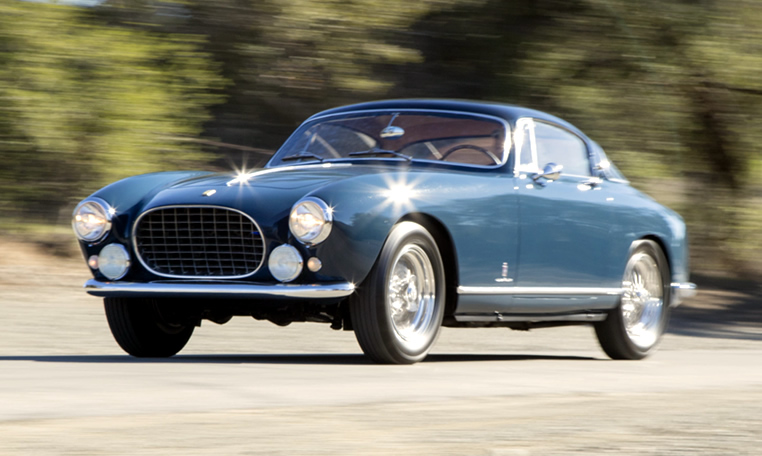 Acquired then by Michael Stollfuss of Bonn, Germany, the Ferrari was finally campaigned at the Mille Miglia (albeit the Storica) in May 1999 wearing start number 298, some 44 years after it was originally intended to contest the Italian epic. After brief ownership by one additional German enthusiast, the car returned to the United States when purchased by Fantasy Junction’s Bruce Trenery, and quickly found a willing buyer in Stephen Block of Moraga, California. Mr. Block unofficially brought the Europa GT to several major events without formally exhibiting it, including the Pebble Beach Concours d’Elegance and Concorso Italiano, and also ran the car in the 2002 California Mille, where 0389 GT’s front fender was ligtly damaged. Hereafter, 0389 GT was repaired and treated to a proper repaint in 2002 by award winning painter Brian Hoyt and his esteemed shop Perfect Reflections. During this time, the car’s matching-numbers Colombo V12 engine was rebuilt by Ferrari specialist Patrick Ottis. The car then passed to renowned Southern California collector Barry Konier, before being purchased in 2008 by the consignors, two of the most established vintage Ferrari collectors in the United States. 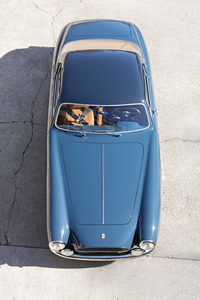 With its rare factory competition specifications and desirable Pinin Farina aluminum bodywork, 0389 GT is ideally suited for vintage touring, and in addition to the California Mille the car has successfully completed the Colorado Grand four times. The sensational Ferrari received a Platinum Award at the FCA’s May 2013 meet in Pasadena, and is accompanied by an owner’s manual and parts book, a toolkit in a proper leather roll, Marcel Massini’s history report, and most importantly copies of the original factory build sheets. 0389 GT’s original matching numbers engine block is currently fitted with cylinder heads from a Colombo Type 128C engine, offering improved performance and serviceability. For the Ferrari purist that wishes to more authentically prepare the car, a set of Type 112 cylinder heads with individual intake ports and correct intake manifolds is included, and they claim the added superlative of having been rebuilt by renowned engine builder Bob Wallace. The Corvette transmission and rear axle installed by Max Balchowsky are long gone, and in place are correct, period Europa GT units.

Featuring rare mechanical specifications, this Europa GT is one of approximately 27 examples bodied with Pinin Farina’s exquisite Coupe coachwork, and one of just two such cars built in lightweight aluminum alloy. Beautifully presented in two-tone blue, with the bottom color matching car’s originally applied Blu Fiat 8V, this stunning Europa looks extremely smart. The interior is correctly trimmed in neatly contrasting caramel-colored leather, and carpeting and trim throughout is correct for the model. Original specification Marchal lights adorn the fenders, and the correct Borrani wire wheels are fitted with period-correct, tall Michelin tires. 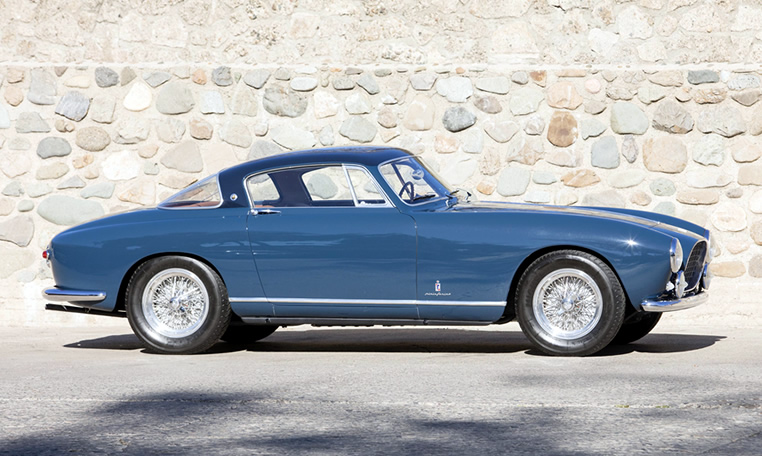 0389 GT is that rare competition-prepared Ferrari GT that was never raced or damaged in period, a car that is equally well suited for vintage touring or display on the finest Concours lawns. It is, without exaggeration, the ultimate performing example of the handsome Europa GT, having been originally intended for the 1955 Mille Miglia, subsequently restored and maintained to breathtaking condition, documented with original factory paperwork, and tended by some of the finest Ferrari craftsmen in the United States. It begs serious consideration by any dedicated collector of vintage Maranello automobiles, and would be the ideal machine, with its epic performance and spacious, comfortable cabin, to enter in the Mille Miglia Storica once more, or any other driving event such as the Copperstate 1000, California Mille or Colorado Grand.

By: Bonhams | Photos Courtesy of Bonhams