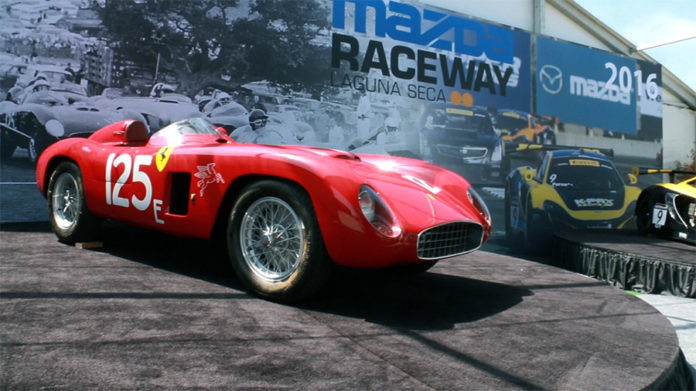 During the month of August, the Monterey peninsula is transformed into an automotive festival. Many events over many days ensure that there is more to see and do than time available. Some events feature static displays of the rare, the pristine and the historically significant. The main event for those that prefer their automotive sculpture in action takes place at Mazda Raceway Laguna Seca in the form of the Rolex Monterey Motorsports Reunion.

The Rolex Reunion is a highlight at Laguna Seca every year and one of the world’s most prominent vintage racing events. Various classes feature everything from pre-war racers to the cars of the 1950s and 1960s that cemented the broad appeal of weekend warrior racing to full bore prototypes that took professional racing drivers to the top steps of podiums in the world’s biggest sportscar races. 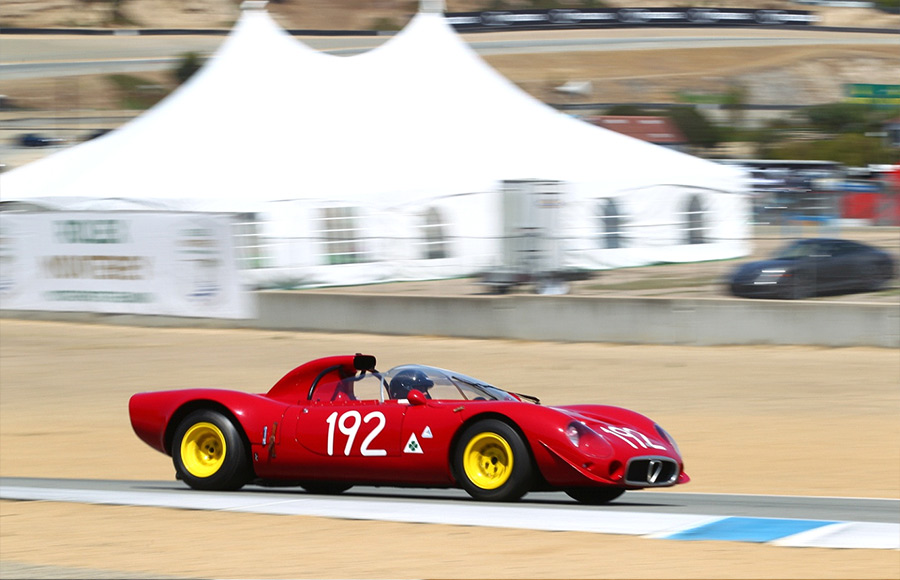 Naturally, The Speed Journal is drawn to the lure of the race track and principal Jeff Francis was pleased to have the opportunity to pilot a 1962 Jaguar E-type owned and restored by Larry Oka. It raced at Laguna Seca and won races in 1963 and 1964. It was built by Joe Huffaker for Kjelle Qvale who was the west coast importer for Jaguar cars. Situated in a race group with other high horsepower cars of the mid-1960s, the Jaguar shared the track with cars bearing the badges of Corvette, Cobra, Shelby, Porsche, and Ferrari among others. The Jaguar boasts 285 horsepower from its inline six-cylinder engine which was needed to tend with the competition in the class. 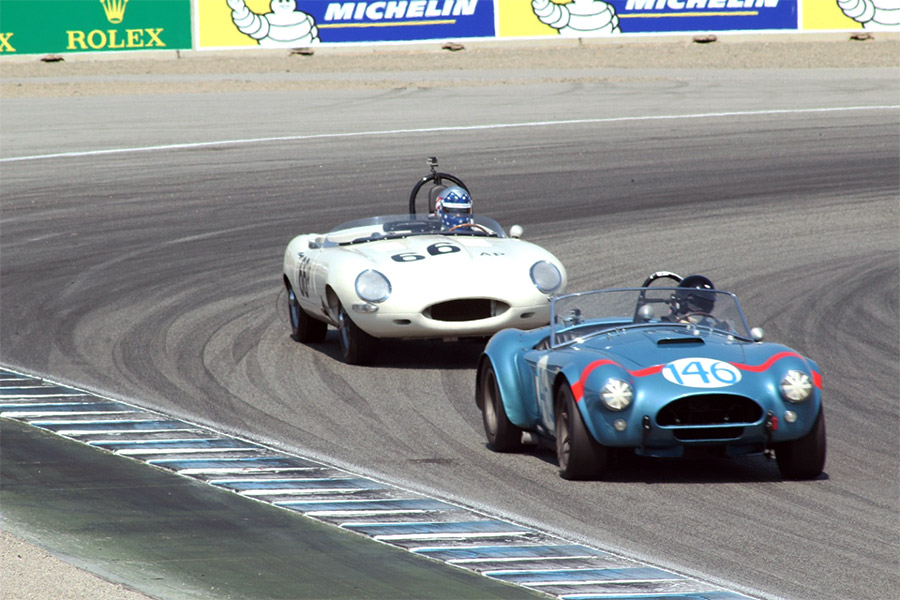 Each year, the paddock at the Rolex Reunion is a timeline treat. A stroll through the rows of cars and trailers is a walk through time. When cars from different eras are parked side by side, the progression of aerodynamics, tire technology and engine location is easy to spot. 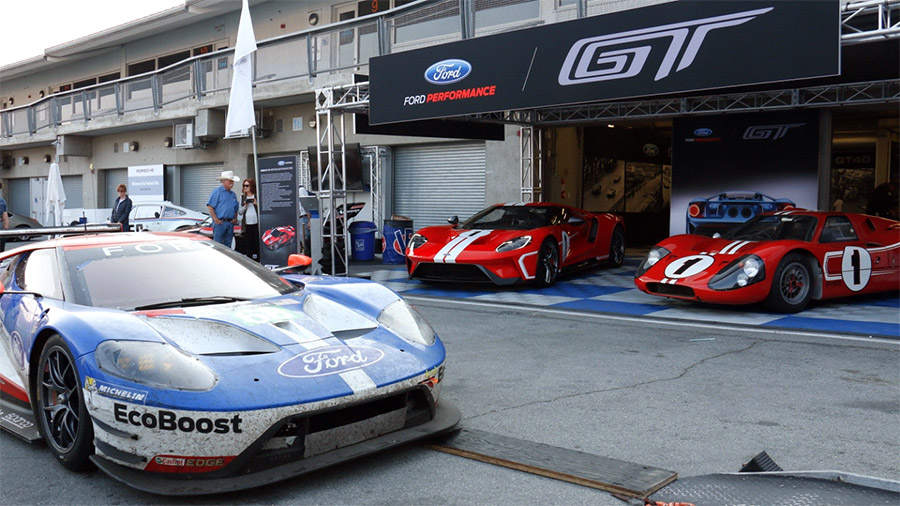 To add to the education, a walk inside a tent titled “Racing through the Decades” featured displays of a dozen historically significant cars that had some connection to Laguna Seca. The track itself is celebrating 60 years of racing in 2017, so the event provided a great reason to gather some great race cars. Among those on display was the 1956 Ferrari 500 Testa Rossa that won the first event in 1957 and the 2016 McLaren 650S GT3 that won the most recent Pirelli World Challenge race in October 2016. Ten other cars completed the chapters of history in between. 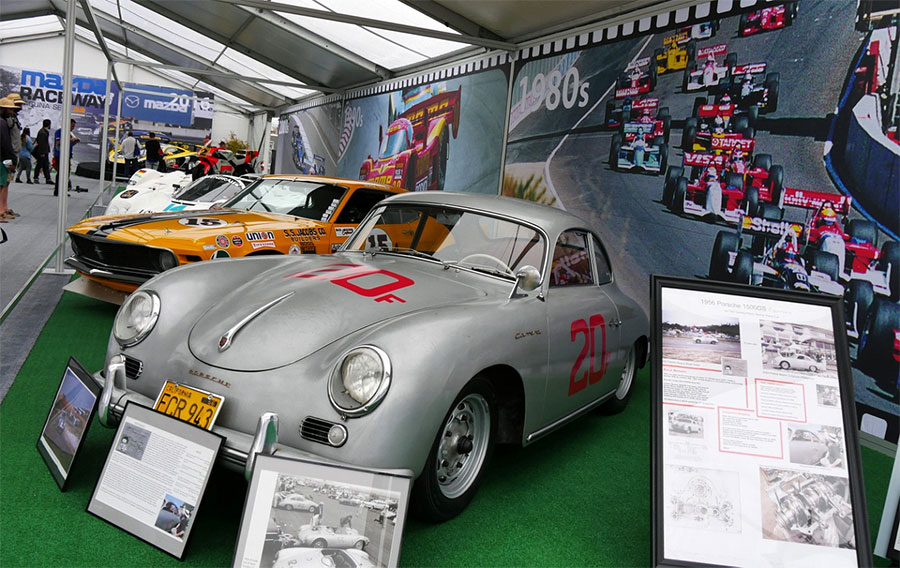 The Rolex Reunion is popular enough that it attracts over 900 entries for only 550 available grid slots. Paddock space and track length are the constraints, but the effect is a curated event with great diversity of marques and drivers. The organizers look at the authenticity of the car and historical correctness. While safety requirements must be met, the cars on the track should look like they raced in period. 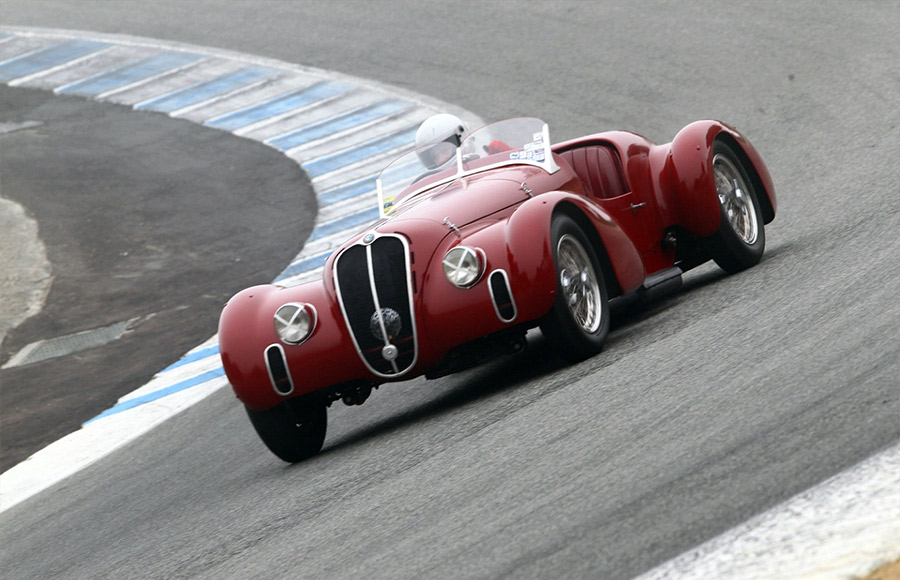 Driving a vintage race car is an exercise in resetting your expectations. Memories of modern tires, brakes and transmissions get set aside as the driver becomes immersed in the challenges of an older race car. Skinny tires and questionable brakes make each corner an event on its own as the car is coaxed with a gentle slide. 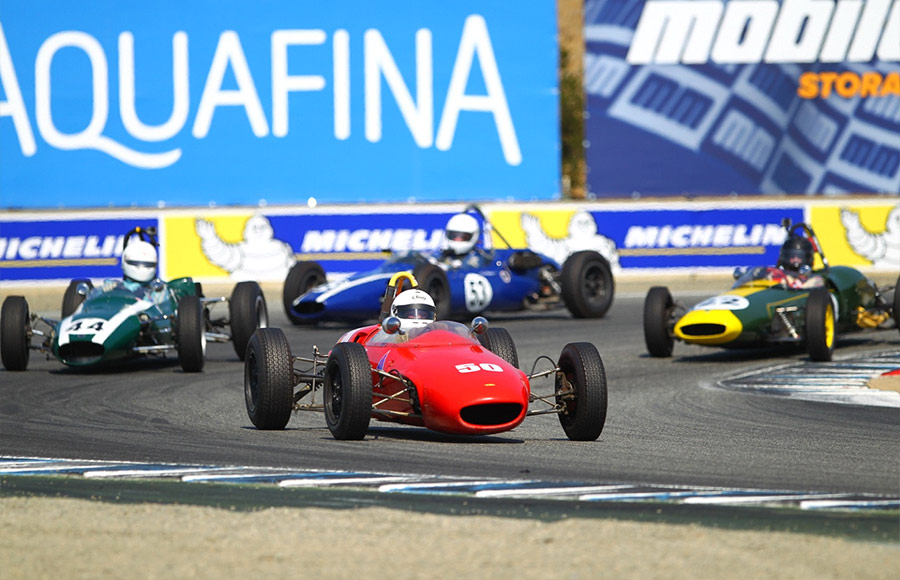 The challenges provide the rewards though. Each car has its own personality and quirks and the ability to run a vintage car at racing speed on a track where it made history over five decades earlier is truly unique. Spectators not only get to witness drivers wrestling cars sideways through the twists and dice with the competition, but they also get a brief glimpse of what the racing must have looked like before the cars became worth six and seven figures.

Such a prominent event brings interesting cars out of private collections and also manufacturer interest from those that wish to directly connect modern product to their heritage namesakes on the track. Marques like Alfa Romeo, Jaguar, Mazda, Audi, Porsche, and Ford put current production and race cars on display for all to see. Even Acura had its brand new NSX road car and race car versions on display, proving that the event has drawing power for their target market. 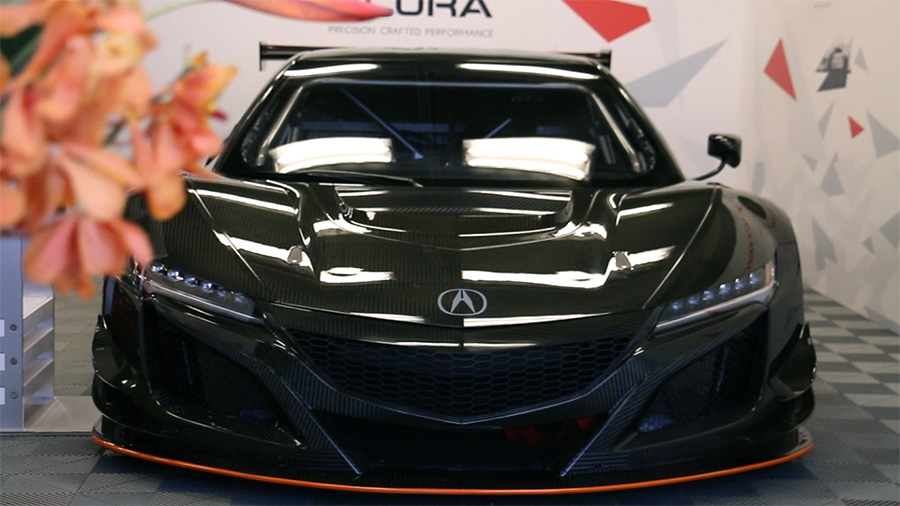 The event isn’t all about sheetmetal though. The Rolex Reunion doesn’t merely allow like-minded vintage racing enthusiasts to get together every year, it also often reunites cars together with the original drivers or others involved with racing the cars in their prime. A great example was the opportunity to see John Morton back in the BRE Datsun 240Z, a car he drove to national championships in 1970 and 1971. The car’s final assembly and restoration was literally completed only days before the Rolex Reunion – just in time to get it to the track and allow John to drive it in anger on Saturday. The car did well against very robust competition but the real joy was the ability to give the car and its original driver another opportunity to run together. 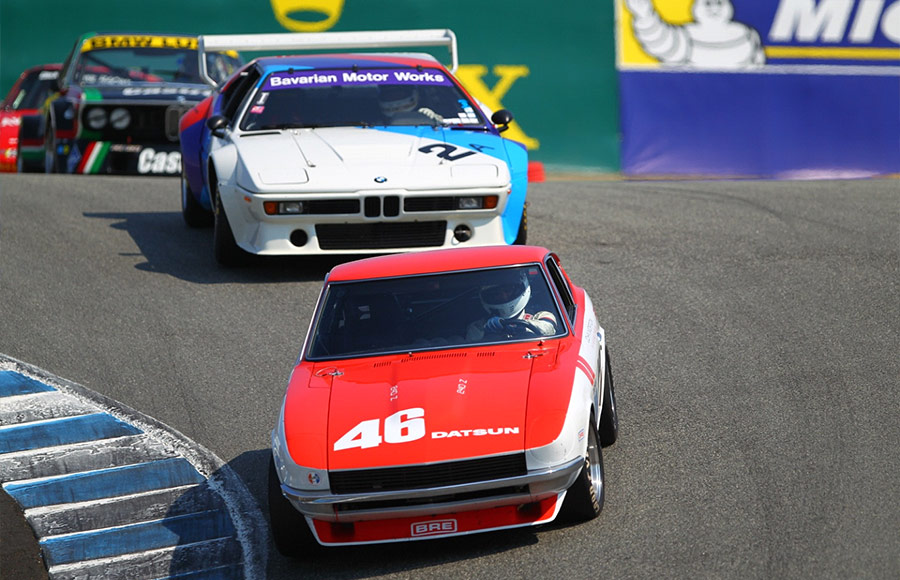 The Rolex Monterey Motorsports Reunion has dozens of these stories. Each car has its own compelling history and often much of that history came in the preservation, restoration and efforts to honor the original racing purpose of the car. Those that have visited the event know why it qualifies as a bucket list item. Those that have yet to attend should move it up a few spots in priority on their bucket list. 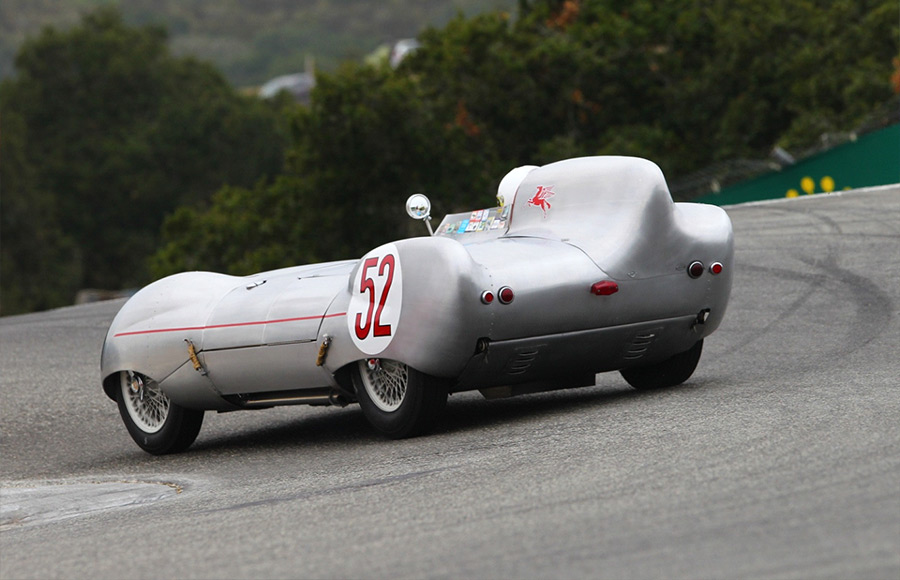 The Speed Journal would like to thank Mazda Raceway Laguna Seca, SCRAMP, Larry Oka, and the others that made our weekend a memorable experience.