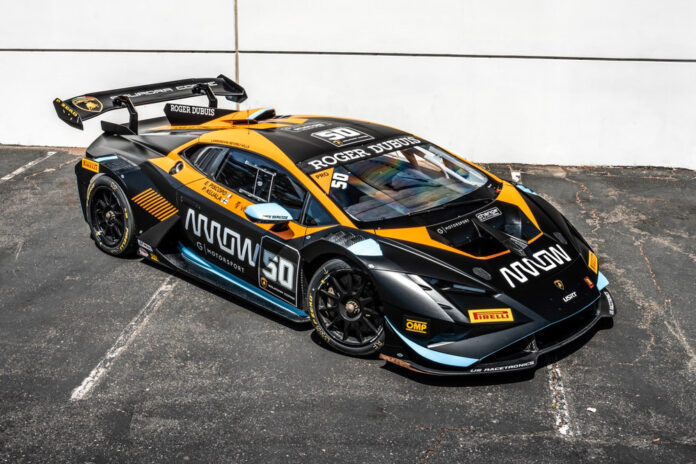 Luxury Automotive group, O’Gara Coach based in Beverly Hills CA, have announced their entry in the prestigious Lamborghini Super Trofeo North America Series for 2022 in partnership with Arrow Electronics, after a seven-year hiatus.

Leading their charge in the Pro category will be O’Gara COO, accomplished race driver and former Lamborghini World Champion, Edoardo Piscopo (ITA) who was a part of the team’s last challenge in 2015 when they celebrated winning both driver and team championships. Edoardo commented “After taking a few years off from racing, I am thrilled to be back in a series which has given me so much personally and professionally. O’Gara Motorsport is a pillar of our O’Gara brand, with many more exciting endeavors to come. Thank you, Shane Seneviratne, for once again putting together such a special group of stakeholders”. Edoardo will be sharing duties with Patrick Kujala (FIN), also a former Pro World Champion.

Tom O’Gara, Owner of O’Gara Coach also shared his excitement in returning to the series “I’m really excited to be partnering with Eddie Littlefield and bringing our two race teams together. But the most exciting part is having Arrow Electronics join Lamborghini Super Trofeo. For Arrow Electronics, a world-class technology company that’s involved in racing at all levels including Formula One and IndyCar, to join us is a real honor.”

This will be Arrow Electronics’ first foray into GT car racing having had success in both Formula 1 and IndyCar with McLaren. Mike Long, Chairman, President and CEO of Arrow Electronics added “Arrow is pleased to be joining US RaceTronics in the IMSA paddocks this year. We look forward to many wins and expanding our customer relationships.” The team will be run by the O’Gara Motorsport division in partnership with Change Racing and operated by US RaceTronics.