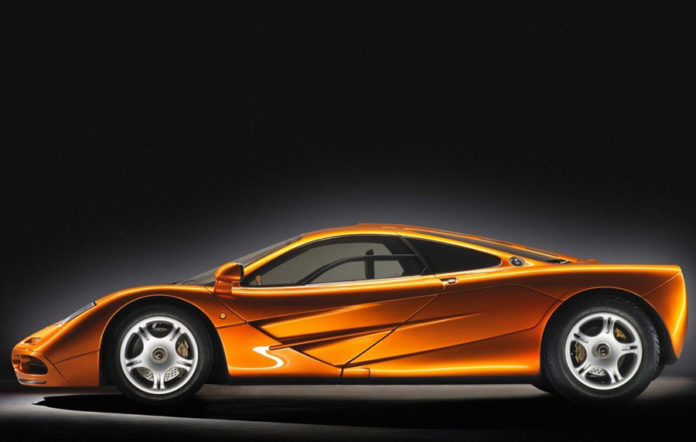 The 1992 McLaren F1 was something that world had never seen before. And, until Gordon Murray delivered the new T.50 it’s something we never expected to see again. It was a car made completely without compromise, perhaps why it is now one of the most sought-after cars in the world.

The F1 story began when Murray’s flight back from the 1988 Italian Grand Prix was delayed. He sketched his first ideas for a high-performance three-seater and persuaded Ron Dennis and the management at the time to build the finest road car yet created.

From its world-first carbon fibre tub chassis, which took 3,000 man-hours to make, to its titanium subframe and magnesium alloy wheels, the F1 was designed to be as light as possible. Even the toolkit was titanium, to save weight.

Its bespoke 620bhp 6.1-litre V12 engine was developed by Paul Rosche and his team at BMW Motorsport. It had the highest specific output of its day to give the F1 a top speed of over 230mph. Such was the heat output from this mighty motor that McLaren lined the engine bay with the best heat-reflective material available: pure gold.

The F1 was sculpted by designer Peter Stevens to cleave through the air and yet remain stable at any speed without the need for ungainly wings, with the airbrake only popping up when necessary. Its unique one-plus-two seating arrangement put the driver centre stage, while still giving passengers sufficient space.

With a manual gearbox, unassisted steering and brakes, and a naturally aspirated engine it offered the most pure, undiluted driving experience.

On-board diagnostics transferred data to the factory so every single one of the 64 road cars made could be monitored for performance. If a customer had a problem McLaren would fly out a technician to fix it. Or there were eight official service centres worldwide.

Money was no object when the car was developed and, despite the F1 costing £540,000 new, McLaren didn’t profit from the road car programme. But owners certainly did.

For those willing to play the long game, seldom has a car proved to be such a wise investment. According to the Hagerty Price Guide, until 2006 F1s were changing hands for just over the original asking price, but by 2008 prices had trebled and the F1 wasvalued at £1.5 million.

Since then there’s been a seemingly exponential rise in values. By 2014 you’d need over £5 million to get behind the wheel. A year later Rowan Atkinson sold his F1 for £8 million, despite crashing it twice and making possibly the world’s biggest insurance claim.

Even that looks like a bargain today. In 2017 chassis no. 44 sold at Bonham’s Quail Lodge Auction for $15.6 million (£12.1 million at the time), while the Hagerty Price Guide now values the cars at in excess of £16 million.

It’s hard to imagine any other investment of any kind offering such an amazing return over 20 years, let alone one that could offer as many thrills to its owner. And now the world will have to wait and see if Murray is able to repeat the party trick all over again, and create both the greatest driver’s car available, in the guise of the new T.50, and one of the most rewarding investment devices money can buy.

In addition to providing globally leading insurance products, Hagerty International is regarded as one of the world leaders in classic car market analysis and the valuation of classic cars. Regular market reports are published by Hagerty taking data from owners, collectors, car sales and auctions from around the world to give an accurate overview of the classic car market, its stability and value.

Hagerty also offers an extensive event program, including the famous Festival of the Unexceptional, and remains one of the world’s largest classic car content providers through its print, film, digital and social media channels.

Will rely on Franchitti’s racing experience to help with setting up of track events for T.50s customers
Read more
Automotive News

One of Murray’s core philosophies is weight-to-power, not power-to-weight.
Read more