Aftermarket also expected to support the Navi with special components 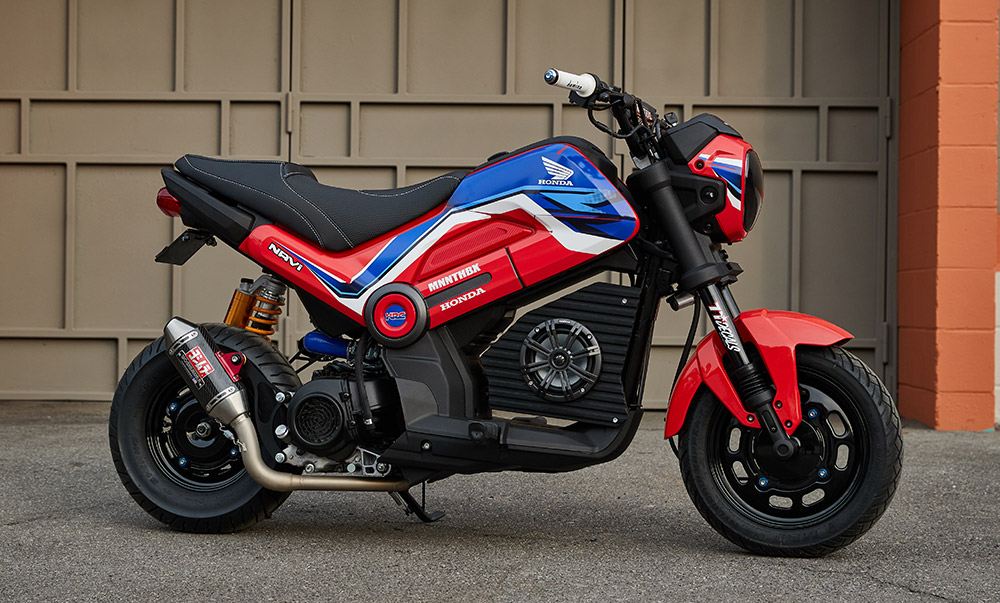 Just days after American Honda confirmed the availability of the Navi miniMOTO to U.S. customers for the 2022 model year, a pair of aftermarket partners showed off custom Navi builds during the model’s media ride event at Westside Museum in Southern California. After being given early access to the Navi, noted miniMOTO cultural trendsetters MNNTHBX and Steady Garage each put in long hours in order to complete their projects in time to display during this weekend’s IMS Outdoors motorcycle show at OC Fair & Event Center.

Since its Tuesday announcement, the Navi has earned headlines as a great choice for new riders, thanks to its affordability ($1,807 MSRP!), approachability (automatic transmission) and fun styling. That said, customization is always a priority for many miniMOTO customers, and the MNNTHBX and Steady Garage projects show what is possible with a vivid imagination and skillful execution.

MNNTHBX
It’s hard to find anyone with their fingers more squarely on the pulse of the miniMOTO community than MNNTHBX co-owners Kevin Estep and Greg Hatcher, who are also the organizers of Barber Small Bore, an annual miniMOTO mecca at Barber Motorsports Park in Birmingham, Alabama. Upon receiving the Navi at their Seymour, Tennessee, workshop, Estep and Hatcher immediately pegged it as being perfectly suited for a racetrack pit bike, so they went with a sporty design. “We were really inspired by the bike’s utility, and how we could take that and make it cool,” Estep said. “We’ve done a lot with bikes that are carbureted and have CVT transmissions, so that was in our wheelhouse. It’s sort of a blend of a Grom and a Ruckus, both of which we have a lot of experience with.”

The bodywork was covered in racy red, white and blue graphics, an Öhlins shock was fitted via a billet-aluminum mount, and a Renthal low-positioned MX-style handlebar was clamped in place, as was a Yoshimura carbon-fiber exhaust. The Navi comes with 12- and 10-inch front and rear wheels, so to give it a road-race-style balanced effect, MNNTHBX sourced the largest rear tire they could fit. While that and the colors make for a sport bike look, the project’s highlight is arguably its full sound system, including two 6.5 inch Kicker speakers between the rider’s legs, along with an amp and a controller integrated into the panel in front of the bike’s seat. “The Navi already comes with a storage compartment, so we thought about how we could repurpose that,” Estep explained. “We figured if you’re in the paddock, you always want some tunes, so we built a billet enclosure to go in that same space and integrated a Kicker sound system. It sounds really good!”

STEADY GARAGE
Located just 40 minutes north of the IMS Outdoors show in Irwindale, California, Steady Garage has birthed four previous special Honda projects, but the Navi was something different for partners Kevin Dunn, Jimmy Chen, Bhwe Suh and Duy Nguyen. “It was a brand-new bike for us, so we had to do a lot of research and trial and error,” Dunn said. “A lot of the inspiration was from the Ruckus and the Grom, so we modified some of our existing parts for those models in order to work with the Navi. The style we went with is similar to what we call ‘street Grom’ – low stance and a wide front wheel.”

Out back, Steady Garage barely managed to fit a rear wheel that’s both wider and has a larger diameter, a choice that necessitated sourcing a low-profile tire. Vance & Hines contributed a unique custom exhaust with stainless-steel flex pipe and twin outlet tips. The shock is a high-end unit custom-built by Taiwanese company Gears Racing, and the bike’s overall styling is super-clean. “We gave it what we call a diamond tail, which is also common with the Ruckus, and that really cleaned up the rear end,” Dunn said. “Then we custom-built a carbon-fiber seat off of the stock seat pan, following the lines of the diamond tail.”

Like MNNTHBX, Steady Garage opted to retain the Navi’s signature storage area, though they did trim the pod down for a narrower profile; the box can also be removed and replaced with a handy molle panel. The bodywork is all custom-painted, and it’s all highlighted by what Dunn admits was a relatively last-minute addition: “illuminated pinstriping” achieved via LED strips that change colors, giving the effect of a rolling neon sign.

REAL-WORLD CUSTOMIZATION OPTIONS
For Navi owners interested doing their own customization, both MNNTHBX and Steady Garage will offer several of the components used in their Navi projects, and Vance & Hines has developed a tapered exhaust system for the bike. In addition, Honda Signature Accessories is offering special graphics kits that were developed in a pair of collaborations – one a vibrant, colorful version designed by edgy Portland gear manufacturer Icon and the other a Viper Urban Camo version designed by South Carolina hunting-apparel company TrueTimber.

Attendees at this weekend’s IMS Outdoors show can see the custom bikes in person at Honda’s booth. New riders will also have the opportunity to try out the Navi at the show’s Ride With Us Moto Intro program, organized by the Motorcycle Industry Council.