Trans-Am Legends to be Celebrated at WeatherTech Raceway Laguna Seca 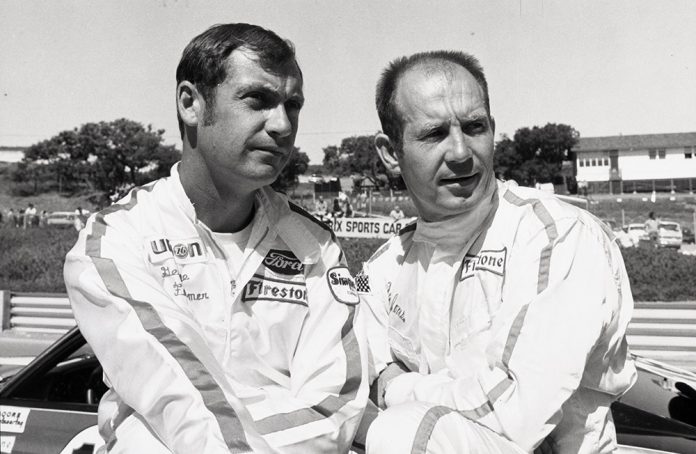 George Follmer and Parnelli Jones will share the track once again.

Two of the most competitive drivers during the formative years of the Trans-Am series, Follmer and Jones will be reunited as co-Grand Marshals at the Rolex Monterey Motorsports Reunion, Aug. 12-15 at WeatherTech Raceway Laguna Seca.

The pair are scheduled to be honored guests Saturday, Aug. 14 – which includes taking part in the Picnic in the Paddock, where they will participate in a Q&A session with race fans – as well as taking a few honorary laps around the track.

As Ford in Trans-Am celebrates its 55th anniversary, Follmer and Jones are the perfect featured duo. They competed head-to-head and as teammates in Ford Mustang Boss 302s, fighting for the championship throughout the 1960s and ’70s.

Some of their most heated battles occurred in Monterey. In the 1970 Laguna Seca Trans-Am Championship for Sedans race, Jones took the checkered flag, just edging Mark Donohue and Follmer. However, Follmer would go on to win the 1972 Monterey Castrol GTX Grand Prix Laguna Seca.

“These are two of the most legendary figures in Trans-Am racing, and it’s only fitting that they would join us for this special occasion. Both men had storied careers, including many memories at WeatherTech Raceway Laguna Seca, and we’re looking forward to giving the fans a chance to acknowledge and celebrate them.” – John Narigi, president and general manager of WeatherTech Raceway Laguna Seca

Jones is closely associated with the famous No. 15 Ford Mustang Boss 302. He had numerous wins using the familiar Bud Moore orange Ford in 1970, en route to capturing the Trans-Am championship that year. Jones won the 1963 Indianapolis 500 as a driver, and then won it twice as an owner, in 1970-71, with driver Al Unser. He retired with six IndyCar wins and four wins in 34 NASCAR starts, and is inducted into more than 20 Halls of Fame.

Full ticket packages for the Rolex Monterey Motorsports Reunion, from single day tickets to comprehensive VIP experiences, are available online at WeatherTechRaceway.com or by calling WeatherTech Raceway Laguna Seca’s guest relations associates at (831) 242-8200. For added visitor convenience, the Laguna Seca Recreation Area campground has some campsites remaining. Tickets for the event can be found here.