The Bronco is Back with ‘Built Wild’ 4X4 Adventure Vehicles & Schools 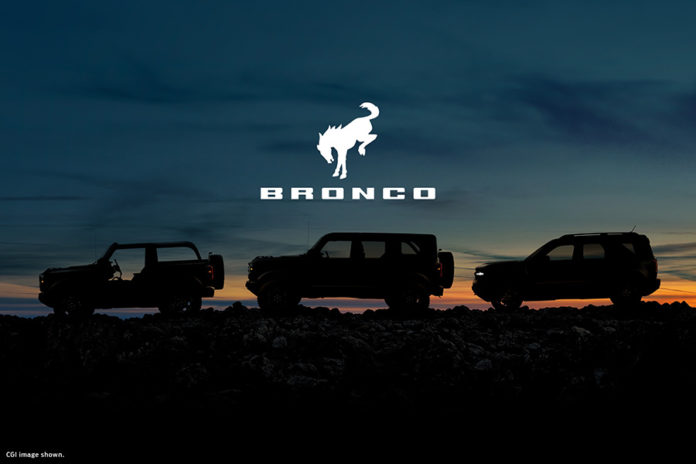 Bronco is back! Ford is introducing an all-new Bronco brand featuring a new family of Built Wild™ SUVs, U.S. off-road driving schools and a unique community for owner and enthusiast engagement.

The all-new Bronco brand includes a Bronco two-door, first-ever Bronco four-door model and all-new rugged, small SUV, the Bronco Sport – and will be the only domestic brand of SUVs with standard 4×4. Ford is revealing the all-new models July 13 at 8:00 p.m. EDT across Disney network channels National Geographic, ESPN and ABC – as the Bronco reservation system opens.

Every Bronco model is engineered to deliver thrilling and confident off-road experiences that build on the original 1966 Bronco DNA and racing heritage, with ingenious new updatable technologies and adventure-ready attributes created with today’s outdoor enthusiasts in mind.

“Bronco gave rise to the fun and versatile off-road SUV in 1966, becoming the first enjoyable sport utility vehicle for those who wanted to live, work and play outdoors,” said Jim Farley, Ford chief operating officer. “Like the original, the all-new Bronco family is engineered to take you to epic places, with capability to deliver confidence on any type of terrain.”

Chief among those authentic experiences are Bronco Off-Roadeos – four off-roading and outdoor adventure playgrounds built for all skill levels, with experiences designed to build confidence and inspire Bronco owners to get out in the wild for years to come. They start opening next year.

Also connecting current and future Bronco owners as well as off-road fans and outdoor enthusiasts, Bronco Nation (www.thebronconation.com) – an independent online community that elevates the excitement of owning an all-new Bronco or Bronco Sport. Bronco Nation enables owners and fans to be part of a passionate and knowledgeable off-road, adventure-driven community.

Ford is ramping up all-new Bronco merchandise, too. From Bronco gear to remote control cars, Ford-licensed Bronco merchandise is available at Amazon.com/fordbronco. Enthusiasts can shop for gifts, novelties, collectibles and apparel. A portion of Bronco merchandise proceeds will be donated to the Bronco brand’s stewardship efforts.

Beyond that, the Bronco brand continues building its off-road racing legacy as Official Vehicle of King of the Hammers, ULTRA4 Series. Bronco also is the official SUV of SCORE-International – one of many events key for proving out the vehicle’s capability and connecting with Bronco brand influencers.

McLaren and Customers Mark 10 Years of High-Performance at G...