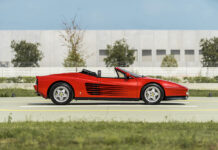 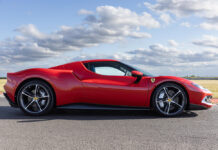 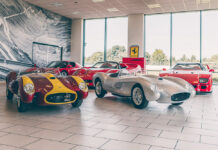 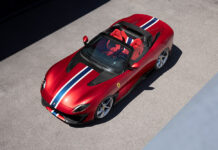 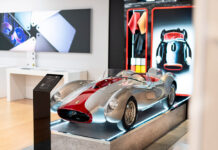 I managed to get some clips of Ferrari’s new track-only weapon during the Club Competizioni GT, a freshly created club for owners of old Ferrari GT race cars and during which owners of the 488 GT Modificata will be able enjoy their new toy. The ‘Modificata’ was born with the idea of having a car that shared in all aspects the soul and technologies of both the 488 GT3 and GTE race cars but without all those limits imposed by technical and sporting regulations of the GT3 and GTE class for the BoP (Balance of Performance). The resulting machine is able to produce up to 700hp (instead of the typical 600 of the GT3/GTE) thanks to some components modifications made to the engine and the use of more extreme maps. The car will be built in a very limited number of examples which will be fully customizable by their owners.

Ever since it was unveiled, I’ve been trying to figure out if there were any obvious differences between the Modificata and the GT3/GTE but unfortunately on the external look I haven’t found any. To be precise, the 488 GT Modificata shares the exact same body of the 488 GT3 Evo 2020 so it’s technically impossible to distinguish them if they should be simultaneously on the track during the same test day (plus, thanks to the Modificata in this video, you can see it can also feature the additional LEDs lights used for night sessions in endurance racing…).

Of course I focused my attention on its sound in order to spot some differences between the GT3/GTE cars but I must admit it’s very difficult to distinguish them if you do not have a trained ear on the first two. The exhaust sound is very very similar, but due to higher turbo pressure the 488 GT Modificata seems to have an extra ‘blowing air’ note, more typical of the 488 Challenge or 488 road cars. Turbo flutter noise is also slightly louder than 488 GT3/GTE race cars. The thing that I really distinctly noticed is related to gearshifts sound: 488 GT3 typically makes deep ‘explosions’ on upshifts, 488 GTE sometimes makes very loud bangs, while this Modificata has a very clean noise on upshifts. They are very fast but it’s very rare to ear an actual ”pop”, thing that is more evident when releasing the throttle pedal and a loud bang may happen (never heard on GT3/GTE cars).
One last one more thing that might make you recognize the 488 GT Modificata on track is the brutal way it unleashes the power out of slow corners. And the traction control often comes into play.

Luckily this time I was sure it was a Modificata both because some lucky Italian journalists had the opportunity to do some passenger laps during that day (and of course they shared the article or videos on the internet: https://it.motorsport.com/ferrari/new…
or https://www.sportmediaset.mediaset.it… ). But also because this car was already at Monza the days before, during the Ferrari Challenge Europe racing weekend, which was full of media and photographers. A friend of mine was kind enough to send me some pictures of the interiors and it seems that all these cars will have a plate on the dashboard (in front of the passenger) stating it’s a Modificata and not ‘just’ a GT3 or GTE.