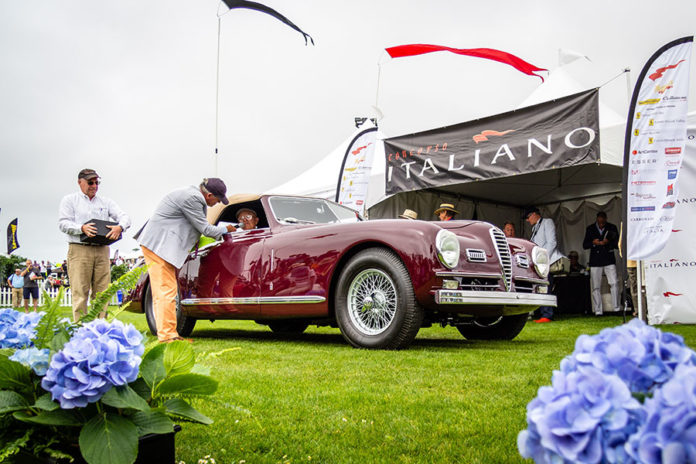 It’s time for the 34th edition of Concorso Italiano, the event that brings together
the most prestigious brands in the history of Italian car design for a showcase of current and vintage models, fostering a creative dialogue between product and passion before the discerning American public. About 800 to 1,000 Italian cars gather each August in Monterey, California, and about 10,000 lucky visitors get to admire them in all their splendour. 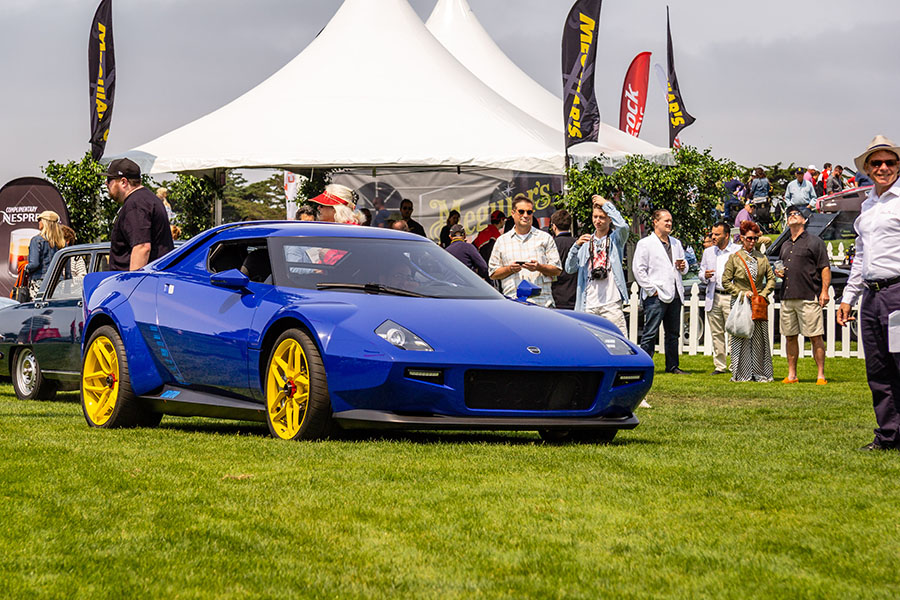 Tom Mc Dowell, President of Concorso Italiano, says: “The programme of “Concorso Italiano 2019” includes an event celebrating the 50th anniversary of the sinuous Ferrari Dino 246GT. Designed by Leonardo Fioravanti, this model was among the favourites of Sergio Pininfarina. It was the first Ferrari with less than 12 cylinders, and it reflected its creator’s ambition to develop a more affordable super sports car. Heacock Classic, a leader in classic car insurance for collectors, will host Jack May and his 1973 Ferrari Dino 264 GT. In 1975, Jack May and his Dino made history when they took part in the Cannonball Baker Sea-to-Shining-Sea Memorial Trophy Dash, establishing a world record time for the cost-to-coast run from New York to Los Angeles”. 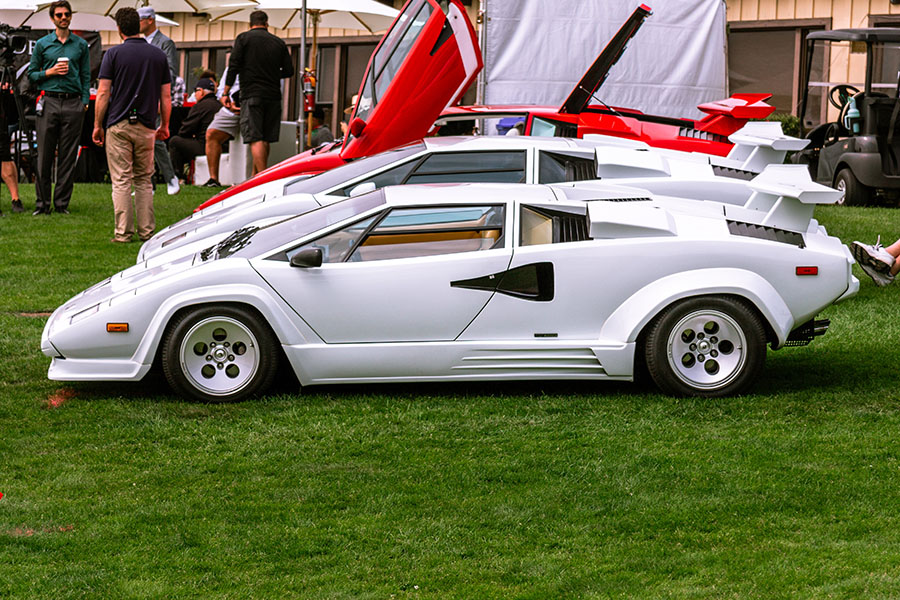 Many prestigious brands will display their models on the green hills of Bayonet & Black Horse Golf Club, overlooking the Pacific Ocean, at the heart of the most important luxury car market in the planet.

“We at Heacock Classic are proud to again partner with Jack to promote our collector car lifestyle and we’re very excited to bring him to this year’s Concorso Italiano” – said Pete Doriguzzi, Vice President of Heacock Classic – With Concorso’s focus on Italian cars, Jack and his Dino isthe perfect policyholder and car to represent Heacock’s support for the ongoing growth of our hobby.” 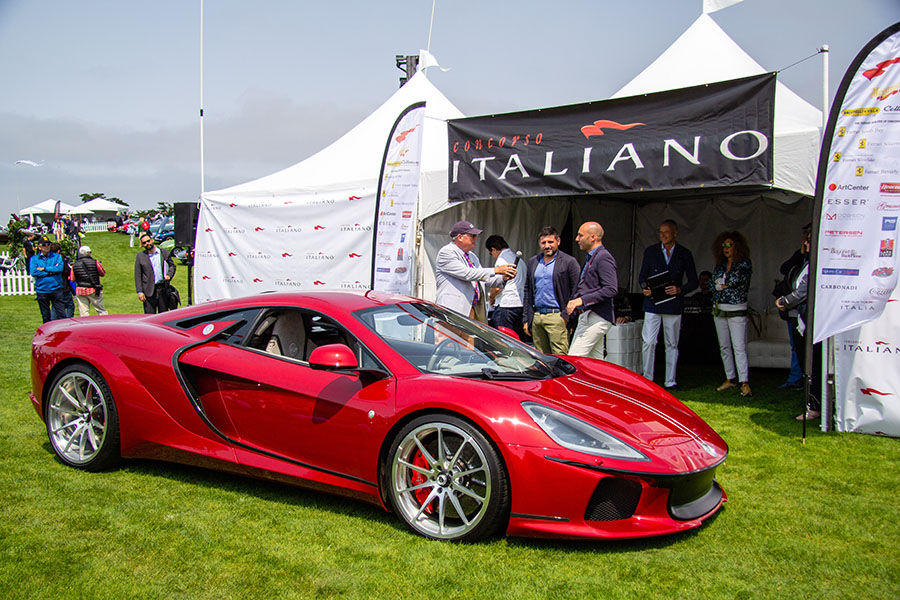 This year also marks the return of Concorso Ferrari FCA-PR Vintage, where FCA stands for Ferrari Club of America. Ryan Pimentel, the director of FCA-PR Concorso, will chair the jury, joined by a team of experienced and highly talented judges. The VFC (Vintage Ferrari Concours) evaluation is open to all Ferraris pre-2011 and will be carried out along the guidelines of the International Advisory Council for the preservation of Ferrari automobiles (IAC / PFA). 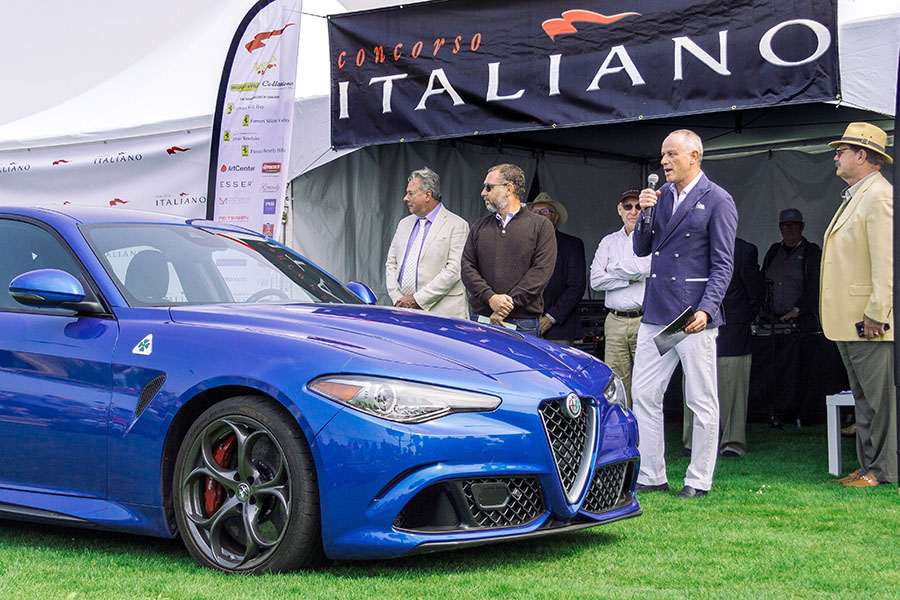 The FCA Group exhibition is dedicated to Fiat, Abarth and Lancia and to the 50th anniversary of Club Fiat America. It was the summer of 1969 when Fiat America was established, together with North America’s first Fiat Club. Its mission was – and still is – to promote the image and support the preservation of vehicles by Fiat and its Italian subsidiaries. The Fiat America Race, Rally and Tour Group, which is active year-round and organizes numerous events, will be especially involved this summer on the occasion of its anniversary, culminating with its participation in “Concorso Italiano”. As guests, the Fiat and Abarth Clubs will collaborate with “Concorso Italiano” to make sure this is the central event in their celebratory club activities. 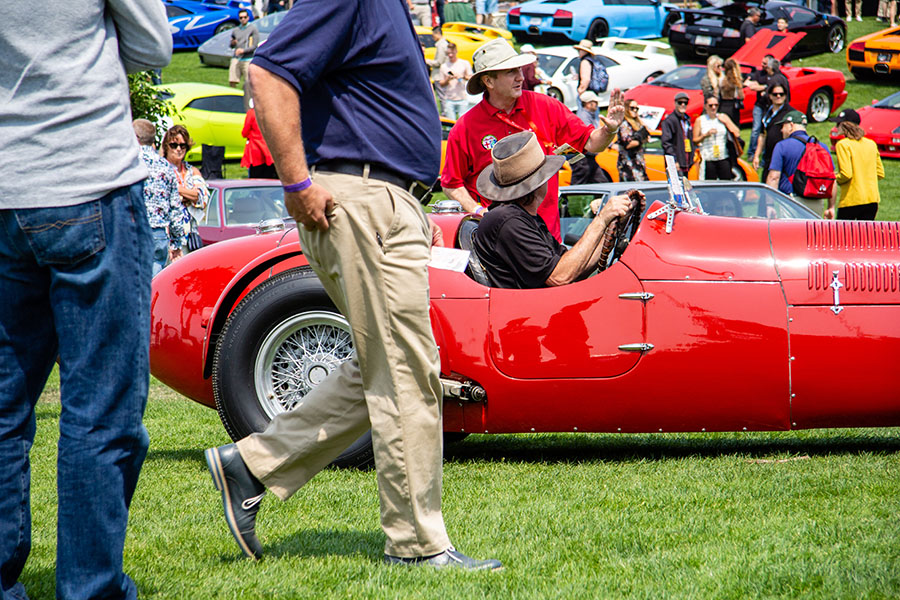 Alfa Romeo will also be present, and enthusiasts will have a chance to admire three iconic models by the Biscione house: the legendary Giulietta and Giulietta Spider models from 1955 – four-wheeled emblems of Italian Dolce Vita, and the Junior Zagato, which is celebrating the 50th anniversary of its first appearance in 1969.

Additionally, a rare 1964 Zagato prototype, shipped to America for the occasion by Turin-based collector Marco Gastaldi, will be on display. It is one of only three Zagato prototypes built on a Hillman Imp chassis, based on a design by Ercole Spada. The vehicle is lighter than the original and its design is far more advanced. Elio Zagato held high hopes for this project, even establishing a British-based subsidiary: Zagato Ltd. This model, the only one with adjustable “eyebrows” above the headlights, took part in the 1964 edition of the
Earl’s Court Car Show. It still has the original UK registration listing “British Zagato Ltd.” as manufacturer. 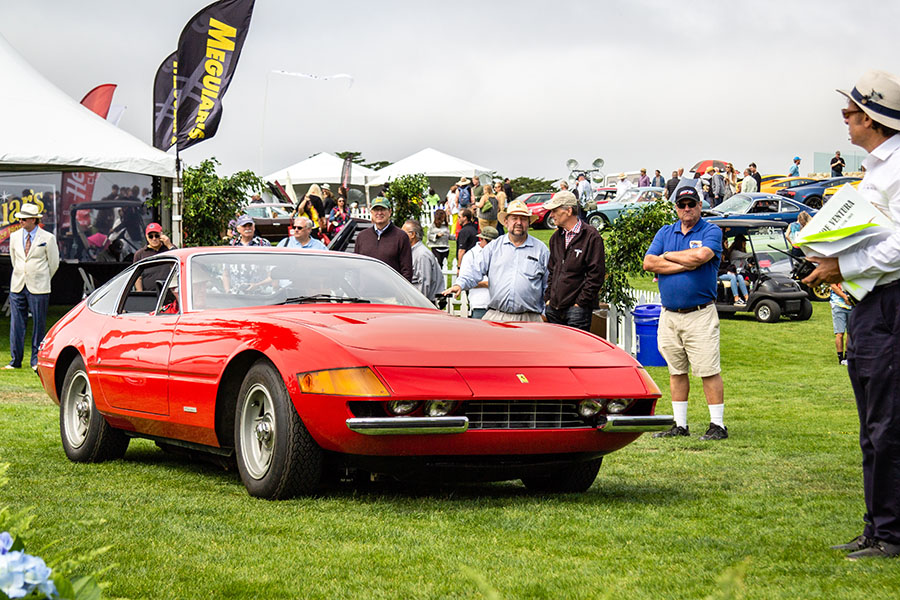 De Tomaso, another historic brand, will also be among the stars of “Concorso Italiano” as it celebrates 60 years since the company’s founding in 1959. For the occasion, KABC-TV meteorologist Dallas Raines will display his 1974 Pantera L, an iconic supercar of the Stylin’ Seventies. The vehicle was recently restored and is ready to be showcased in all its beauty.

Additionally, the Ideal Team Ventures, who secured the De Tomaso brand, has launched and will display the all new P72. This spectacular supercar will sure to please the audience at the Concorso Italiano. 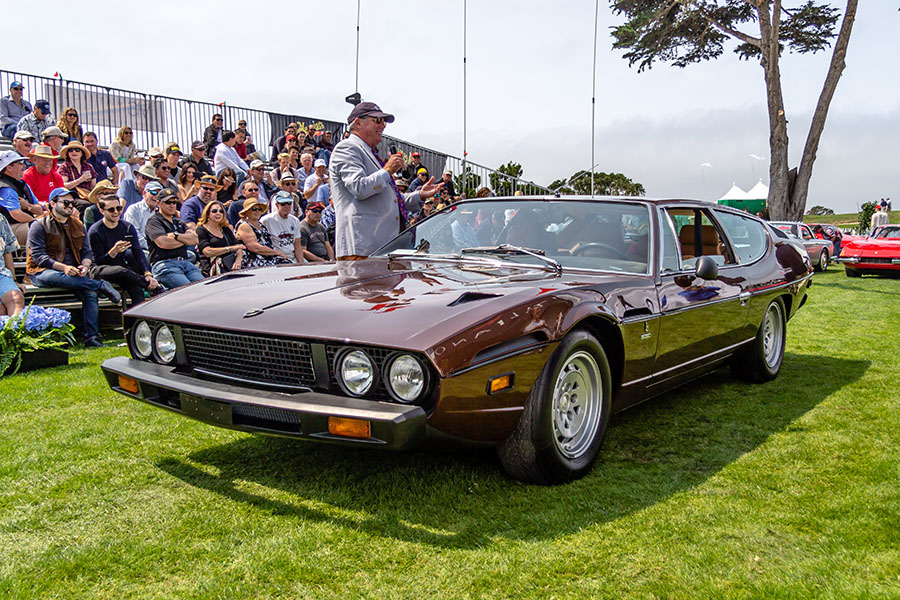 Issimi, the premier platform for peer-to-peer car sales, will proudly showcase the 542-hp MAT New Stratos 2019, built on a Ferrari F430 platform, which pays homage to the legendary Lancia sportscar from the 1970s (492 units built between 1973 and 1978). The striking design of the New Stratos reprises the unmistakable lines of its world-famous predecessor, offering an exciting new twist on the most iconic and successful rally car of the 1970s. For MAT (Manifattura Automobili Torino), being tasked with the realization of the New Stratos represents a reward for all the progress made by the company in recent years. Since its founding in 2014, MAT has been involved in 4 different projects related to the design, development and manufacturing of hypercars and racing prototypes, establishing itself as a niche leader name in the Italian automotive landscape. 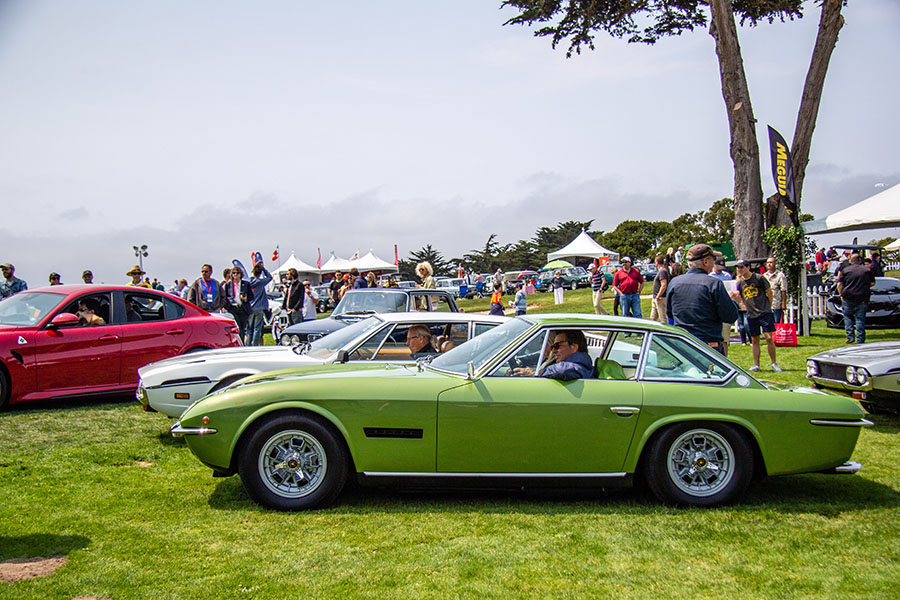 UAE-based automaker W Motors will present its newest hypercar, the famous Fenyr Supersport, driven by Ralph Debbas himself, the company’s Lebanese founder and CEO. The W Motors Fenyr Supersport was designed and developed in Dubai by W Motors in partnership with Magna Steyr Italy, Studio Torino and RUF Automobile. The vehicle, which sells for 1.4 million dollars, was engineered and assembled in Turin.

Triumph will celebrate the Italia 2000 model, a coupe built on the chassis of the TR3, in limited production from 1958 to 1962. This elegant and highly refined model is a true rarity, sure to awe all those who will be lucky enough to see it live. 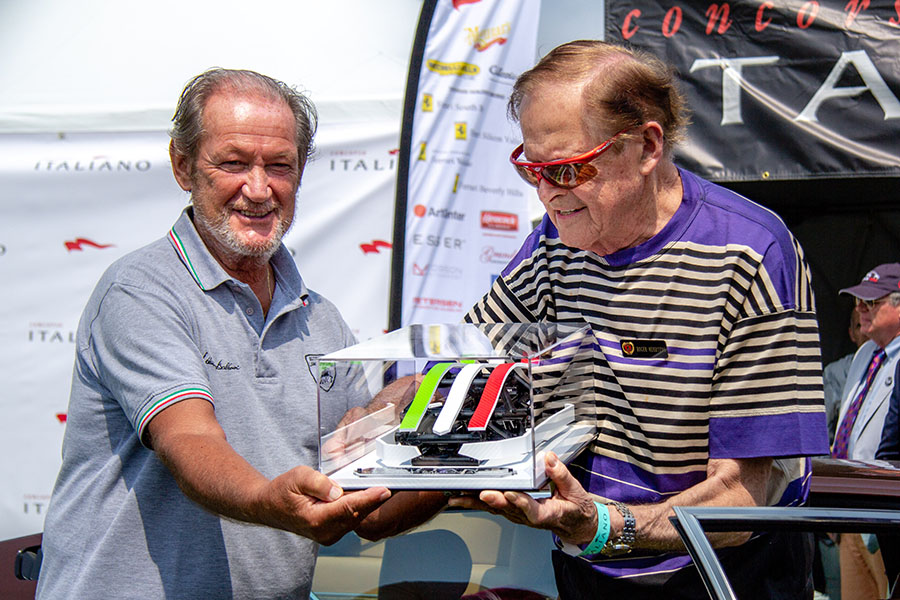 Pirelli, one of the world’s largest tyre manufacturers and the global leader in the prestige and premium segments, will partner with “Concorso Italiano” through Pirelli Tire North America. Active from over 140 years, the brand has recently expanded its portfolio with a range of premium products that includes classic car tyres designed to blend style with performance. This link to the world of classic cars has prompted the company to join “Concorso Italiano” with the Pirelli Perfect Fit award, raising funds for the Concorso Italiano Foundation, which supports the children of Jacob’s Heart Children’s Cancer Support Service. 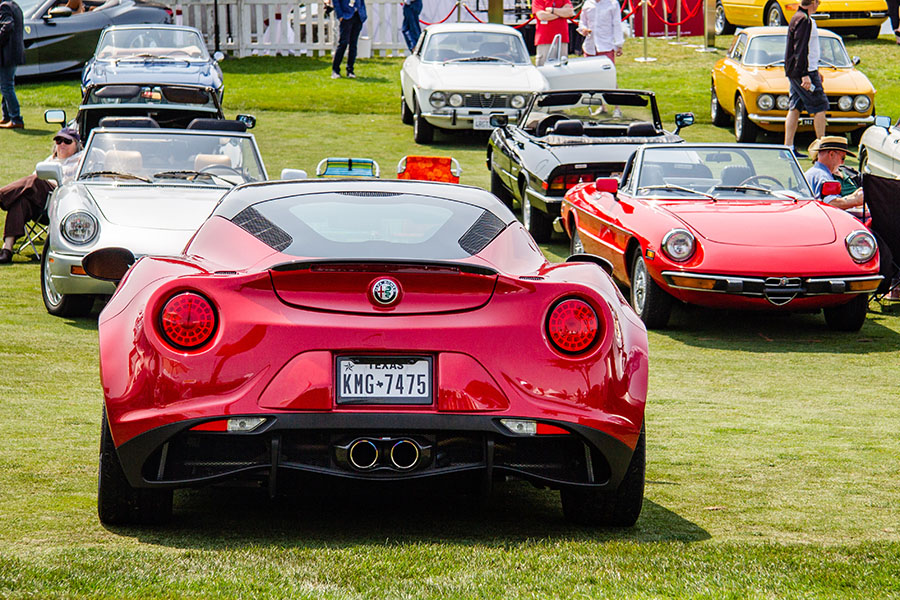 One of the awards at Concorso Italiano 2019 is the Preservation Award: a special prize dedicated to Doug Magnon in recognition of his lifelong passion. Magnon was a staunch supporter of the local automobile community who firmly believed in the power of cars to enrich people’s lives. The prize will be awarded to an owner who has never been tempted to modify their vehicle in the hopes of improving it. Preservation doesn’t mean perfection: it means preserving the original driving experience. 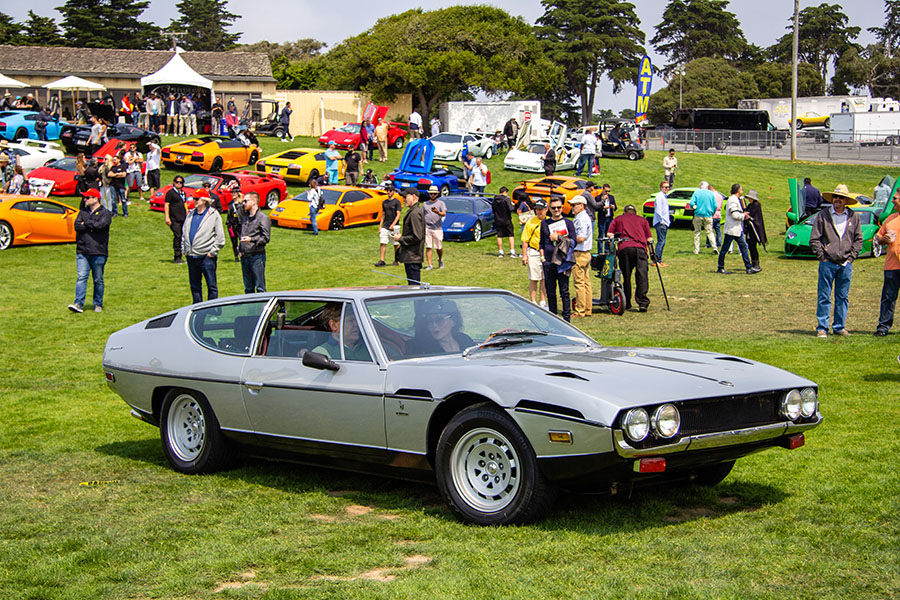 Finally, there will be a pleasant surprise for all two-wheel enthusiasts: the exhibition of a rare models from the Talbott Motorcycles collection. Over the years, Robb Talbott has collected about 200 motorcycles from 16 different countries. Surely, this particular exhibition will warm the hearts of the many riders and bike enthusiasts in attendance.