Steve Jenny has tested around 90 percent of all Bugatti vehicles sold. A dream job with enormous responsibility. 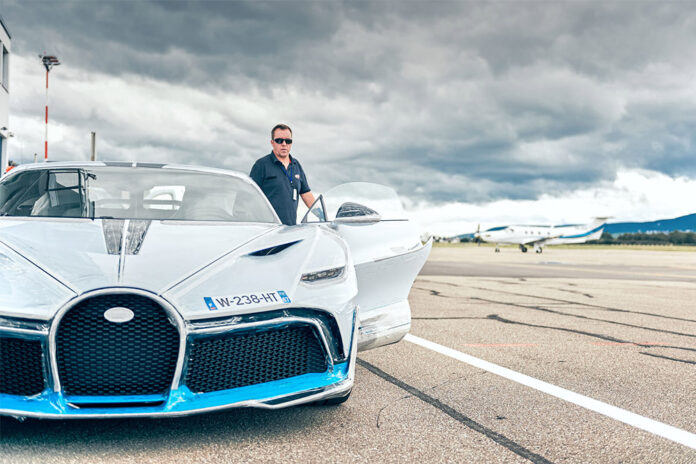 Focused entirely on the task at hand, he drives down the track, sensing every vibration and detecting the most minute audible and tactile inputs. Steve Jenny is a test driver at Bugatti and in charge of final delivery, responsible for ensuring the world’s greatest hyper sports cars are delivered in perfect condition. A dream job, of course. But one that also requires a lot of discipline and focus. Every drive must be reproducible and comparable, with around two vehicles per week put through the meticulous process, each of them with a different configuration. No car has been like any other in the past 17 years, but he must ensure they feel like a Bugatti. As an expert for quality assurance, Steve Jenny pays attention to the smallest detail, checking 90 percent of all Bugatti vehicles handcrafted in Molsheim to this day, and driving more than 350,000 kilometers in the Veyron, Chiron and Divo. To him, it’s more of a passion than it is a job.

Raised in Alsace, the Frenchman has always had performance engineering in his blood. After getting his driver’s license, he built a rally car and even took part in a rally as a co-driver before he went on to become a precision mechanic and measurement technician. Steve Jenny, then sought further education and becomes a quality inspector with a keen eye on precision and quality. At renowned supply companies like Mahle and BBS, he developed motorsport components designed to withstand the most brutal wear, G forces and temperatures.

In May of 2004, a friend calls him and tells him about cars on the private racetrack in Colmar that are as fast as fighter jets. “That piqued my interest and I drove right over. Of course, they weren’t jets, they were Bugatti Veyron prototypes,” Steve remembers. He does some research and finds out that the historic car brand is back in existence and handcrafting the first hyper sports car in Molsheim, not far away.

In June, he’s at a mountain race near to Molsheim and curiosity gets the better of him – he goes to take a look at the Bugatti facilities. He’s deeply impressed by the blending of Bugatti’s heritage with precision engineering, and a short time later sends out a job application.

“On a Friday in July, I got a phone call in the afternoon. They said I got a job. I drove to Molsheim immediately and signed my contract as one of the first employees,” Steve says. His future job: creation and analysis of a vehicle inspection department. He would be responsible for developing a process that would ensure each and every Bugatti works perfectly and adheres to the same strict criteria. It wouldn’t be a Bugatti until Steve had approved it.

Over the coming months, he developed new quality inspection processes and installed a measurement and analysis room, where vehicles are tested thoroughly before being delivered to customers. “Bugatti always demanded that cars must be delivered in perfect condition. A hyper sports car that goes faster than 400 km/h must work perfectly,” the Frenchman explains.

His first ride in a Veyron on March 3, 2005, is but a vague memory. “I was much too nervous. As a passenger, sitting next to the experienced quality engineer, I had to focus on many technical aspects. So, I wasn’t really able to enjoy the ride,” says Steve.

Christoph Piochon, who was then the Head of Quality Assurance Production, managed the production department and was looking for a passionate driver and technician, who knew his way around Alsace, to start work in September 2005. The goal was to test drive every Veyron after technical inspection, according to a pre-defined inspection program, before delivery to its new owner.

“When he entrusted me with this job, I was proud and grateful. Proud, because the Veyron is an incredible and technically unique car, and grateful because he gave me so much credit upfront. To me, it was one of the best days of my life,” says Steve.

In the beginning, the experts debated how many kilometers would be necessary for an inspection test drive, in order to cover as many of the situations that customers might experience as possible. Apart from driving on motorways, highways and in cities, the test drive also includes acceleration and slalom passages at an airport and on a racetrack. Bugatti vehicles are the only cars in world to be subjected to such a strict and intensive final inspection process.

Initially, Steve Jenny checks which region the car will be delivered to – and the homologation set-up – followed by the configuration the customer selected. Were all the bespoke touches and options the customer wanted included? Next, the quality controller tests all electric functions of the car. Only if this check is successful, Steve Jenny starts the W16-engine and slowly drives the car out of the Atelier. Then follows one of four defined driving routes: summer, transition, winter and analysis. “It’s like Antonio Vivaldi’s Four Seasons. Every tour has its own special moments, but they all fit together perfectly,” he explains.

The test drive takes up to five hours and usually covers a distance of about 300 kilometers across the Alsace region. During the driving dynamics inspection over the next few hours, Steve Jenny checks pedal weights and responsiveness, steering feel and listens intently for any unusual sounds. At the 80-kilometer mark, he tackles a rough cobblestone road, delivering a stern test for measuring comfort and noise from the suspension.

“You have to feel the car with every fiber of your body and interpret its responses correctly. Technical expertise is helpful in this effort, but experience is paramount,” he says. The winding roads of the Vosges mountains are ideal for this drive.

For acceleration and high-speed testing, Steve drives every Bugatti on the closed runway of Colmar airport, pushing his cars nearer to the limits they were designed for. There, the hyper sports cars undergo various function tests at speeds exceeding 300 km/h: launch control, airbrake deployment, rapid lane change, heavy braking at 200 km/h, full braking and an ESP-check. These tests are critical in delivering confidence for Bugatti drivers all over the world, who wish to travel faster than any other production car is capable of.

“With such an individual and handcrafted vehicle, everything must be perfect. Our aim is to correct even the smallest cause for criticism before shipping the car. Only then will our customers be happy,” says Steve Jenny.

After the tests at Colmar airport, Steve heads back to the Atelier at a more leisurely pace. There, the test driver puts down his notes; only if the car fulfils every one of a long list of criteria is it prepared for the next step. Mechanics change the oil in the gearbox, change the wheels, and attach the original underbody. This is followed by a one-hour test drive, spanning at least 50 kilometers, to arrive at the final driving dynamics approval. All in all, Bugatti vehicles are driven between 350 and 750 kilometers for detailed testing, before being shipped out.

When asked whether his job ever gets boring, Steve Jenny shakes his head. “No. Every day is unique and driving these amazing cars is a source of continuous joy to me,” he says.

“With the Chiron and its 1500 PS, Bugatti has perfected the hyper sports car. In the Chiron Super Sport, the 8-liter W16 engine even delivers 1600 PS and achieves speeds of up to 440 km/h. The drive for perfection and optimization simply never stops at Bugatti,” says Steve.