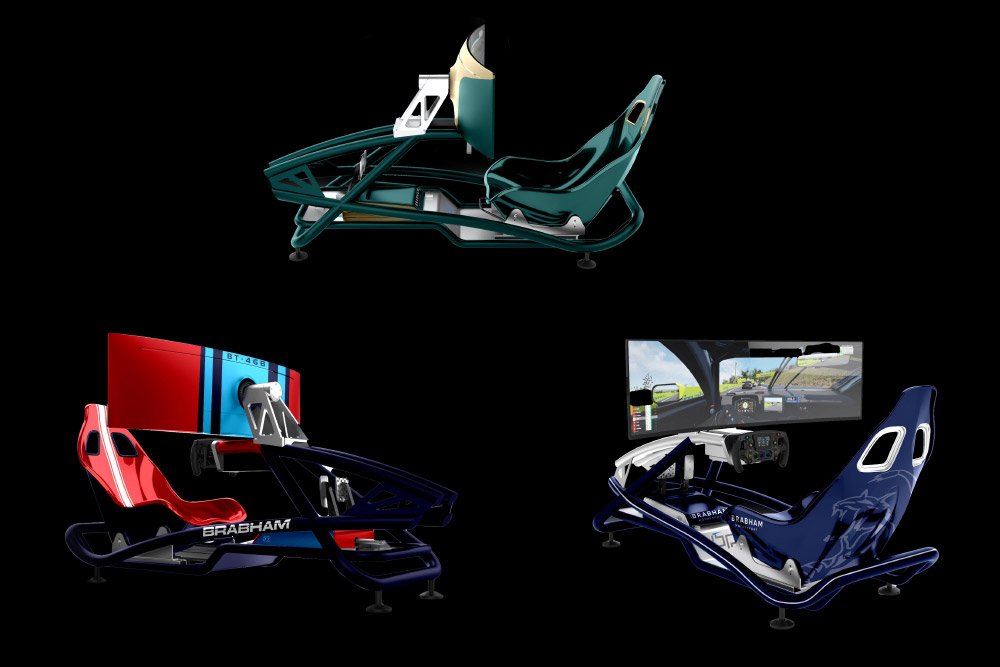 Brabham Branding has collaborated with Base Performance Simulators (BPS) to create a limited run of special edition simulators that will both celebrate the illustrious history of Brabham in motor racing and bring the iconic designs into the esports age.

The Brabham name is synonymous with engineering and innovation, with Sir Jack Brabham setting new standards in grand prix racing during the late 1950s, first leading the Cooper brand to global success before establishing Brabham as a leading name in the sport in 1962. Jack’s third world title in 1966 made him the first, and to date only, driver in history to win the Formula 1 World Championship in a car of his own making.

Through this new partnership with Base Performance Simulators, Brabham Branding has been able to pay tribute to some of its most iconic grand prix cars, bringing elements of their styling into the digital age.

Each rig will make use of cutting-edge simulation technology, allowing drivers to test, compete and play on a truly professional level – be they professional racing drivers, esports competitors, or enthusiastic home gamers.

The three limited-edition Brabham Motorsport / Base Performance Simulator racing sims are as follows:

BT19
The BT19 from 1966, is the car that Sir Jack Brabham raced to his third Formula 1 World Drivers’ Championship, and Brabham’s first Constructors’ Championship. It was a remarkable achievement because it made Jack Brabham the first and so far only driver to win the world championship in a car of his own construction. The BT19 sim reflects the green and gold colour scheme of this pioneering era.

BT46B
The BT46B, also known as the ‘Fan Car’, was introduced at the 1978 Swedish Grand Prix as a counter to the dominant ground-effect Lotus 79. The design was so dominant, that after consultation with the sport’s governing body, the FIA, then-Brabham F1 team owner Bernie Ecclestone decided to withdraw the car from competition after just one race. The BT46B sim brings the red, white, and blue of this iconic car back to life.

BT52
The BT52 was designed for the 1983 F1 season and took Nelson Piquet to his second world championship title at the height of Formula 1’s power-hungry turbo years. What makes this car so remarkable is that Gordon Murray and the design team had only six weeks to design the car after the FIA banned ground-effect cars late in 1982, meaning that the planned BT51 could not be raced. Piquet made superb use of the mighty BMW-powered BT52, which boasted in excess of 1200bhp in qualifying trim, to defy the odds and score three victories on the way to the title. The distinctive blue and white livery sets will make this sim the centrepiece of any area.

Brabham and Base Performance Simulators also have more of a history than you may think. Base Performance was founded by veteran sportscar racing driver Darren Turner in 2010 and has risen to become one of the UK’s leading driver development simulator companies. But before that, Turner shared back-to-back Le Mans 24 Hours victories with David Brabham, Jack’s youngest son, as part of Aston Martin Racing’s factory GT1 programme in 2007 and 2008.

“The Brabham Branding team are excited to not only be involved in such a great project, but also to see these incredible works of art come to life in a way that will inspire people to get behind the wheel and develop their driving skills. As we continue to grow the Brabham brand through our Brand Partnership Programme, this new collaboration with BPS is the next exciting chapter where drivers who enjoy driving on simulators can be part of the Brabham journey.”  – David Brabham, owner of the Brabham racing name

James Guess, Director of Business Development at BPS, said: “It’s fantastic to be working with an iconic and historic brand like Brabham. We have worked hard at BPS to develop the ultimate racing simulator for the home user, which will suit everyone from the enthusiastic gamer to professional racing drivers. BPS founder, Darren Turner, already has a successful history with the Brabham name, winning the GT class at Le Mans with David Brabham in 2007 and 2008 so we’re delighted with this exciting partnership.”