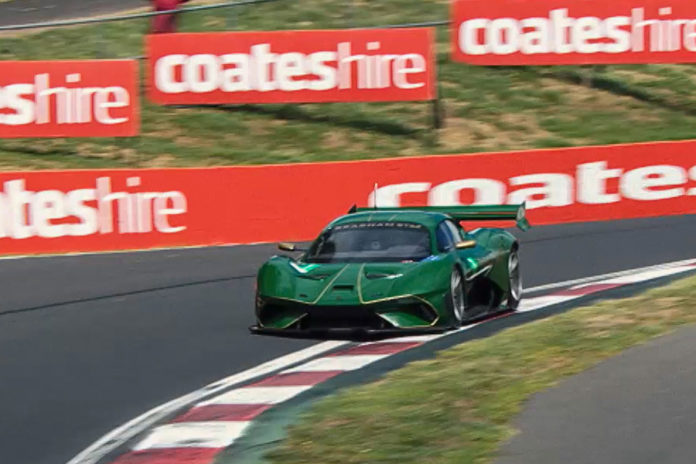 The first weekend in February 2020 saw the running of the Bathurst 12-hour. The same weekend in 2019 saw the Brabham BT62 make headlines, setting the fastest time ever for a closed-wheel vehicle around Australia’s most famous circuit.

Just how fast was that lap? And how did we do it?

V8 Supercars are Australia’s most popular racing class. It’s the series that carries the torch and continues the mystique of Bathurst as Australia’s most challenging, and most famous, racing circuit. Its champions are household names in Australia – Jane, Firth, Brock, Moffat, Johnson, Bowe, Richards, Brabham, Perkins, Skaife, Lowndes and Whincup.

The fastest-ever lap around Bathurst in a V8 Supercar was last year’s Bathurst 1000 pole position qualifier, Scott McLaughlin, at 2:03.378.

On 2 February 2019, the Brabham BT62 surpassed them all, setting a lap time of 1:58.679 – shaving 2.9 seconds from the GT3 lap record and an astounding 4.7 seconds from Australia’s fastest ever V8 Supercar lap. What makes the record all the more remarkable is that it was broken after only 12 exhibition laps without any real set up time.

Luke Youlden is no stranger to Bathurst. He’s lapped the Mount Panorama circuit thousands of times, completing the gruelling Bathurst 1000 race multiple times over his professional career, tasting victory in 2017.

He’d never been in a car this dynamic, however, with blazing speed up Mountain Straight, amazing handling through the twisting top section of the circuit and enough power to seemingly shorten Conrod Straight and The Chase before crossing the start/finish line.

To put this lap in perspective:

The BT62 covered more than an Olympic swimming pool per second, averaging 188.5 km/h around the 6.213 km circuit.

At the speeds it was travelling – and given the BT62’s low weight and amazing downforce capabilities (up to 1600kg at top speed) – the car could have driven around 14% of the lap upside down.

The car pulled maximum loads of 2.89 g in the corners, 1.24 g under acceleration and a massive 3.51 g under brakes. That maximum braking instance involved 80kg of leg pressure applied to the pedal and resulted in the BT62’s carbon/carbon brakes heating to 675C degrees, a comfortable operating window for brakes used in F1 cars.

The power to reduce the 3kms worth of straights comes from the Brabham 5.4 litre, naturally aspirated V8 engine producing 700hp at 7400 rpm. Combine this with a 6-speed Holinger racing gearbox weighing just 63 kilos with a super-fast gear change, and you have a hypercar capable of rapid acceleration; a car that gets faster, sooner, maximising your time at top speed on the straights.

Power is nothing without control, however, and the BT62’s superior chassis dynamics and outstanding aerodynamics proved invaluable over the twisting top section of the mountain circuit.

The chassis itself is a masterpiece of design and construction. Manufactured from lightweight, high-tensile steel it provides unrivalled torsional rigidity, allowing Brabham’s engineers to concentrate on tuning the suspension to deal with the track rather than compensating for compromised chassis performance. The chassis features adjustable anti-roll bars, full camber adjustment and industry-leading, 4-way adjustable, racing dampers.

Working with the chassis to keep the car glued to the road is an aerodynamics package producing up to 1600kg of downforce at top speed. The BT62’s sculpted body is designed to manage airflow over the whole body as a continuous surface. This optimises aero performance by keeping the high-pressure air working on the upper surfaces and low-pressure air working on the underfloor. Any low-pressure wake is kept away from the critical aero surfaces and air intakes, ensuring maximum downforce and adequate cooling flow to the powertrain.

The Brabham BT62 is a tour de force of technical know-how, producing performances that rank second only to the top echelons of open wheel racing.

Born from champions, the Brabham BT62 delivers world-beating performance for the champions of tomorrow.

As for Mount Panorama, the BT62 holds the record but still has unfinished business – an even quicker time beckons.

We will not share your email address.
Automotive News