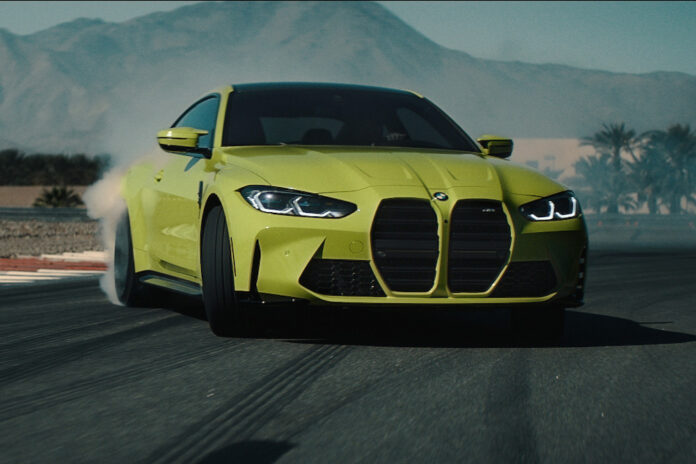 BMW of North America debuted today “The Ultimate Self-Driving Machine,” a new spot that introduces the brand’s “Power of M” campaign. The campaign’s kick-off features the all-new, second-generation BMW M4, “self” driven to the limit by actor and producer Milo Ventimiglia.

The new spot, available now on BMW USA channels, opens with the all-new BMW M4 on the track expertly drifting, cornering, and putting down all of the power that the 3.0 Liter BMW M TwinPower Turbo inline six-cylinder delivers – seemingly on its own.

By the end, it is revealed that the ultimate “self-driving” machine was actually being driven the whole time – by none other than noted actor, producer and BMW enthusiast Milo Ventimiglia. The car’s standard six-speed manual transmission serves as the highlight reminder – the M4 is a car made to be driven.

“With all of the interest in self-driving vehicles these days, what better way to crack a smile on April Fools’ than with a little manual-transmission joke?,” said Uwe Dreher, vice president of marketing, BMW of North America. “With up to 503 horsepower, and as one of the only vehicles in its category to offer a six-speed manual gearbox, the BMW M4 is the epitome of the ultimate driving machine.”

While the short shows the very best in track driving, it was filmed in a place where all automotive enthusiasts can hone their own skills: BMW’s very own Performance Center West, located at the renowned Thermal Club near Palm Springs, CA.

The facility, open to the public, offers a wide range of driving activities for people of all ages and capabilities in BMW’s latest premium performance vehicles. The Performance Center is home to BMW’s Performance Driving Schools, taught by BMW professional driving instructors on a private course. The classes provide individuals with the opportunity to get behind the wheel of the Ultimate Driving Machine and learn skills like basic car control, proper vision, emergency and panic braking, last-minute lane changes, high-speed control, precision driving, and much more.

Set in a backdrop of breathtaking mountain views, the facility features a brand new, luxurious and modern building for instruction and dining, with access to over 5 miles of racetracks. The BMW Performance Center has an additional “East” location in Spartanburg, S.C., allowing both west and east coast enthusiasts to learn the same driving performance and skill harnessed in “The Ultimate Self-Driving Machine.”

The all-new, second-generation M4 joins the all-new, sixth-generation M3 to deliver uncompromised street and track capabilities for which the model line has become well-known. Available in both core and Competition models, the vehicles deliver up to 503 horsepower and are available with either rear- or M xDrive all-wheel-drive configurations (M xDrive models coming Summer 2021). The M4 and M3 both offer the choice of 6-speed manual transmissions or 8-speed M Steptronic transmissions, depending on configuration.

The BMW Concept XM – Power and Luxury Beyond all Conventions