Gemstones from Around the World Debut in the Bentley Jewellery Collection 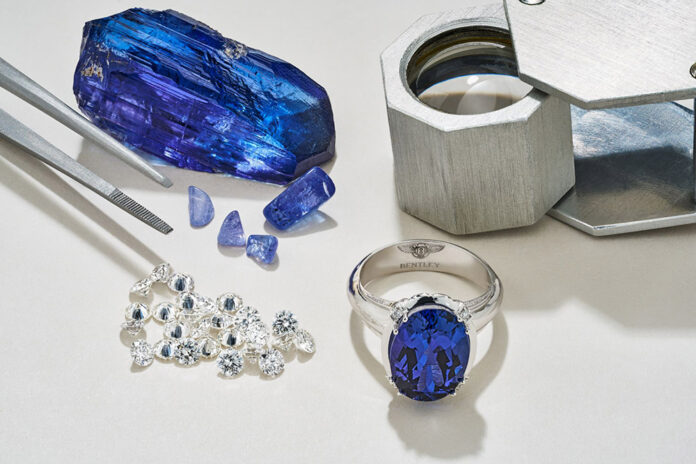 The introduction of coloured gemstones into the Bentley Jewellery collection brings a new dimension to the exquisite luxury accessories treasured by discerning women around the world. The array of colours within the fine jewellery collection mirrors the rainbow of exterior paint colours available to Bentley customers.

The stunning precious coloured gems are selected, cut and polished at the Heinz Mayer factory, Bentley’s Jewellery partner, in the town of Idar-Oberstein, globally renowned as the centre of the high-end gemstone world. Highly skilled craftspeople create the fine jewellery to a standard that satisfies the most critical and demanding clients, their imagination can be translated into the beautiful shapes and hues of the decorative pieces.

The new use of colour in the collection parallels Bentley’s focus on the range of paint and finishes through which customers can personalise their car, or work with a team of specialists to imbue their new model with bespoke colours and materials of their preference. Like a rare coloured stone, paintwork can play a significant role in making a car a true reflection of personal taste and expression of personality.

Bentley’s famous Sequin Blue colour – inspired by a sequin from a blue dress – was devised in 1996 with a combination of pigments using blue mica. It is still a popular choice and an interpretation of  what nature supplies in the form of a tanzanite gemstone. This is a highly sought-after stone of violet-purple-blue colours whose only source at present is near Mount Kilimanjaro in northern Tanzania.

Even rarer among gemstones is the Padparadscha sapphire which varies from yellowish to orange pink and together with Ruby is part of the corundum group. The rarity and purity of the stone’s colour resembles the multi-faceted tones of Bentley’s Bacalar limited edition model of 12 cars, which was revealed earlier this year in Crewe. The paintwork also inspires comparison with a bright Mandarin garnet, a vivid orange also known as ‘fanta orange’. The gemstone is very rare and valuable and has been found in only a few deposits in Africa, notably in Nigeria and Namibia.

Maria Mulder, Bentley’s Head of Colour & Trim, says research indicates that there is a deep connection between colour and personal emotions. ‘Colour influences mood,’ says Mulder. ‘There are subtle differences that change every year within the palettes we use. The environment and the social circumstance in which we live also have an effect, so now we are seeing warmer tones, not the recent neutral tones or simply the black and white of the cars of the mid-1990s.

Just as with a coloured gemstone, it takes an expert to bring out the perfect hue. ‘Our ability to use paint to define the lines and shape of a car is the similar skill to that used by a cutter to transform a rough gemstone,’ says Mulder. ‘In its raw state a gemstone won’t show all of its potential beauty, but with an expert cutter, the fire and light in the stone comes out. Paint colour needs to retain its longevity just as the stones retain their colour. Our exterior paint colour will always have that purity and naturalness because the final coat will protect it.’

The new addition of coloured stones to the Bentley Jewellery range will now offer customers another choice of adornment with which to express their personality. Just like Bentley’s use of paint colours and effects in its model range, coloured gemstones will add an emotional, exclusive and distinctive dimension to a form of personal luxury.

Precious stones being introduced into The Bentley Jewellery Collection include:

Bugatti and Champagne Carbon Reveal One of One ‘La Bouteill...