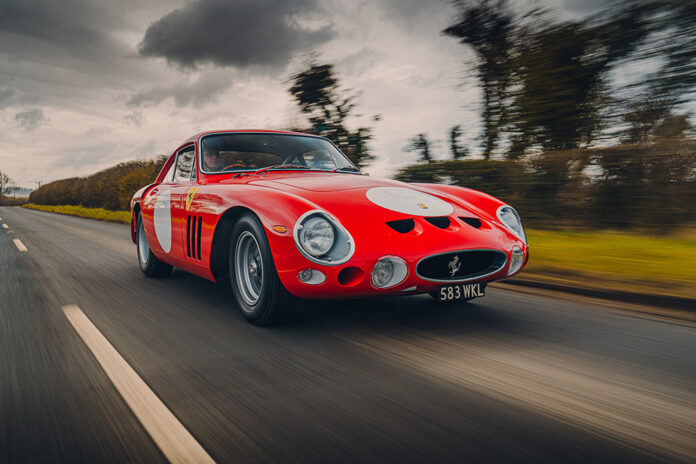 Bell Sport & Classic is proud to unveil the ultimate expression of its exceptional in-house restoration expertise, an authentic remastering of one of the rarest period Ferrari racing cars ever: the 330 LMB.

The result of a joint development programme between Bell Sport & Classic and the business’s owner, the project’s vision was to build an authentic 330 LMB, blending originality and the utmost attention to detail with the very latest restoration techniques and sympathetic enhancements in order to create the perfect, remastered machine.

Built to be used and enjoyed on the road, this one-off car is based on a Ferrari 330 GT 2+2, and pays respectful homage to the original 330 LMB – of which only four were built in period for competition purposes – with a bespoke alloy body hand-crafted using templates taken from Chassis 4725, the only right-hand-drive example ever made.

The Ferrari 330 LMB (Le Mans Berlinetta) was developed by British-born Ferrari racing driver and engineer Mike Parkes to compete at the 1963 Le Mans 24 Hours. Based upon the Ferrari 250 GTO but with a more powerful 390bhp, 4.0-litre, Colombo V12 engine, it also had a 20mm-longer wheelbase and redesigned aluminium body.

With just four examples made – three left-hand drive, one right-hand drive – the 330 LMB is a highly significant Ferrari, rarer even than the hallowed 250 GTO, of which almost 10 times as many were produced. A trio of 330 LMBs competed at Le Mans in 1963. However, the example entered by Colonel Ronnie Hoare’s British Maranello Concessionaires Ltd team was the only one to go the distance, with Mike Salmon and Jack Sears finishing fifth.

As Ferrari was preparing to transition to mid-engined configuration competition cars, the 330 LMB was destined to become Maranello’s last front-engined race car of the era and did little racing in period. Today, however, the highly prized and exceptionally valuable 330 LMB can often be found at the sharp end of the historic racing field.

When the car arrived at Bell Sport & Classic, the wings and roof were already attached; however, the dashboard was not fitted, and the door skins were incomplete. “As they were, the doors were spot-on for an original LMB. They felt super-light, but they lacked the more substantial road car weight we were looking for,” explains East. “So, we reworked them again and again, but very subtly, strengthening every single aspect including the hinges, the skins and the window frames until we got the perfect weight.”

Many of the parts required to complete the body simply could not be sourced anywhere in the world, at least not to the high quality demanded by Bell Sport & Classic. So, the only solution was to fabricate them in-house.

“We spent more than a year searching for window catches; in the end we made them ourselves to ensure we were happy with the fit and finish. Our engineering department also made the aluminium fuel filler cap from scratch,” reveals East.

Other numerous items fabricated by the Bell Sport & Classic team relating to the bodywork include the straps and the bonnet’s finishers. While an off-the-shelf Lusso windscreen was perfect for the front of the car, the rear Perspex screen had to be created in-house. As with the headlamp covers, the team first cut aluminium to shape, which was used to develop a former, via which the perfectly finished Perspex items were fashioned.

“Three years of work has been lavished on this car. And, as with all our customer restoration projects, we have applied painstaking detail to every aspect. Everything is hand-built and unique,” continues East. “It was a delicate balance to achieve, deploying modern restoration techniques to make the new LMB as comfortable and as road-useable as possible, without sacrificing any of its race-bred character.”

The project was subjected to a complete ‘dry build’. This process involved the team fitting all the trim pieces, such as door handles and windscreen surrounds along with glass, to the bare metal body to ensure that the fit of these components would be perfect after the car came back from the paint shop.

Once the team was happy with the level of quality achieved, the body was painted classic Rosso Corsa red over a painstaking ten-week period. Finally, white racing roundels were added, as they would have been in period at the Maranello factory before the assault on Le Mans back in 1963, and a pair of Scuderia Ferrari emblems painstakingly hand-painted on each front wing as they would have been in period.

To take the Colombo V12 engine to full LMB specification, Bell Sport & Classic’s engineering department converted it to a dry-sump specification and increased the capacity from 2953cc to 3967cc. “An extraordinary level of work was required to complete the process. Items such as the camshafts, timing case, water pump, oil and fuel tanks, oil filler tubes and caps had to be specially created for the car,” explains Attilio Romano.

The six carburettors are bespoke commissions in place of the Weber 42s fitted to the engine in period. The fuel rail and linkages are also bespoke creations. Once complete, the fully rebuilt engine was run-in and tuned on the dyno, and the result is 390bhp at 7000 rpm and 300 lb/ft of torque at 6000 rpm – precisely the same as in period. The only specification change has been the addition of a cooling fan, a modification that reflects the car’s road-bias.

At the start of the project, a five-speed transmission from a Mk2 330GT in Switzerland had already been sourced. While the original race cars were equipped with four-speed gearboxes, Bell Sport & Classic retained the five-speed unit as a sympathetic enhancement to improve the car’s road manners and use-ability.

The transmission was fully rebuilt using specially-manufactured selector forks and fitting all new synchros and hubs while Bell Sport & Classic’s engineers have also equipped the car with a bespoke prop shaft. The entire suspension system was stripped down and fully refurbished. The configuration features upper and lower wishbones with coil springs and telescopic dampers at the front.

A more road-focused set-up is deployed at the rear, featuring a five-bar linkage with leaf springs and a coil-over ‘helper’ damper, compared with the Panhard rod and Watts linkage of the period competition car. A rebuilt limited-slip differential completes the package.