The Audi R8 Spyder V10 Plus – A New Level of Freedom 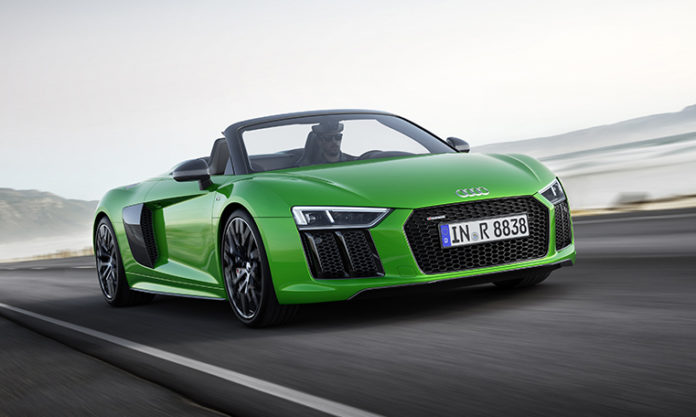 The most powerful Audi engine ever destined for series production is about to raise the tempo in what is already one of the most intoxicating driving machines offered by the brand – the open-air, high intensity R8 Spyder is to adopt the gloriously vocal 610PS V10 from the R8 V10 plus Coupé. The new Audi R8 Spyder V10 plus is capable of 0-62mph in a mere 3.3 seconds and a top speed in excess of 200mph, spurred on by its significant 70PS power advantage, and by a significant 25kg weight reduction, versus the ‘standard’ V10 Spyder.

Set to become available to order in the UK later this month, the R8 Spyder V10 plus will be priced from £147,470 OTR, and will feature a standard specification list that reflects the sporting credentials and premium positioning of this high-performance flagship. 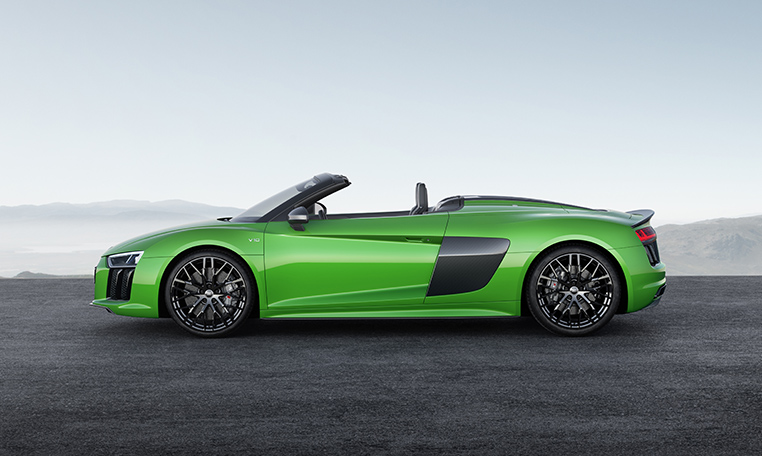 Highlights include R8 bucket seats, liberally applied carbon fibre-reinforced polymer components inside and out, ceramic brakes, the R8-specific Audi Virtual Cockpit and the option of an exclusive micrommata green paint finish for an even more cutting-edge look.

“The Audi R8 Spyder V10 plus completes the R8 model line,” said Stephan Winkelmann, Managing Director of Audi Sport GmbH. “The Spyder is now also available as a 610PS top version in addition to the Coupé. It benefits from our many years of experience in motorsport and combines breath-taking dynamics with the emotion of an open-top sports car.” 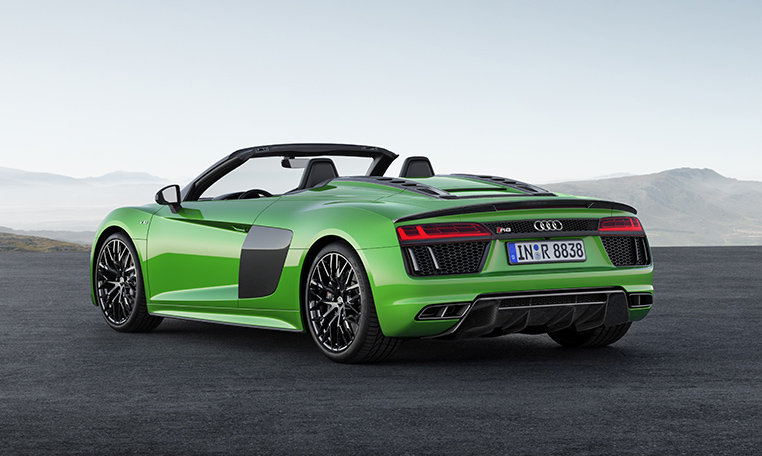 Incredibly high revving up to 8,700 rpm, and offering lightning-quick response coupled with an evocative, voluminous sound, the top V10 with its 610PS and maximum torque of 560 Nm is the most powerful series-production engine from the brand with the four rings. Compared with the Audi R8 Spyder V10, the naturally aspirated 5.2 FSI engine, with a high 12.7:1 compression ratio in the plus version, features a 70PS boost in power and a 20Nm torque advantage.

Stability and dynamics: the quattro drive

Behind the V10 there is a seven-speed S tronic transmission with lightning-fast action. The dual-clutch transmission, with its short transmission ratio, sends power to the quattro drive system in the front axle via a cardan shaft. Its key component is an electro-hydraulically activated multi-plate clutch. It is water-cooled for maximum performance. Depending on the driving situation, distribution of the drive torque by the clutch is completely variable, and in extreme cases sends up to 100 percent to one axle. A mechanical rear differential lock provides confident traction and maximum dynamics. 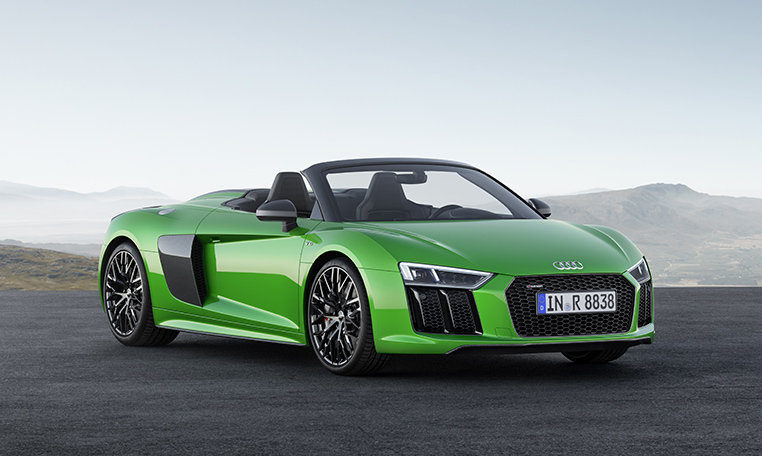 Management of the clutch is integrated in the Audi drive select dynamic driving system, which gives the driver a choice between Comfort, Auto, Dynamic and Individual modes. The standard performance mode includes the programmes dry, wet and snow. They adapt the characteristics of the drive system and suspension to the friction coefficient of the road.

As well as control of the quattro drive system, Audi drive select can also influence the operating characteristics of the accelerator pedal, the seven-speed S tronic, the steering, the flaps of the exhaust system and the optional Audi magnetic ride adaptive damper control, which uses a synthetic oil with small magnetic particles to vary damping in auto, comfort and dynamic modes. In dynamic mode, the system delivers the sharpest possible steering response and maximum handling agility. The wheels are precisely braced during cornering and body roll is largely suppressed. During braking, Audi magnetic ride counteracts the tendency of the body to dip. The performance programs from Audi drive select also make use of Electronic Stabilisation Control (ESC) for the best possible lap times. 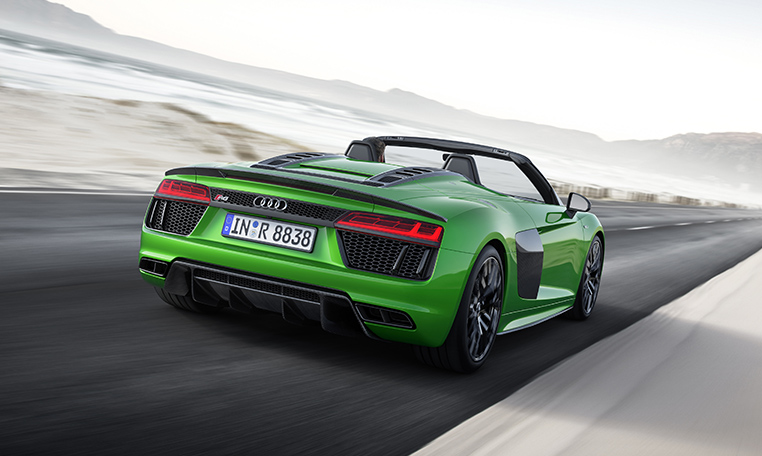 The racing car as a role model: the suspension

All four wheels of the Audi R8 Spyder V10 plus are guided through aluminium double wishbone suspension, demonstrating the model line’s close links with motorsport. The setup is firm and the electromechanical power steering offers the ideal specific combination of precision, handling and confident high-speed behaviour for a sports car. Dynamic steering with variable steering ratio is available as an option.

This boosts the car’s responsiveness at all speeds, providing high-performance cornering characteristics and quick steering behaviour. It countersteers with tiny impulses at the cornering limit to further improve stability.

Audi mounts a mix of tyres – 245/35 on the front, 295/35 on the back – on the standard 19-inch forged aluminium wheels in five twin-spoke design. The optional 20-inch wheels are shod with 245/30 and 305/30 tyres. The large brake discs – 380mm diameter upfront and 356mm on the back – are manufactured from extremely durable, temperature-resistant and lightweight carbon fibre ceramic composite. The anthracite grey fixed calipers feature six pistons on the front axle and four in the rear. 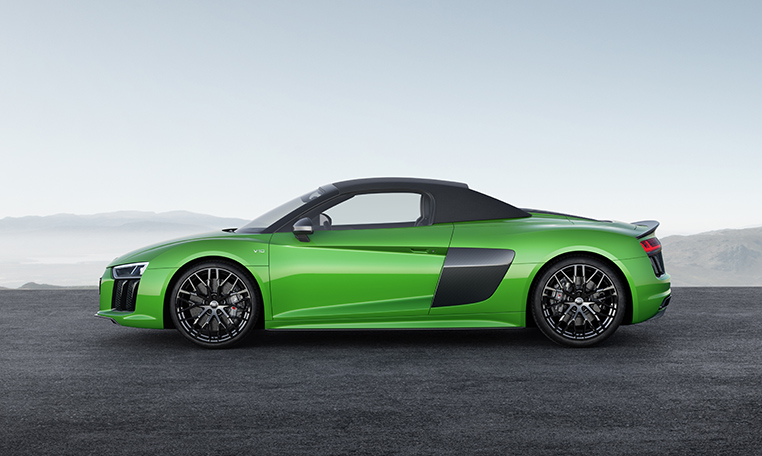 Typically Audi: the exterior skin of the cloth top is fabric, the substructure is primarily made from lightweight materials like magnesium and aluminium.

Consequently, the cloth top weighs just 44 kilograms and contributes significantly to the low weight and low centre of gravity of the R8 Spyder V10 plus. Two fins running to the rear tighten the top. An electrohydraulic drive takes 20 seconds to open or close the top, even while driving at speeds up to 31mph. Folded in a Z-shape, it is housed in a flat storage compartment over the engine.

The rear window is sunk into the bulkhead and can be retracted and extended electrically. With all of the windows closed and the optional wind deflector installed, the wind passes gently over the driver and passenger. Two steel sections pretensioned by springs in the convertible top module serve as roll-over protection. 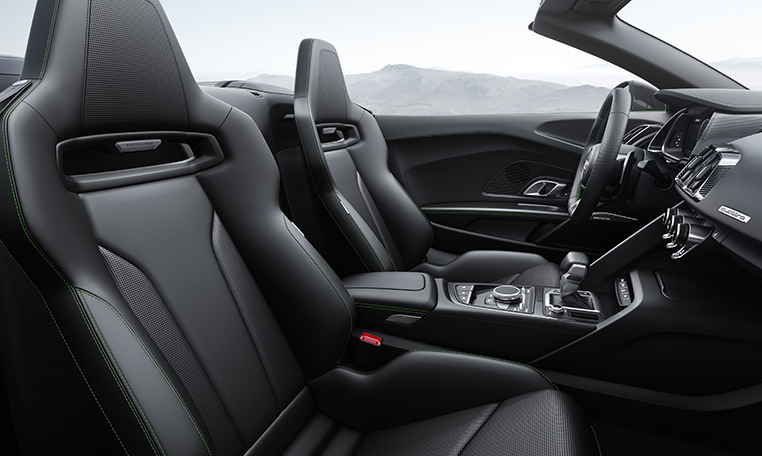 R8 bucket seats are fitted as standard in the flagship convertible. They are light, highly contoured, mounted low and bear the R8 embossing. They are upholstered in fine Nappa leather with special pigmenting that stops them from heating up in the sun’s rays. Decorative inlays are made from carbon; the pedals and footrest are in glossy stainless steel. The defining element is the “monoposto”, a large arc running around the cockpit. The dashboard appears to float weightlessly. Its lower section contains buttons and controls for the air conditioning, shaped like turbines.

As in a racing car, drivers can operate all important functions without having to take their hands off the steering wheel. The standard R8 performance leather steering wheel features integrated multifunction buttons as well as two large control satellites. The driver uses these to start and stop the engine and control Audi drive select. Two more buttons including a rotary wheel are used to control the performance mode and the exhaust flaps.

The large 12.3-inch, fully digital Audi virtual cockpit presents all information using rich 3D graphics – if desired, in a special performance view that puts the focus on the rev counter. It also serves as a gear shift indicator – when the seven-speed S tronic is being operated in manual mode, its scale has a colour background at higher engine speeds. Next to it are indicators showing output, torque, g-forces, lap times and the temperatures of the tyres, engine and transmission oil. 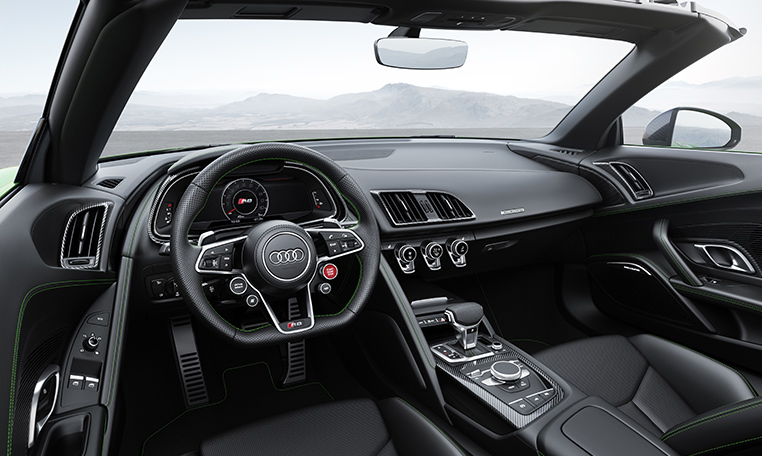 The standard equipment package for the R8 Spyder V10 plus includes a superb infotainment system – the MMI navigation plus with MMI touch. It features impressive and intuitive control logic with flat hierarchies. Added to this is a free text search that delivers suggested hits after only a few letters are typed in. The natural-language voice control function also recognises many terms from everyday speech. Standard seatbelt microphones provide for optimal audio quality, even when the top is down. In addition, the MMI navigation plus has an integrated Wi-Fi hotspot for the mobile devices of passengers.

The optional Audi connect module enables fast internet access via LTE. Its offerings include numerous services ranging from navigation with Google Earth and Google Street View to travel and traffic information as well as point-of-interest searches. In addition, the Audi smartphone interface also displays selected content from iOS and Android smartphones in the Audi virtual cockpit. The optional Audi phone box connects mobile phones to the on-board aerial and charges them inductively in line with the Qi standard. The Bang & Olufsen sound system provides an excellent audio experience – even while driving with the top down. It integrates two head restraint loudspeakers in each seat.