TSJ Exclusive: A Fast Trip Through Le Mans History – Touring the Museum of the 24 Hours of Le Mans

By: Kevin Ehrlich | Photos Courtesy of: The Speed Journal 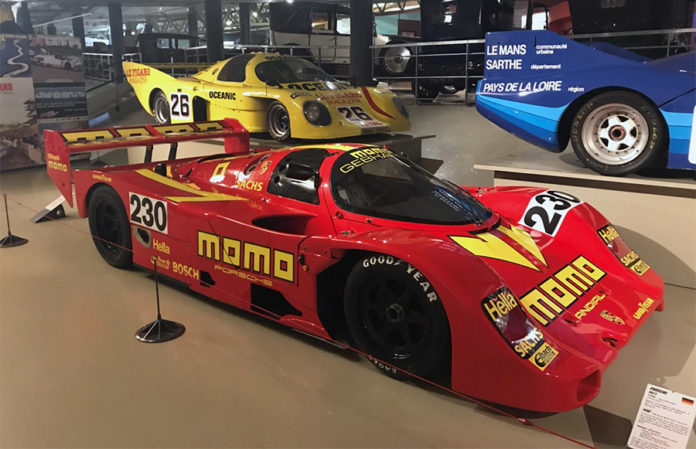 Heritage takes a long time to develop and cannot be acquired overnight at any cost. Few traditions have staying power for decades but those that survive and sustain become unique. For the 24 Hours of Le Mans, that heritage has developed over the past 95 years. Since 1923, endurance racing in Europe has revolved around the town of Le Mans on a track that is largely comprised of public roads. The Le Mans story is more than just the track, the spectators or even the drivers. 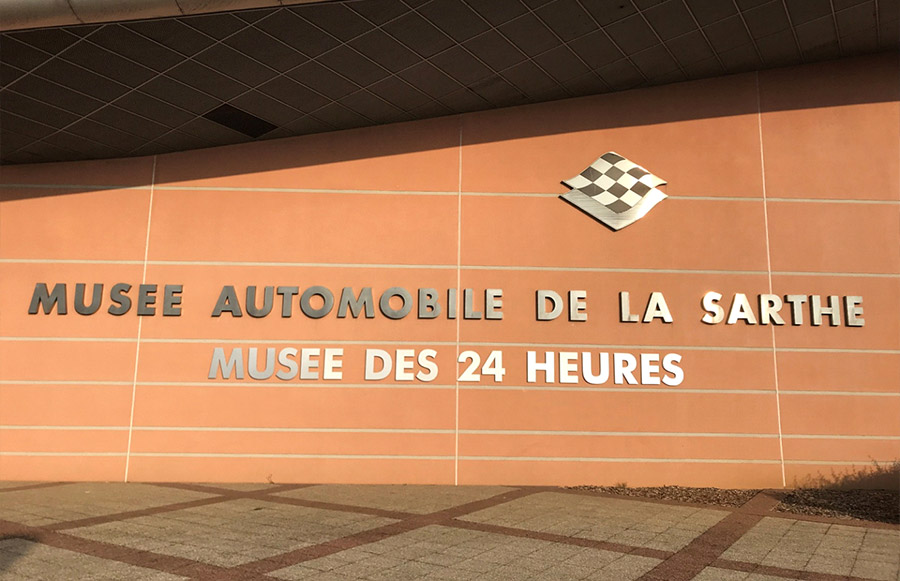 In the world of endurance racing, the motorcar itself is often the most memorable and tangible symbol of the particular race or era. The Museum of the 24 Hours of Le Mans sits just adjacent to the Le Mans circuit. Its primary objective is to provide a home for the cars that made the course famous. It is situated on the outside of the track and across from the front-straight within sight of the famous Dunlop bridge. Built in 1961, spectators and vehicles pass by the museum as they enter the circuit through one of the main gates but it is easily accessible from the public roads without needing to access the track or paddock. 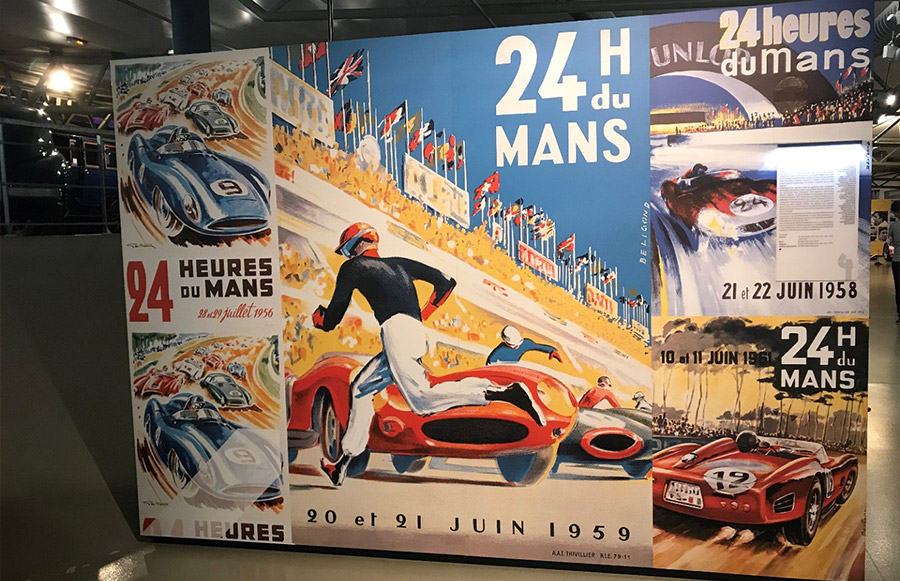 Some cars are part of the permanent collection and others are on loan, some on loan indefinitely. A privilege of the Museum of the 24 Hours of Le Mans is that manufacturers or owners of cars made famous in the race are honored to have their special cars on exhibit at this special place to gather up attention from spectator eyeballs and cameras who have made the journey. The displays change and can include features or themes and the collection includes approximately 120 cars. 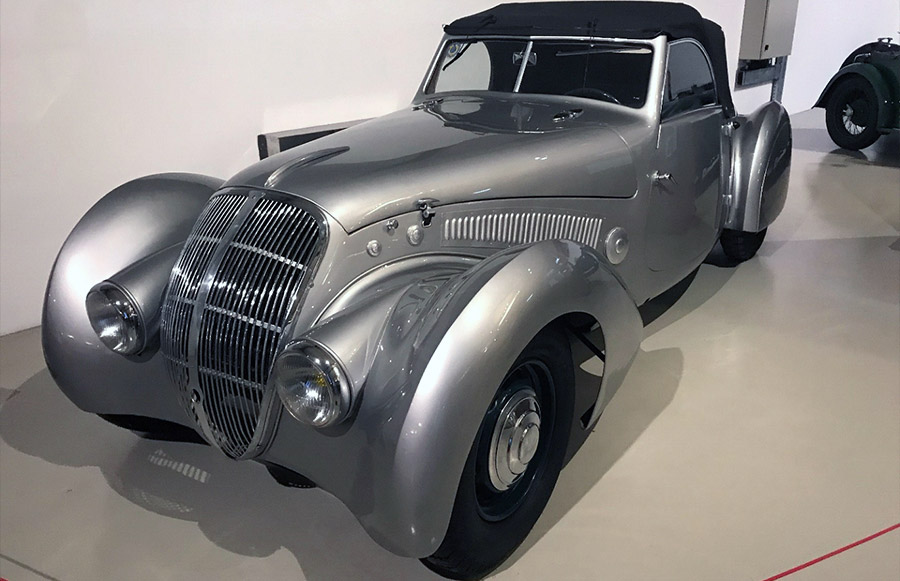 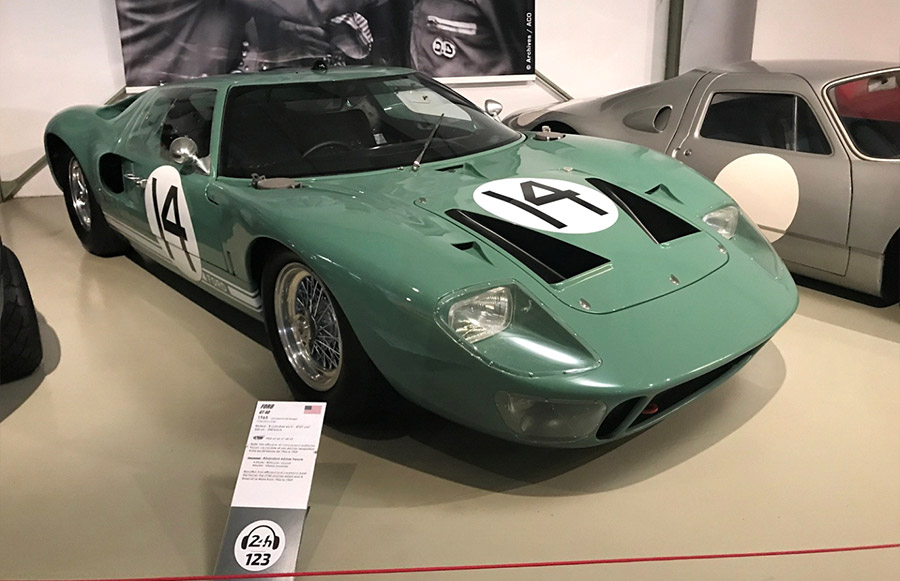 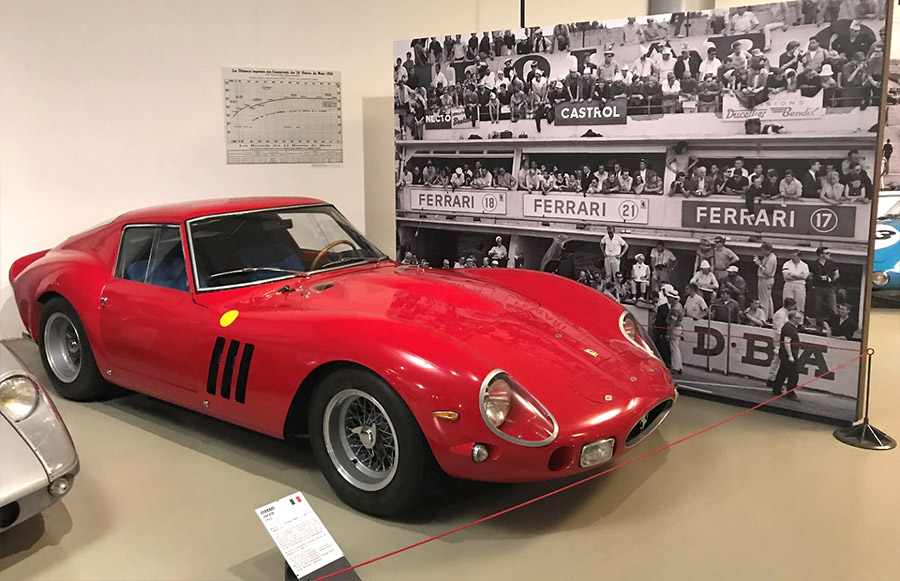 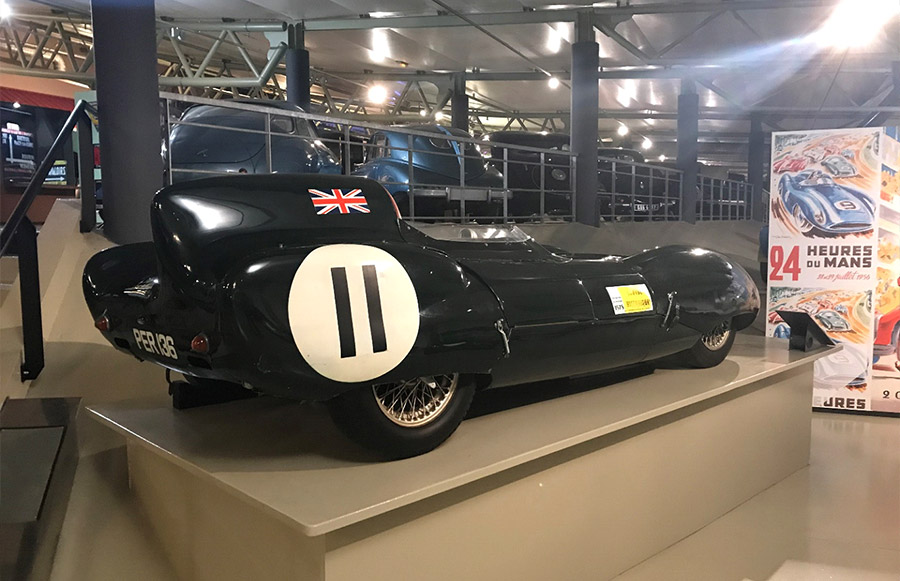 As Jeff Francis was deployed for The Speed Journal across various stops in France including the Porsche Experience Center at Le Mans, he stopped at the Museum to pay homage to the history on display. Long-time Museum Curator Francis Piquera was generous enough to share his extensive knowledge and tell the stories of the exhibits arrayed through the Museum. 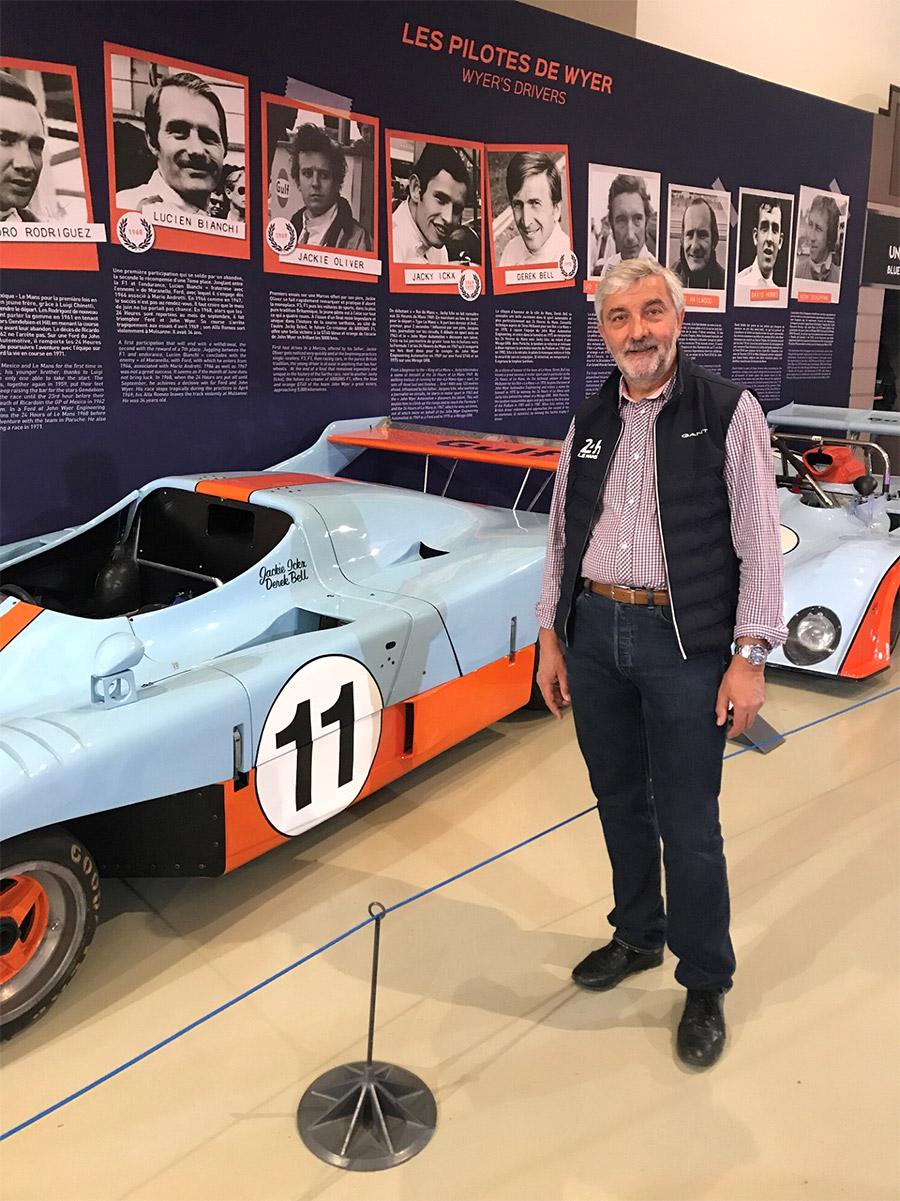 In some cases, the cars are original. In other cases, they are reconstructed or similar examples of the actual competition chassis. On the occasion of Francis’ visit, the marques on display included Porsche, Ferrari, McLaren, Peugeot, Ford, Lagonda, Jaguar, Mirage, Panoz, Aston Martin, Bentley and Cadillac. 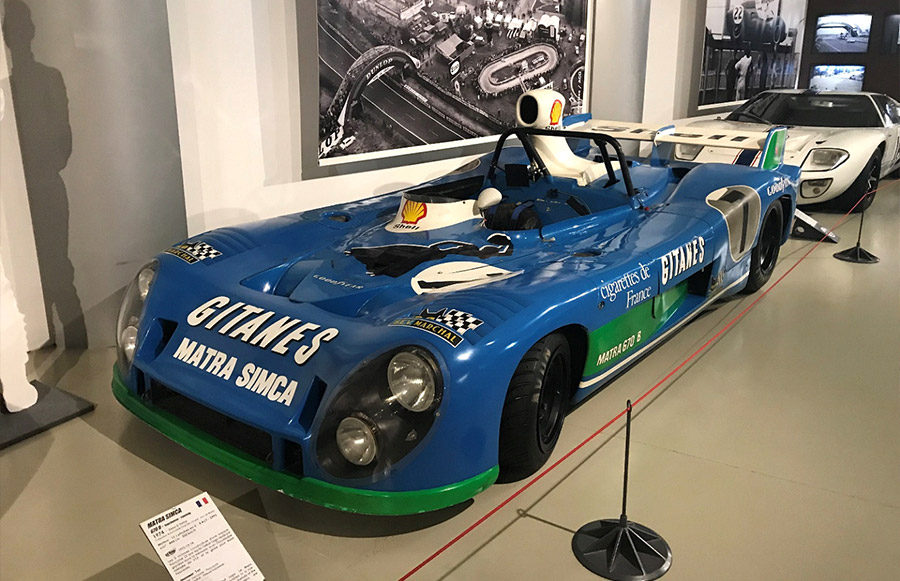 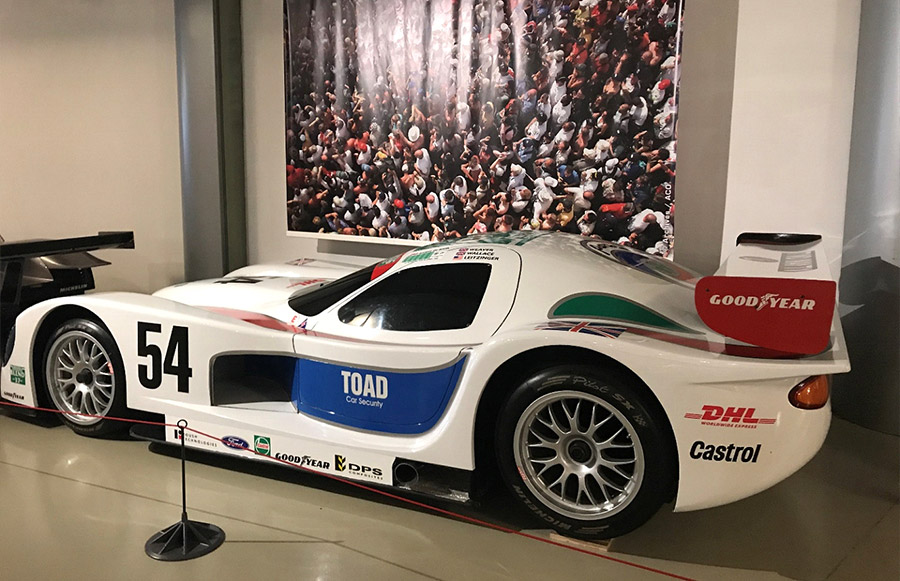 A special display celebrated the multitude of cars that carried the iconic blue and orange Gulf Oil Company liveries through the decades. A Ford GT in Gulf colors run by John Weyer took the overall win in 1968 so the exhibit was assembled to mark the 50th anniversary. A Ford GT, McLaren F1 GTR, pair of Mirages and even a Kremer K8 Spyder were assembled around the room, each representing their own era and each sporting their own take on the blue and orange colors. 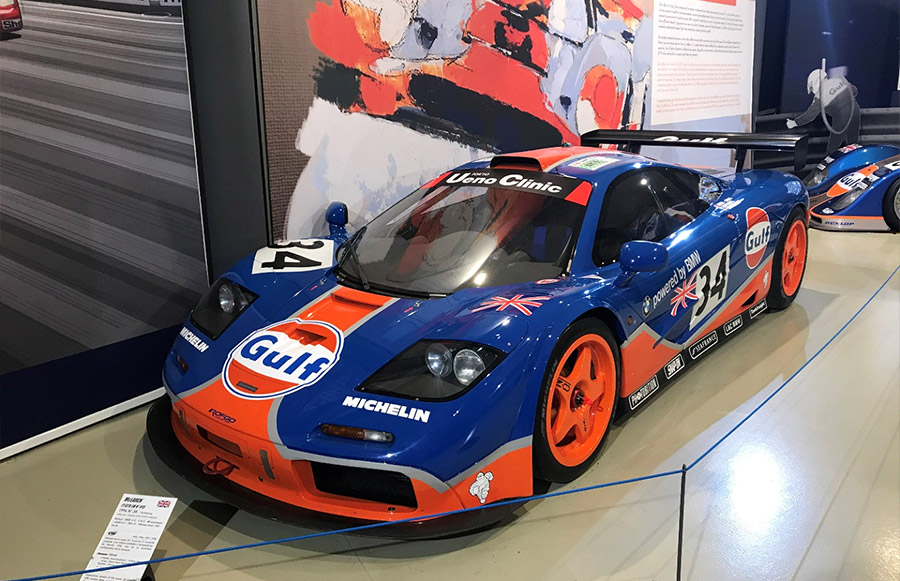 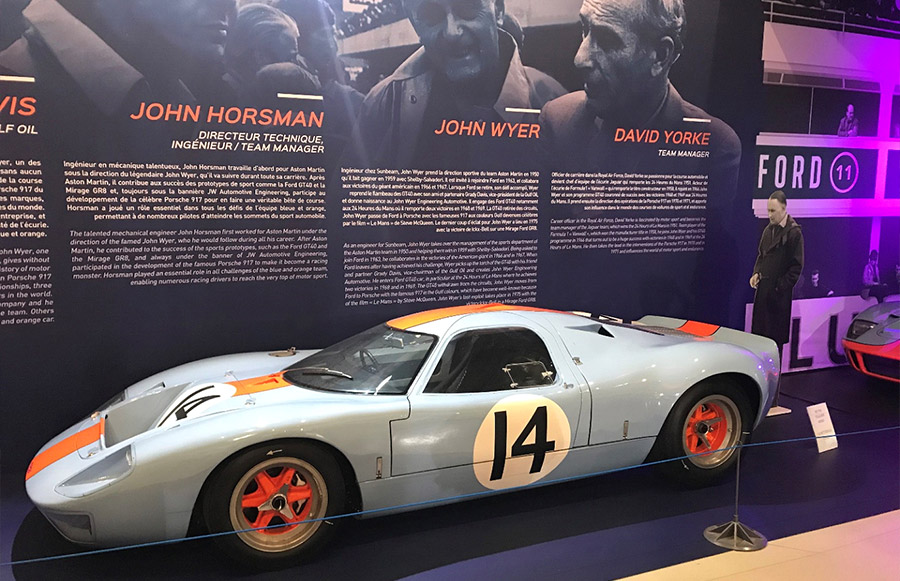 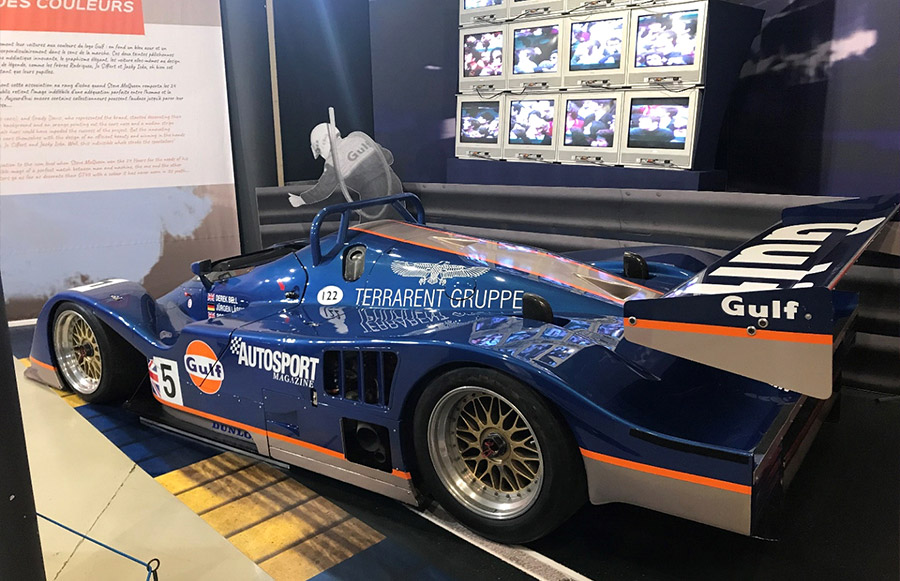 The names of the drivers associated with the Gulf cars were equally as impressive. The names of Jacky Ickx and Derek Bell featured as drivers of several cars on display. The Gulf display was a temporary display, serving to highlight an important chapter in Le Mans history before giving way to another exhibition and another chapter in due course. 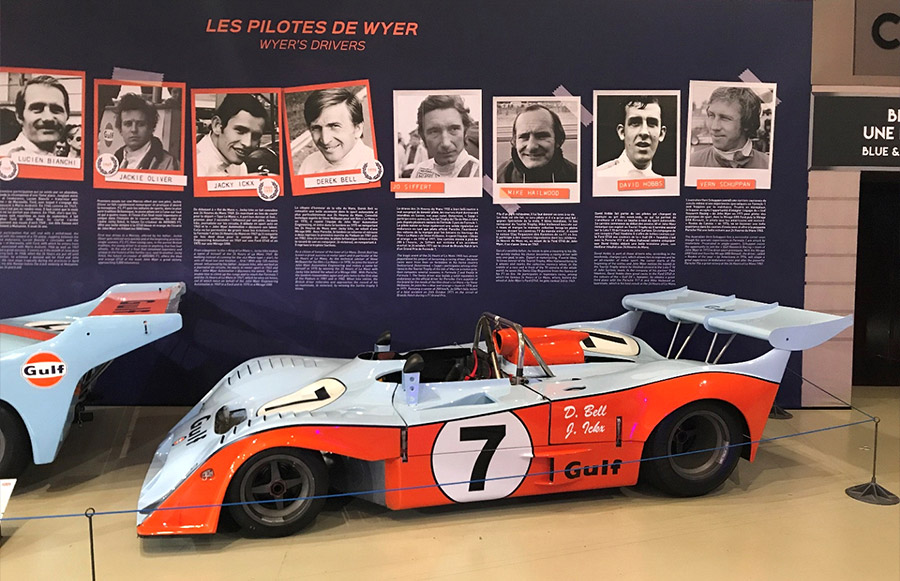 Moving past the Gulf Oil exhibit, another treat awaited. For the Porsche faithful, a rare 1971 twelve-cylinder 917 longtail has been on display in the Museum as a “permanent” fixture, on indefinite loan from the Porsche factory Museum. One of only six made and three survivors, the car originally ran with Gulf colors at Le Mans before being outfitted in silver, blue and red Martini colors. 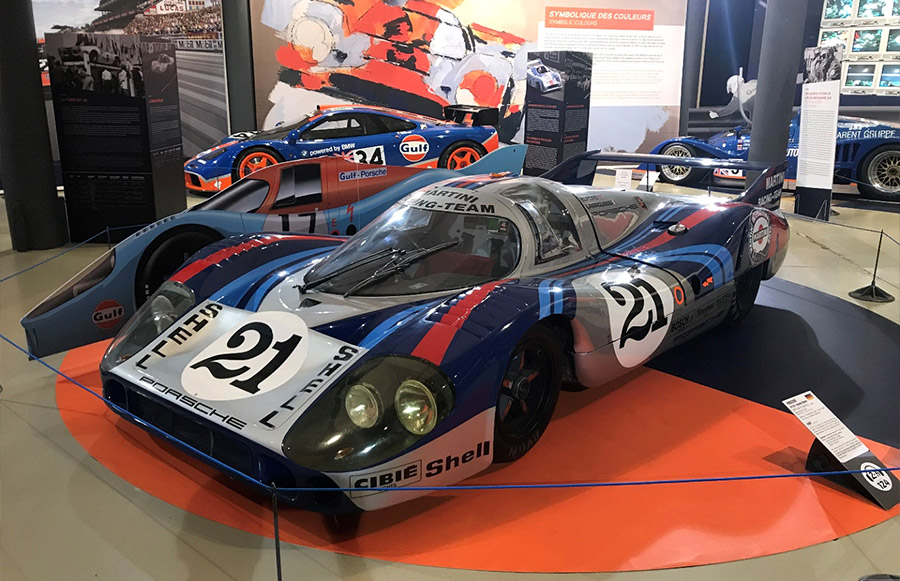 Francis was at the museum in conjunction with a visit to the Porsche Experience Center located nearby. He got a day of lapping in a green Porsche 911 GT3RS which gave a taste of what drivers experience as they thunder down the front straight and up to the Dunlop bridge in the 24-Hour race, just a very short distance away from the Museum celebrating almost a century of others who made the same journey. 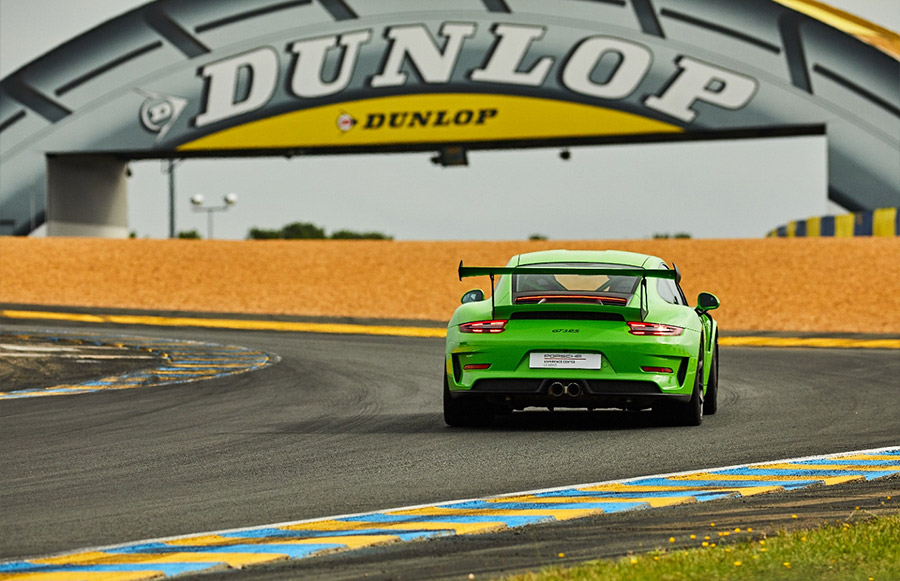 Le Mans history also appreciates the colorful characters that helped to raise the profile of the event. American Briggs Cunningham took the benefits of family wealth to many race tracks around the United States in the 1950s and even became a constructor of cars bearing his name. He took his talents and resources to Le Mans and brought tales of his racing adventures in France back to America. He had the ability to engage his own media coverage to heighten his profile – a novel approach many years before the age of social media or other means of media management. 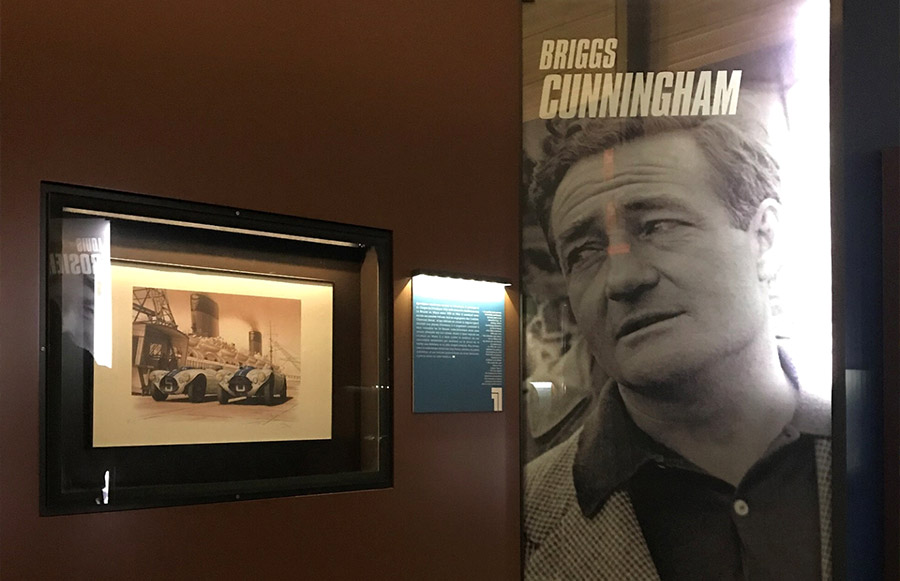 The special display case features artifacts from the very first race in 1923. An original race poster accompanies the trophy from the first race. Historic touches and artifacts help to make the connection to the long history of the race. 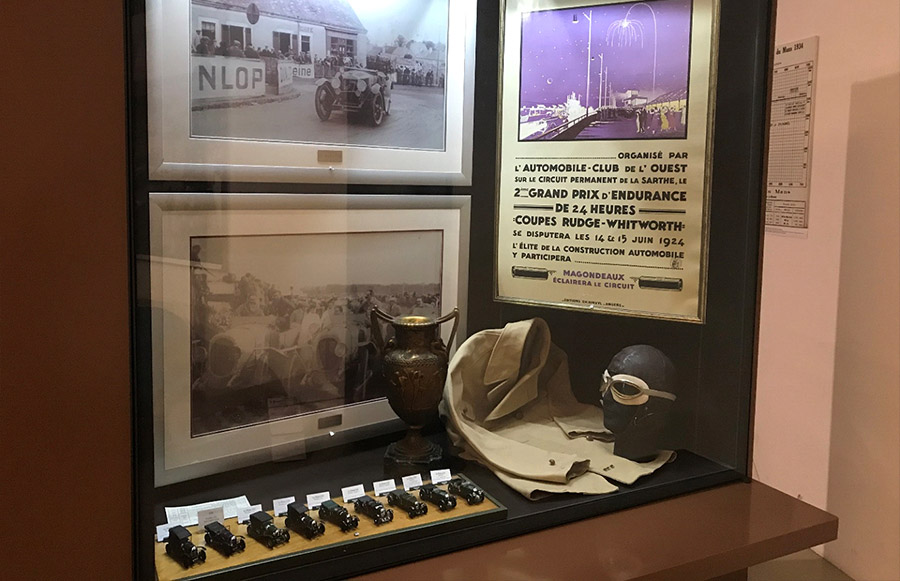 Older cars help to illustrate the history of engineering and aerodynamics. Development progressed quickly as manufacturers tested the limits of endurance and speed. The Le Mans track is known for its long straights and top speeds, so the cars needed to adapt to those needs. 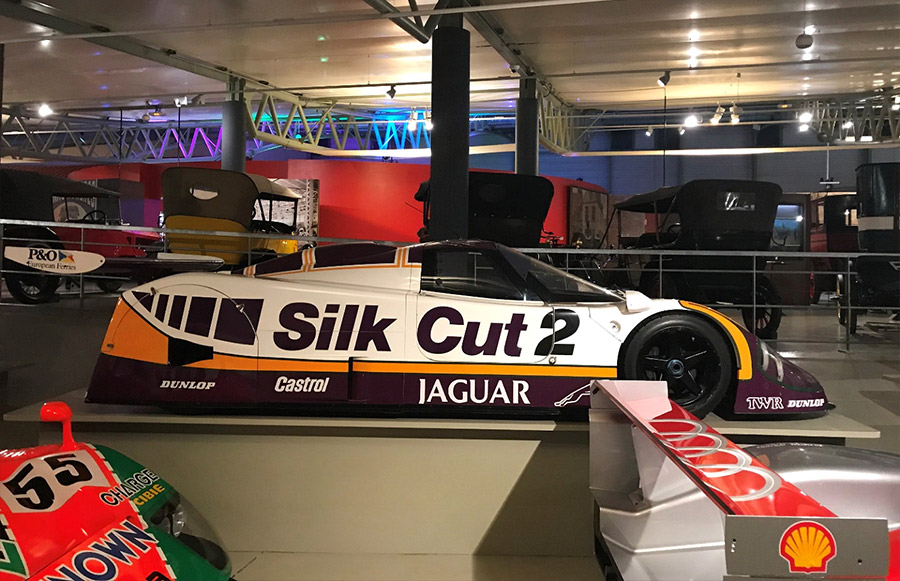 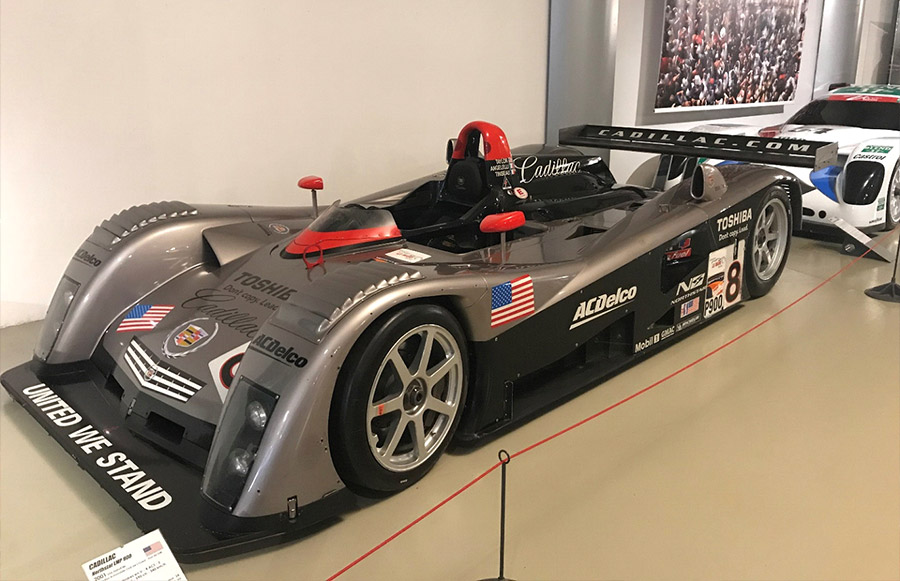 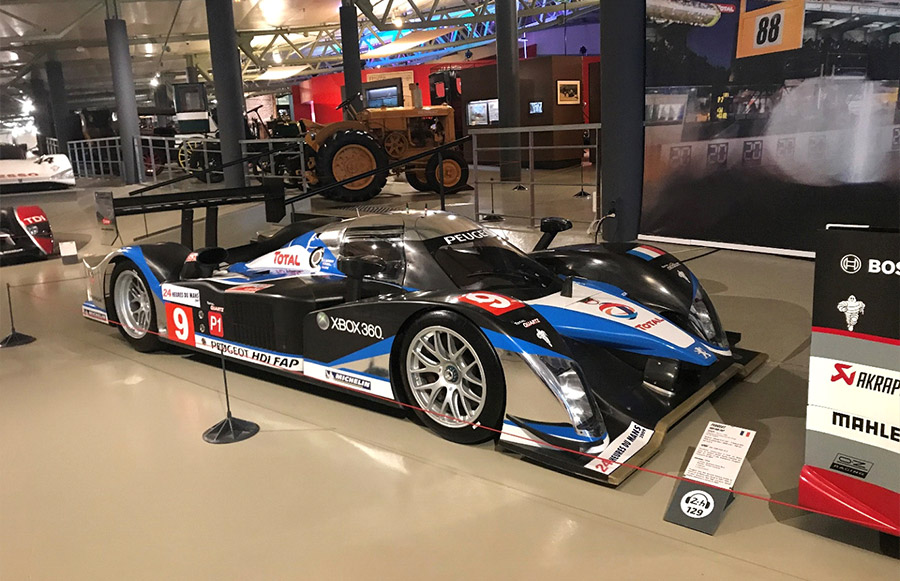 Visitors to the Museum might not have memories of the older cars. They may, however, have seen more recent cars competing in person or via television or the internet. Spaceships from Peugeot, Porsche, Audi and Bentley have benefitted from media coverage in the modern age that has made them more familiar to enthusiasts. Their success in France has heightened the legend of the race while establishing their own place in history. Walking around the Museum and being able to contrast and compare the various approaches to the same question – winning the 24 Hours of Le Mans. 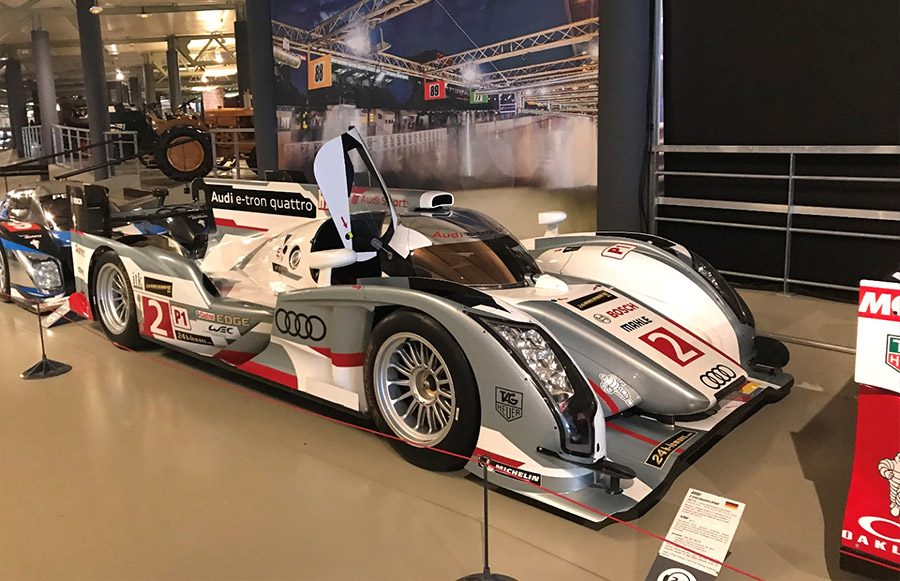 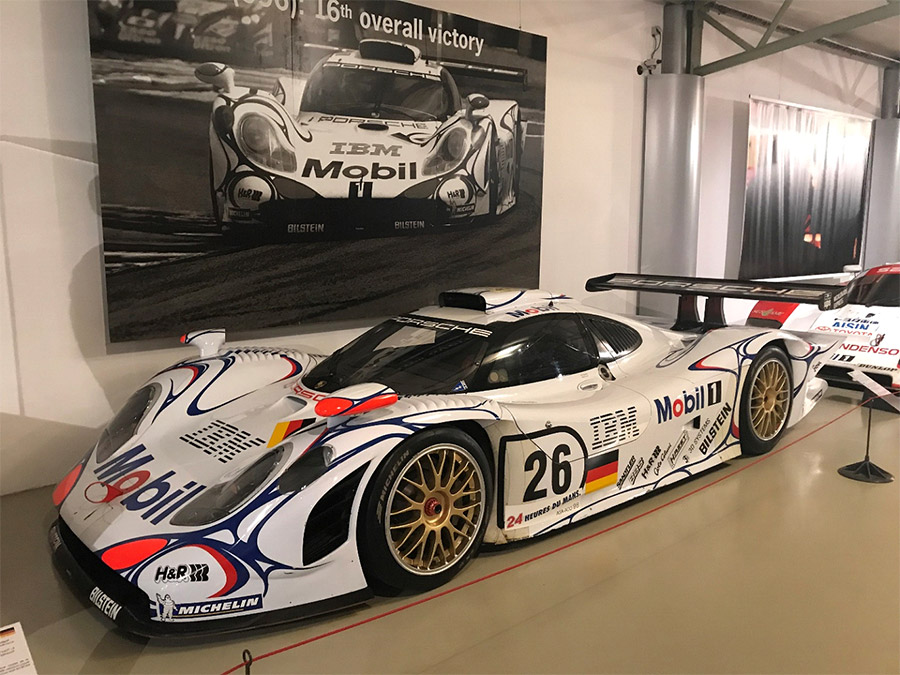 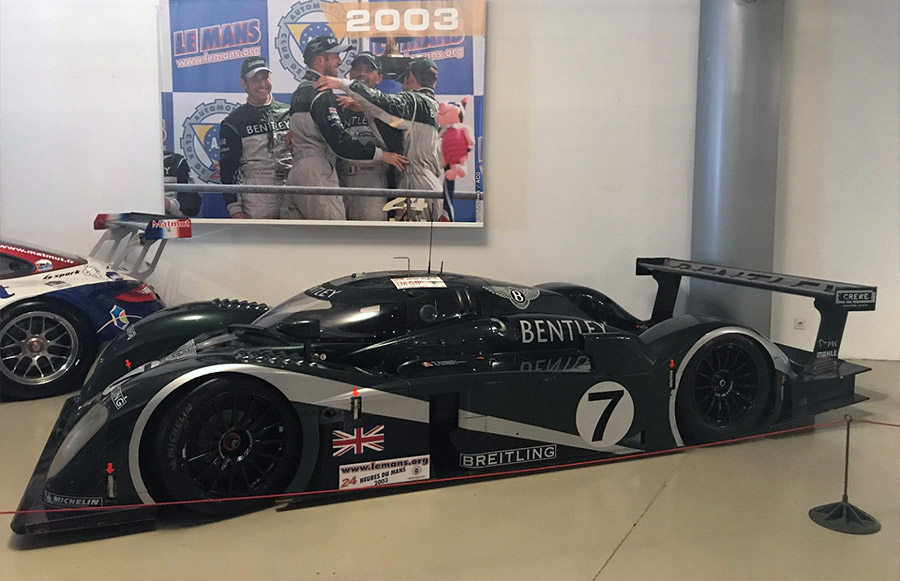 After several hours of taking in the Museum and the exhibits, it was clear that this indeed was a place worthy of a visit. Francis and The Speed Journal was pleased to be able to visit and breathe in the history.