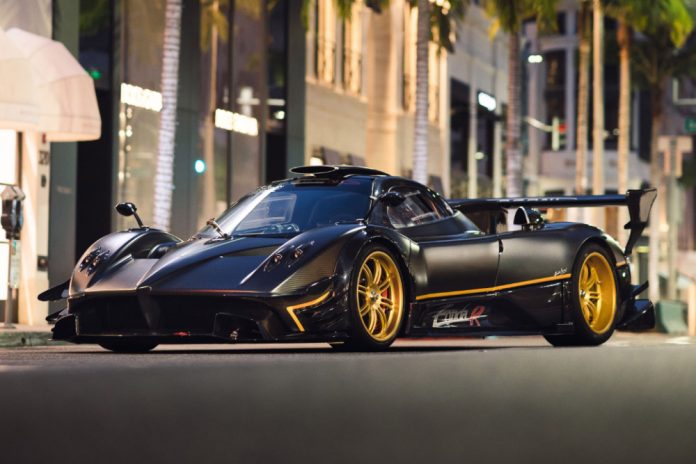 An unprecedented attention to detail and pursuit of perfection resulted in Pagani creating their first car, the Zonda C12, in 1999. Horacio Pagani previously had worked at Lamborghini and was a visionary with carbon fiber construction, recognizing the potential for its use in the car world. After Lamborghini turned down Horacio Pagani’s proposal to invest in carbon fiber technology, the young engineer decided to design a car of his own, the Zonda. The Zonda C12 was finally unveiled at the 1999 Geneva Motor Show, and immediately impressed journalists with its distinctive lines, remarkable performance, and extraordinary build quality—a combination of desirable traits which has since caused the Zonda to achieve mythical status among the most discerning supercar collectors and enthusiasts worldwide.

The Zonda’s lengthy production run of over 20 years is unrivaled in its duration amongst supercar models—yet another testament to Pagani’s exacting and perfectionist approach to product development. In 2007, Pagani introduced their first track-focused model, the Zonda R. As the most fearsome and spartan distillation of the company’s technological capabilities, the Zonda R is truly the marque’s tour de force . Free from race and governmental regulations, the Zonda was designed to be the ultimate driver’s car, offering the ultimate driver experience without any compromise.

The Zonda R’s structure features an advanced iteration of the Zonda F chassis with a carbon-titanium monocoque, a proprietary material developed by Pagani in which titanium and carbon weave are bonded together to benefit from the engineering properties of both materials. The suspension geometry, powertrain, chassis structure, and bodywork were specially developed for the model. All told, the Zonda R’s construction reportedly utilizes just 10 percent of preexisting parts from the marque catalog. In truth, the Zonda R is almost more of a bespoke creation in its own right than it is a road car modified for the track.

Although it was built with ultimate performance in mind, the Zonda R’s body, interior, and engine bay are nothing short of spectacular. Four projector beam lamps peer out above a massive snout flanked by as many diffusers and spoilers as any car will likely ever see. From the rear, the highly adjustable rear wing and quad tailpipes leave little to the imagination. The Zonda R represents a combination of exceptional engineering and artistic design not found elsewhere.

This Zonda R is powered by a naturally aspirated, Mercedes-Benz CLK GTR-derived 6.0-liter V-12 engine producing 800 horsepower. This powerplant is paired with a six-speed sequential transaxle, which features a multi-disc racing clutch and lightweight magnesium casing. The engine is fed fresh air by a roof-mounted, F1-derived carbon fiber intake channel, and exhaust duties are handled by a similarly inspired set of ceramic-coated Inconel 625 headers. With a fantastic power-to-weight ratio and lightning-quick gear changes, the Zonda R sprints to 60 mph in 2.7 second and onward towards a reported top speed over 230 mph. Quite simply, it is truly a track weapon of the most ferocious variety. In fact, the Zonda R still holds the record as the fastest non-series, production-based, gasoline-powered car to lap the legendary Nürburgring Nordschleife—11 years after Pagani factory driver Marc Basseng recorded a time of 6:47:00 in July 2010.

The Zonda R offered here is the fifth of ten examples produced by Pagani between 2009 and 2011.The stunning exterior is rendered in its exposed, woven carbon fiber bodywork with “tricolore” accents throughout. The car was returned to the Pagani factory under previous ownership and upgraded to R Evolution-specification, one of very few to receive such treatment. The R Evolution upgrade includes engine modifications which provide a bump of 50 horsepower over the stock configuration, as well as a new set of lightweight magnesium alloy wheels which mimic the finish and pattern of the originals. Downforce was also increased with the addition of a smaller secondary rear wing underneath the standard wing and the front bodywork was revised with additional dive planes on the front corners. Today, the odometer shows only 1,016 kilometers (~632 miles).

The Zonda R offers its driver an unparalleled driver experience without any compromise. The race-proved V-12 engine is arguably the best-sounding engine of the current era and combined with the exceptional build quality of the car, the Zonda R is unrivaled. Most Zonda Rs are hidden away in private collections, making public appearances of them exceedingly rare. This Zonda R will surely turn heads and be the center of attention for the next owner wherever it goes. Offered for the first time publicly on American soil, this Zonda R Evolution is undoubtedly one of the most impressive cars of its time.

Please note that this lot is sold on a Bill of Sale.