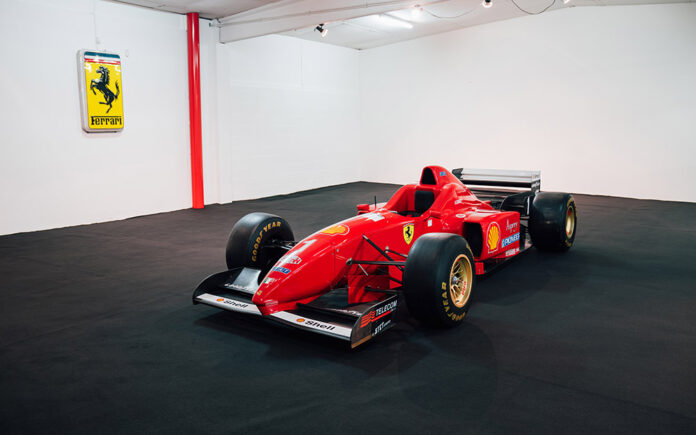 The 1996 Formula 1 season was a time of transition for Scuderia Ferrari. The team had not won a World Drivers’ Championship since Jody Scheckter had triumphed with behind the wheel of a Ferrari 312T in 1979, and their record in the World Constructors’ Championship was not much better, last earned in 1983. A young Michael Schumacher—twice a Formula 1 Driver’s Champion already with Benetton, despite being only 25 years old when recruited by Ferrari—had come on board to drive alongside Eddie Irvine Jr. At the same time, the V-10 powered F310 had been introduced for 1996.

In their first season together in 1996, Irvine and Schumacher drove the F310 to earn Ferrari 2nd place in the Constructors’ Championship. Schumacher took race victories at Grands Prix in France, Portugal, and Spain, while Irvine placed 3rd in his first race in the U.S.A., but his season unfolded with mixed success. This static replica of the F310—which does not include an engine or running gear—faithfully recreates the appearance of the machine driven by Schumacher, on his way to unparalleled success with the team. The show car was on display at the Automobile Museum of Mougins prior to its closing, and—according to a declaration by the former racing driver-turned-Ferrari dealer, Pierre Landereau—was originally supplied by Ferrari.