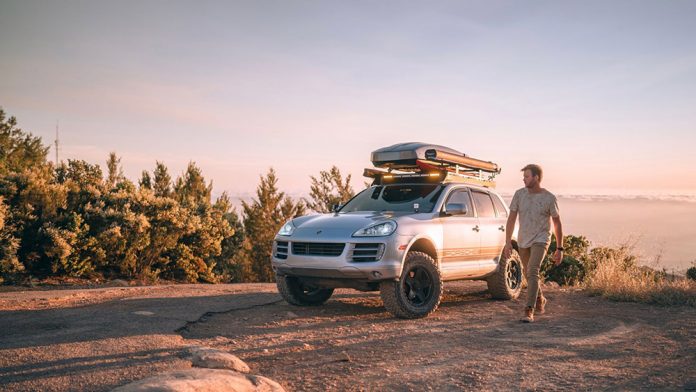 In the spring of 2021, Harrison Schoen made a choice that, on the face of it, might seem like a strange one. After giving up the lease on a rental house in Salt Lake City, he loaded a few belongings into the back of his high-mileage 2008 Porsche Cayenne and started to call it ‘home’.

Born and raised in St Louis, Missouri, Schoen joined the navy at 18, working in a variety of roles and eventually moving to the home of the Pacific Fleet in San Diego. After leaving the military he headed inland, to Utah, and found himself working menial jobs in Salt Lake City to pay the rent. A year and a half later, he decided on a drastic change of direction.

“Being in the navy and living on an aircraft carrier, I learned how to live small. So after getting out, I moved into a two bedroom house and before long I was living in the garage and renting out both bedrooms so that I could live for free. Even then I got tired of things still taking my attention away from just living life.”

“I realised how short life is”

It is 09:00 in Utah, and Schoen is speaking from the cabin of his Cayenne while enjoying breakfast. His original plan had to be to travel abroad, he explains, with Thailand mapped out as his first destination. The COVID pandemic put an abrupt end to his international escape plans, but it also focussed Schoen’s attention on making the best of the here and now. “I realised how short life is,” the 24-year-old says, “and if I had the ability to travel and make a living while on the road, that’s something I should explore while I’m young and able bodied rather than working my whole life, retiring and then trying to enjoy the world.”

It is a philosophy that will strike a chord with many after the last 18 months, and Schoen’s adventure, still less than four months in the making, is already attracting a growing following on social media where regular posts reveal a mixture of romantic escapism and undeniable sacrifice. The Cayenne, although a luxury vehicle in the traditional sense, would not be most people’s first choice for a mobile home, but Schoen spotted one for sale online one night, and bought it first thing the next morning.

A Cayenne S, it had more than 200,000 kilometres on the odometer and Schoen quickly set about modifying it. This included a 3-inch lift kit, tubular upper control arms, new poly-bushed lower front control arms and 18-inch wheels shod in mighty 33 X 12.5-inch off-road tyres. He also added a roof rack to take a storage box, awning and spotlights and removed the rear bumper to increase the car’s departure angle.

One of the other key decisions Schoen made in converting the Cayenne was to rig up a platform inside to sleep on, rather than opt for a roof tent. This was in part because using a roof tent limits drivers to designated campsites, but also because it significantly raises the centre of gravity, a hindrance for serious off-roading.

Driving on the beach in Oregon

Schoen has now been living full time in the Cayenne since May, cooking on a portable stove and washing beneath a roof-mounted road shower. He has driven some of the most challenging trails in the western states and is aiming to visit every National Park in the US and even to reach Alaska, documenting every leg of the journey via social media and YouTube. “My favourite experience so far has been driving on the beach in Oregon,” he says. “I arrived at 06:00 and the whole beach was covered in fog. I’d never driven on a beach before so it was a really magical experience. And it made for some the coolest photos yet of the car!”

Schoen has racked up an impressive 32,000 kilometres in the Cayenne since he bought it in February and at the moment he doesn’t see an end to the adventure. “I’m really enjoying travelling at the moment,” he says. “Some of the reasoning was to do something different from every else in society. The navy prepared me for everything I’m doing now; living in a small space but also the solitude. I don’t get that lonely and I’ve been fortunate enough to make friends all over the country. There’s a great community of people living the ‘van life’. I’m just taking it to the next level because my Porsche allows me to get to places most people can’t reach.”