Sixty-Five Years Later, the Beauty of the Karmann Ghia Endures 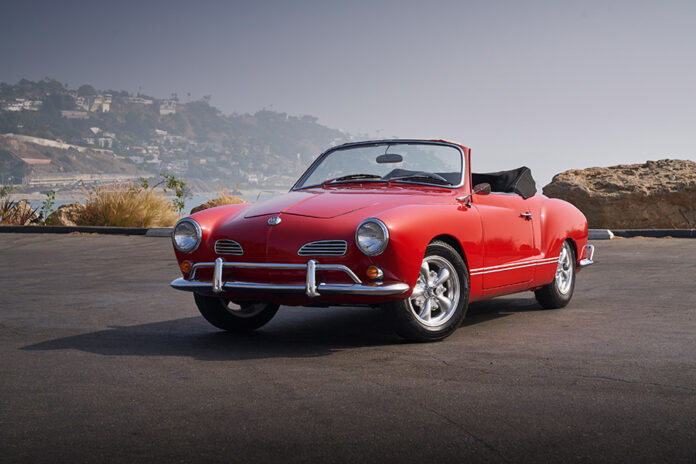 When the Volkswagen Beetle became a hit in America during the ‘50s and ‘60s, it won over buyers for its utility, its frugality and its driving dynamics – not its unusual approach to automobile design. Even Volkswagen ads would later compare it to the Apollo lunar module with the tagline: “It’s ugly but it gets you there.”

It would be 1955 before Volkswagen produced its first truly beautiful car, a coupe whose lines were crafted in Italy and essentially hand built in Germany. And 65 years after the first one rolled out of Karmann’s Osnabruck factory, the Karmann Ghia remains a striking piece of automotive art.

The history of the Karmann Ghia lives in its name. Wilhelm Karmann was a contract car manufacturer, who got his start building convertibles and became the sole supplier of Beetle convertibles from his factory in Osnabruck. In 1953, he asked the Carrozzeria Ghia automotive design house in Turin, Italy, to take the chassis of a Beetle and design a convertible sports car. After four months of secret work, Ghia showed Karmann the result – which by then had turned into a coupe. Karmann shared the prototype with Volkswagen’s Managing Director at the time, Heinrich Nordhoff, and the two agreed to build a production 2+2 seater coupe and convertible.

The prototype Karmann Ghia looked nothing like the Beetle. An elegant nose and front cargo area flowed smoothly into a sizable seating area for two passengers. The thin roof pillars and gracious curves gave the Ghia a sense of motion even at rest, and it has a sporty stance because the body sits seven inches lower than the Beetle. The Beetle engine was stock, but the suspension was altered with a front sway bar and different springs for better handling response. While some of the Karmann Ghia’s lines were inspired by other models, it was clearly its own model – and a striking departure for Volkswagen.

For the production model, Volkswagen added a small pair of chrome vents into the nose, but otherwise kept the concept’s look intact – even though its shapes required many hours of hand-built metalworking. After its reveal in July 1955, production began in August, and the first cars arrived in the United States in 1956. With 36 horsepower and 150 pounds more weight than the stock Beetle, the Karmann Ghia was not a fast vehicle; one magazine was able to reach 60 mph from rest after 28 seconds. It also came at a premium of $900 to the Beetle, but its gracious design made it a hit.

Over the next 19 years, Karmann built 362,601 coupes and 80,881 convertibles, with U.S. sales of nearly 279,000. Through 1974, the Karmann Ghia went through several updates shared with the Beetle line, with power eventually topping out at 60 hp. But its basic outline never changed – a reflection of how on target the original design was. Volkswagen built a second Ghia model, the Type 34, based off the platform of the 1600 sedan, but that vehicle was never officially sold in the United States.

Today, Karmann Ghias are collectors’ items and crowd-pleasers at any car show. Their easy parts availability and graceful lines have made them among the more valuable Volkswagen classics. And the idea of taking a basic platform and modifying it with a unique exterior top-hat is shared with the upcoming ID. electric vehicle family – meaning the electric future could have some of the styling freedom of the past.

Master of the Peaks – ‘Half-track Fox’ Up and Running Again