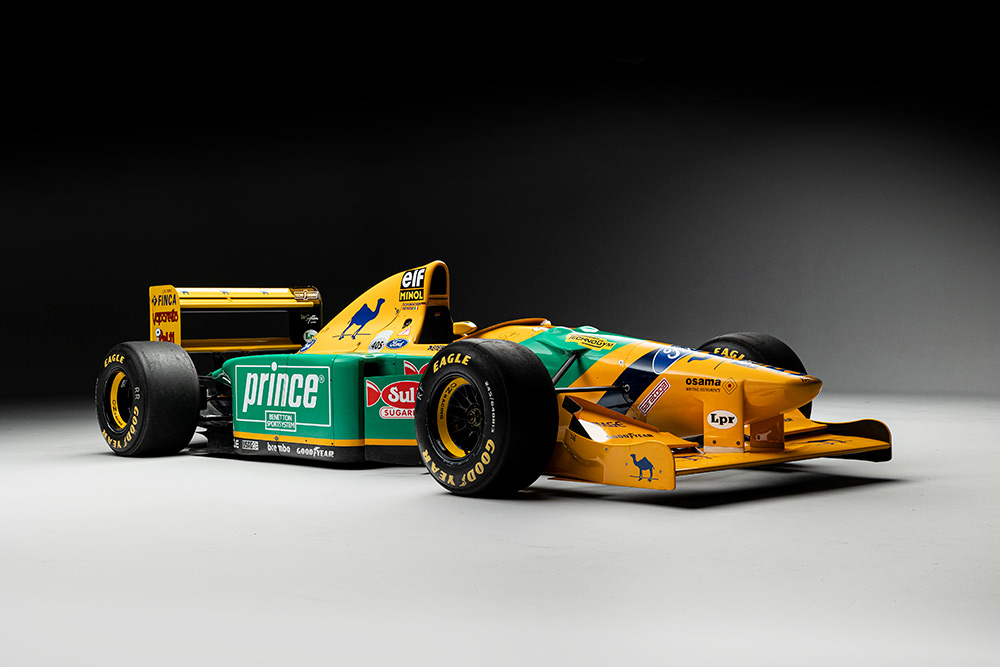 A Formula 1 survivor from the 1990s – a 1993 Benetton-Ford Formula 1 Racing Single-Seater, driven in period by two Grand Prix winning drivers, Riccardo Patrese and the seven-times Formula 1 World Champion Michael Schumacher, is in pole position for the Bonhams Festival of Speed Sale at Goodwood on Friday 24 June.

This rare jewel of the auction saleroom – one of only two Benetton B193B Formula 1 cars running in the world – contested five races in the 1993 Formula 1 season with Patrese at the wheel. The pair achieved their best position – third – at the British Grand Prix, behind race winner Alain Prost’s victorious Williams-Renault FW15C and Michael Schumacher, second, in the sister Benetton-Ford B193B.

Schumacher himself had notably used this Benetton-Ford – chassis B193B-04 – in qualifying for that Grand Prix when he set the third fastest time. The car was extensively tested by both drivers throughout the season.

Designed under the direction of celebrated Formula 1 engineer Ross Brawn, then Benetton’s Technical Director, and Chief Designer Rory Byrne, the B193B was the result of Benetton’s intense period of high-tech development over the preceding winter. In a spirit of ‘can do’ the work embraced automatic gearboxes, active-ride suspension and traction control, all of which featured on the car, assembled around the very first carbon-composite monocoque chassis to be manufactured in the Benetton team’s then brand-new Enstone factory.

Offered from the ownership of a Formula 1 connoisseur and Benetton enthusiast, the Benetton has been painstakingly preserved and prepared and is ready to run in demonstration mode. Its original 3.5-litre naturally aspirated (non-turbocharged) Cosworth Ford HB V8 engine has been slightly de-tuned for practical purposes and reliability. It is also equipped with passive suspension and a Motec electronic management system, rather than the original, for ease of maintenance.

Completing the specification is a choice of advertising and livery ‘suits’ produced for the various international markets, plus the seat mouldings and original seat belts for both drivers – the latter marked with the respective racers’ initials.

The Benetton returns to Goodwood where it has been a welcome and familiar sight, as recently as this year’s Members Meeting, having completed more laps of the motor circuit and more climbs of the renowned Goodwood hill, than almost any other contemporary Formula 1 car. It has an estimate of £1,100,000 – 1,600,000.

Tim Schofield, Head of Department, Bonhams Motor Cars UK, said: “We are thrilled to offer this example of Formula 1 ingenuity created by the masters of the sport. The Benetton still offers sufficient Formula 1 snap, crackle and performance to give a new owner full appreciation of just how capable Grand Prix greats like Schumacher and Patrese really had to be.”