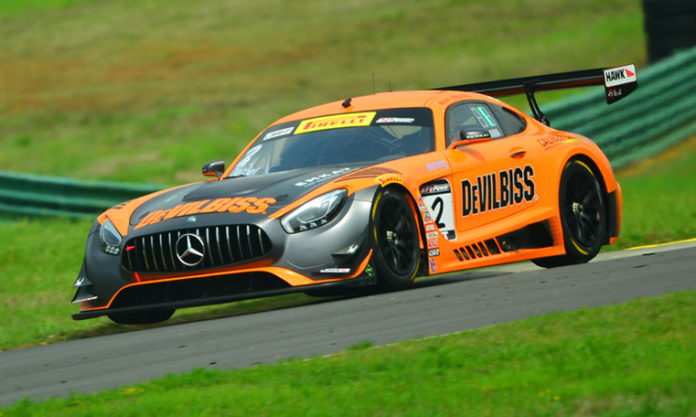 A dominant performance by the Mercedes team of Ryan Dalziel of Scotland and David Morad of Canada highlighted Sunday’s SprintX Round 6 competition at VIRginia International Raceway in the Pirelli World Challenge Nissan Grand Prix of VIR in the 30-car field.

Driving the No. 2 CRP Racing/DeVilbiss Mercedes AMG GT3, the Dalziel/Morad combination led every lap Sunday in the scheduled one-hour SprintX contest with the newcomer Morad putting on a superb showing in his first Pirelli World Challenge event as well as his first race in the Mercedes and at VIR. Dalziel, the veteran sports car star, took over the driving chores at the 33-minute mark and easily held the leading margin to the checkered flag.

The 60-minute, two-driver, one pit stop event was shortened to 58 minutes after a violent crash with former Formula One and IndyCar racer Stefan Johansson, sports car veteran Kris Wilson and GTS competitor Phillip Bloom entering turn seven put out the caution flag with six minutes remaining. All drivers were treated and released at the VIR track medical center. However, the checkered flag was flown for remaining contestants with two minutes left in the one-hour contest due to accident damage to the wall. 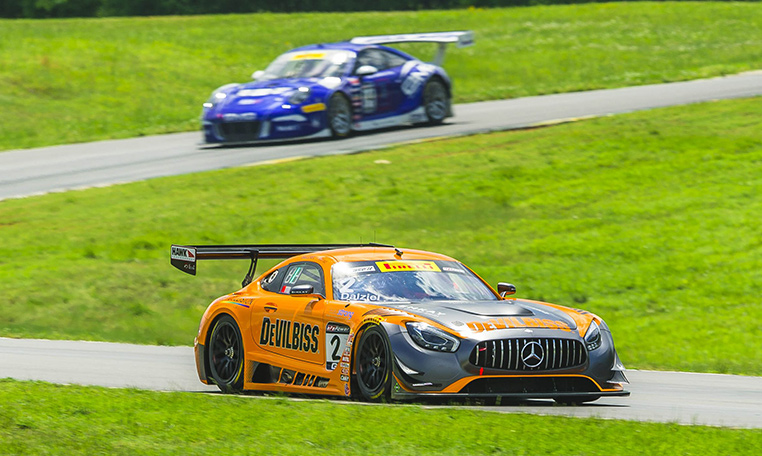 “We knew coming here the Mercedes would be strong,” said Dalziel. “The only variable was how Daniel would adjust to having the engine in the front. It was a big weekend for us, and you’re only as good as your last race so we’ll just enjoy this one. Right now I love the SprintX format, but we need to take a good look at if it helps the package that we have or not. There was a lot of cars here, but I don’t think you can complain when you see where SprintX was last year and where it is now. I’m happy with it right now.”

“I was super pumped coming here,” said Morad. “I grew up watching Ryan (Dalziel) so to be driving with him is great. Having him as my partner is a huge help with the learning curve in sports cars. I was pushing but trying to conserve tires at the same time. It was a little bit of a challenging race, even though it didn’t look like it. I was just trying to mind the gap and the tires and just hanging on until I got the call to hand off to Ryan.”

Placing in the runner-up position Sunday at VIR was the reigning GT champion Alvaro Parente of Portugal and Ben Barnicoat of England in the No. 9 K-PAX Racing McLaren 650S after a come-from-behind drive by both drivers at the 3.27-mile, 17-turn permanent road circuit. Starting sixth, Barnicoat made several impressive passes in his initial VIR appearance, while Parente, a two-time winner already in 2017, moved from third to second late in the feature.

“Yesterday I risked a little bit on turn one and we broke a track rod on the suspension,” said Parente. “That was the end of the race so it was good to turn it around for today. Going into the weekend, I didn’t think we had the optimum pace so I was thinking if we were inside the Top-10 I would be happy. Our team did a good job with the race setup so we did quite a bit better in today’s race and I’m glad we turned it around.”

“This is my first year in sports cars so definitely running with Alvaro (Parente) in Europe helped me a lot in this race in the (United) States,” Barnicoat explained. “I’m learning something from him every day I spend with him. It’s great to have such a good teammate in this point in my sports car career. It was a difficult day yesterday. Today was my second ever start in sports cars so I just tried to stay safe and managed to make the position into fifth place. It was tricky but we got a good pit stop and then Alvaro managed to get us all the way into P2. I absolutely love it here. The tracks really test you as a driver.” 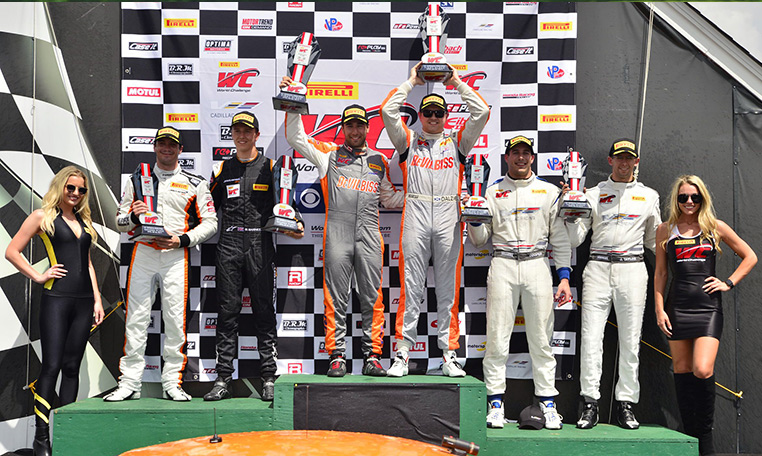 Completing the top-three in SprintX was the pairing of Michael Cooper of Syosset, N.Y., and Jordan Taylor of Orlando, Fla., in the No. 8 Cadillac Racing Cadillac ATS-V.R. sports car.

“We played it safe with the pit lane time so we got jumped by two guys, but (Cooper) was able to jump back from that,” said Taylor, who won the 24 Hours of Daytona and 12 Hours of Sebring with his brother Ricky. “Considering where we came from in practice and qualifying and coming up to third, I think we did pretty good. This was my first race in a GT3 car, so there was a lot to learn with ABS and other electronic systems. SprintX is an interesting format, I like it and look forward to the next one (in Canadian Tire Motorsport Park on May 19-21).”

“We’ve been practicing driver changes since January so we knew what to do, but still it was new for me to do it in a race environment,” said Cooper, a two-time GT winner in 2016. “When you get out there you have to stay calm, do one task at a time and not rush yourself. I think the SprintX concept is pretty cool, bringing in a lot of top talent from worldwide.”

Saturday’s SprintX winners, Daniel Mancinelli and Andrea Montermini both of Italy, drove the No. 31 TR3 Racing/The Collection Ferrari 488 GT3 to fourth Sunday followed by the Magnus Racing duo of Pierre Kaffer of Germany and Spencer Pumpelly of Atlanta, Ga., in the No. 4 Audi R8 LMS.

The overall pole position starting team of Jeroen Bleekemolen of Germany and Tim Pappas of Boston took the Pro-Am title Sunday in the No. 54 Black Swan Racing Mercedes AMG GT3. Bleekemolen also set the fastest lap of the SprintX with a one minute, 44.347 seconds (112.81 miles per hour). 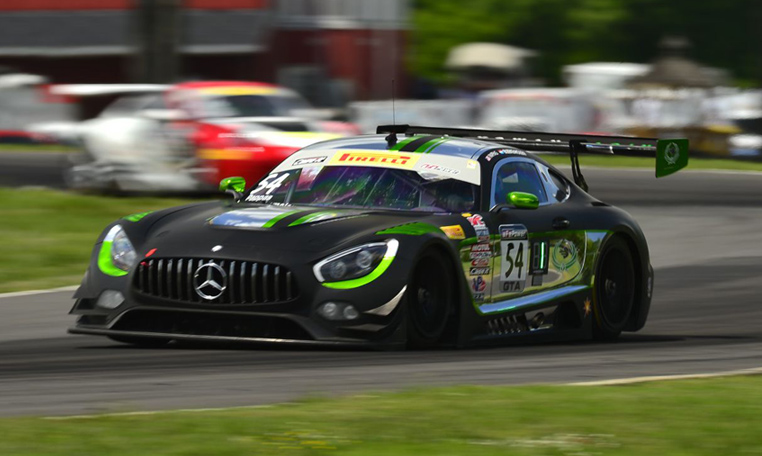 Other drivers scoring SprintX class wins Sunday were Tyler McQuarrie and Henrique Cisneros in the No. 30 MOMO/NGT Motorsports Ferrari 458 GT3 in the GT Am-Am class; Yuki Harata and Allesandro Bressen in the No. 55 Dream Racing Motorsports Lamborghini Huracan in the GT Cup Pro-Am; Joe Toussaint and Cory Friedman in the No. 90 Autometrics Porsche 911 GT Cup in the GT Cup Am-Am; Adam Merzon and Trent Hindman in the No. 017 Case-It Porsche Cayman GT4 Clubsport MR in the GTS Pro-Am; and Aristotle Balogh and Greg Leifooghe in the No. 019 Stephen Cameron Racing Aston Martin Vantage GT4 in the GTS Am-Am.

Mercedes-AMG GT 63 S is the Fastest Luxury Vehicle on the Nürburgring Nordschlei...