The Porsche Success Story at Le Mans in 2017 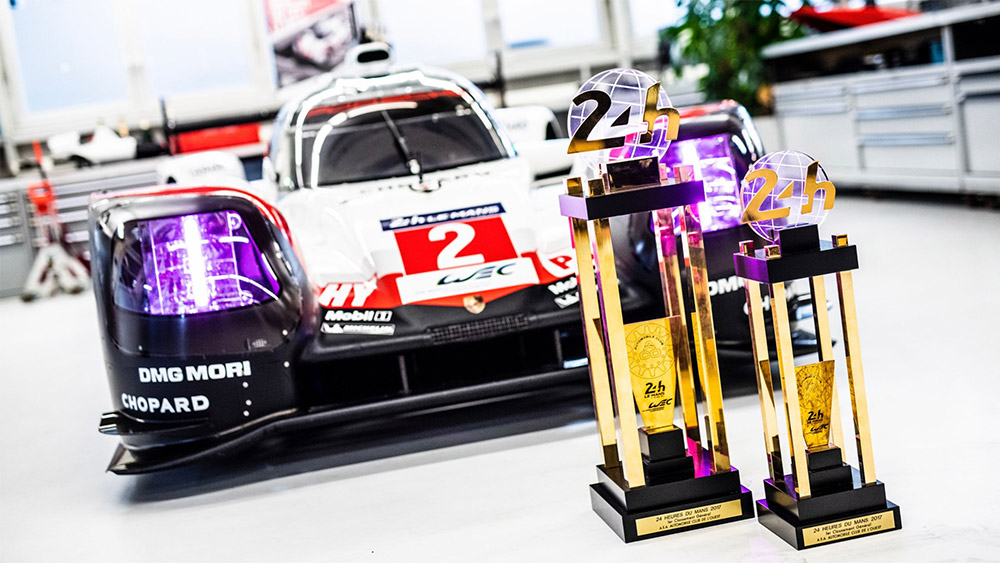 The third Le Mans overall victory in succession was almost impossible to believe for Porsche in 2017. Early on the Saturday evening, the 919 Hybrid with starting number 2 had to be repaired for more than an hour before it could continue the race. After changing the electric machine, the vehicle was in 56th place, and a finish in the leading positions seemed unthinkable at the time. But giving up was not an option. Hours later, the sports car manufacturer made it onto the podium and was able to look back on 108 class victories and 19 overall victories at Le Mans.

70 years after the first class victory, the Porsche Heritage and Museum department is devoting its attention to “The Porsche success story in Le Mans”. In six episodes, the “Porsche Moments” series looks at the world’s most prestigious endurance race with fascinating contemporary witnesses and anecdotes.

In the first and sixth episodes, Le Mans winner Timo Bernhard meets Fritz Enzinger, who led the brand to three overall victories in Le Mans as Vice President Motorsport. Walter Röhrl, Hans-Joachim Stuck and Norbert Singer give insights into what happened behind the scenes in four other episodes. The final episode is all about the exciting chase to catch up in Le Mans in 2017. “The 919 Hybrid stands for the Porsche legend at Le Mans in the modern era like no other vehicle. Porsche achieved three overall victories with this hybrid race car in the years 2015, 2016 and 2017. The third World Endurance Championship title followed a few months after the overall victory, as did the hat trick in the Drivers’ World Championship. It is not possible to achieve more than that,” summarises Achim Stejskal, Head of Porsche Heritage and Museum.

The grand finale of “Porsche Moments”

Host Timo Bernhard introduces the grand finale of “Porsche Moments” on the test site of the Weissach Development Centre. There he meets up with the vehicle that he says “brings back many memories of an incredibly wonderful time” and gets behind the wheel to drive a few laps – four years after the unforgettable victory in France with his team mates Earl Bamber and Brendon Hartley. “It drives like before and the drizzle is also like in Le Mans,” says Fritz Enzinger.

The two men are linked by joint victories and also by the exciting development period of the vehicle. “The 919 Hybrid is the most complex and innovative race car that Porsche has ever built,” summarises Timo Bernhard. Enzinger came to Weissach in November 2011 to return the brand to the top category of Le Mans prototypes three years later. “Ten years ago, all I had was the proverbial blank sheet of paper,” explains the 65-year-old Austrian. For him, the first step was to hire the right people and build a team. “Development of the 919 Hybrid only began after the announcement of the regulations in June 2012. That was a great opportunity for me. The structure and concept had been in our heads for a long time, so we only needed the right employees to develop the right team spirit,” says Enzinger, who finally assembled a team of specialists from 21 nations. “The necessary spirit was created together. Our big common goal was a place on the podium.”

“You have an opportunity like that only once in your life”

Timo Bernhard also looks back fondly on this time: “As a driver, being involved right from the start was something very special. You have an opportunity like that only once in your life. I already felt your determination and immediately trusted you when we first met, Fritz.” He also remembers the 16 winning posters from Le Mans that decorated the walls on the way to Enzinger’s office. At the end, there was a blank sheet of paper in a frame. A symbol for the team’s common goal.

On 18 June 2017, the car with the number 2 crossed the finish line after a dramatic race in front of almost 260,000 fans. This sealed the brand’s 19th overall victory in Le Mans. The record of the 919 Hybrid, which was fundamentally revamped during the period from 2014 to 2017: 20 pole positions, 17 victories, 13 fastest race laps and six World Championship titles. “The car is so complex, the rear axle is driven by a two-litre V4 combustion engine that produces almost 500 PS. The electric motor can additionally deliver more than 400 PS to the front axle on demand,” explains Enzinger. The 919 Hybrid was considered to be the fastest test laboratory and the most innovative race car that Porsche had built up to this time.

“Our most dominant victory with the 919 Hybrid was in 2015. The entire Executive Board was there, as was the Porsche family, and everyone was in the pit together – there can’t be a better team picture than that,” says Enzinger and looks at photos that Timo Bernhard has spread out in the historic motorsport workshop of the Weissach Development Centre. “The most nerve-wracking victory was in the 2017 season,” he adds. Porsche competed then with a significantly enhanced vehicle. After the repair work on Saturday evening, the leading car was 18 laps in front – Porsche started the chase to catch up. The team regained the lead on lap 347 and was rewarded in the end with the 19th overall victory. “In the last lap, I thought of the many steps that made this success possible for me,” reveals Timo Bernhard, who had always dreamt of a triumph with Porsche in Le Mans. It was the first time he cried after winning a race.