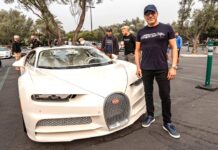 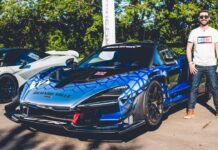 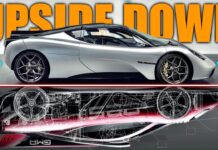 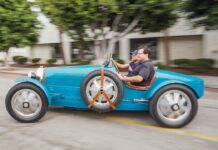 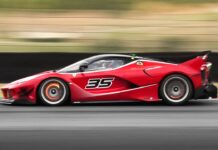 This video is about a fantastic 1992 Peugeot 905 Evo 1 Bis, chassis EV16, my friend Italiansupercarvideo and I saw and recorded during both the 2019 and 2020 editions of the Dix Mille Tours by Peter Auto at Circuit Paul Ricard. In recent years the car has been restored and prepared for racing by French specialists Equipe Europe, who were so kind and available to let us put a GoPro and a portable recorded (for a better audio quality) to have some footage from the first free practice session of the 2020 Dix Mille Tours with Erik Maris behind the wheel. EV16 finished third at Le Mans 1992, driven by Philippe Alliot, Mauro Baldi and Jean-Pierre Jabouille, and it achieved two victories in the World Sportscar Championship at Donington and Magny-Cours rounds, driven by Philippe Alliot and Mauro Baldi.

The next time I’ll have the chance to put my action camera inside a Group C car I should remember to avoid fixing it on the rear bulkhead of the cockpit because in these ‘3-5-litre era’ prototypes the engine creates too many microvibrations (being almost linked to that part of the car) and even the HyperSmooth image stabilizer of the Hero 7 couldn’t do much…
I edit this video using mostly the scenes took a couple of weeks ago but also something I recorded in October 2019 (cloudy scenes and some shots of the warm up).
——————————————————————————–
Following the new rules introduced by FIA in order to limit the extreme performance of turbocharged C1 cars built to the original rules, Group C saw the beginning of the “3.5-litre” era. Peugeot seized the opportunity and started working on the new car, called 905. It was unveiled in February 1990 and was developed throughout that year before making its race debut in the final two races of the season.

Peugeot decided to develop a V10 engine, called SA35. Conceptually it was compliant with the Formula 1 regulation of the time and, with little modifications, it was used on the 1994 McLaren MP4/9 F1 but with disappointing results. It was able to produce 620hp for endurance races or 680hp at 12,500 rpm during sprint races. The chassis and aerodynamic were built in collaboration with the French aeronautical company Dassault Aviation.

In the early part of the ’91 season the 905 suffered some performance and reliability problems but, more crucially for Peugeot, the car was a lot slower than the Jaguar XJR-14. It managed to achieve a lucky win in Suzuka but at the 24h of Le Mans both cars entered didn’t finish the race. In the remaining races of the championship a heavily revised 905, was introduced, called Evolution 1 Bis. With the exception of the carbon fiber monocoque chassis, Peugeot made changes to the whole car focusing mainly on aerodynamics. Now a separate wing could be bolted onto the nose for high-downforce tracks. It scored convincing results and wins, finishing second in the championship standings behind Jaguar, but ahead of defending champions Sauber Mercedes.

Peugeot’s main rivals both retired from the World Sportscar Championship, and in 1992 the 905 EV1B became one of only two factory efforts involved alongside the Toyota TS010. In addition, from that year only the new “3.5-litre” Group C cars could race in the WSC so that meant the Porsche 962s and Jaguar XJR-12s, highly used by private teams, were no longer allowed to run, with the exception of the Le Mans race. Peugeot won the 1992 WSC championship and the 24 Hours too (1st and 3rd place).
Before it was annunced the cancellation of the 1993 championship, Peugeot had already started developing a new 905, called Evolution 2, but it was never raced. Although there was no World Championship, there was a 24 Hours of Le Mans where Peugeot scored an amazing 1-2-3 victory.