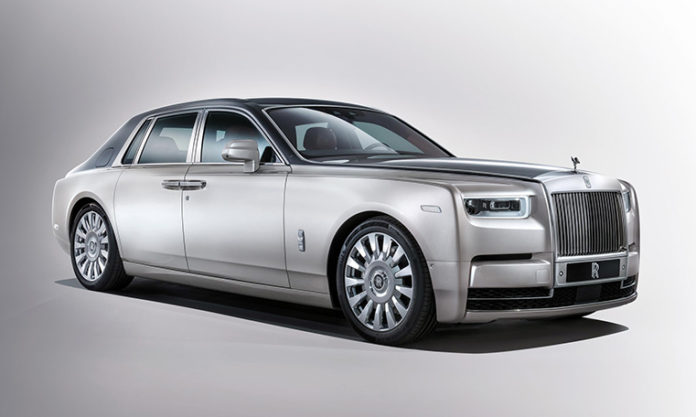 A new benchmark has been set as the New Rolls-Royce Phantom – the eighth generation of this great nameplate – arrives. Not satisfied with simply launching a motor car that is a wholly contemporary design interpretation of Phantom DNA and a technological tour de force, Rolls-Royce has revolutionised the luxury car industry itself by shifting away from the status quo of shared platforms to an entirely new luxury business model.

As the next chapter in the Rolls-Royce story opens, the New Rolls-Royce Phantom points the way forward for the global luxury industry. 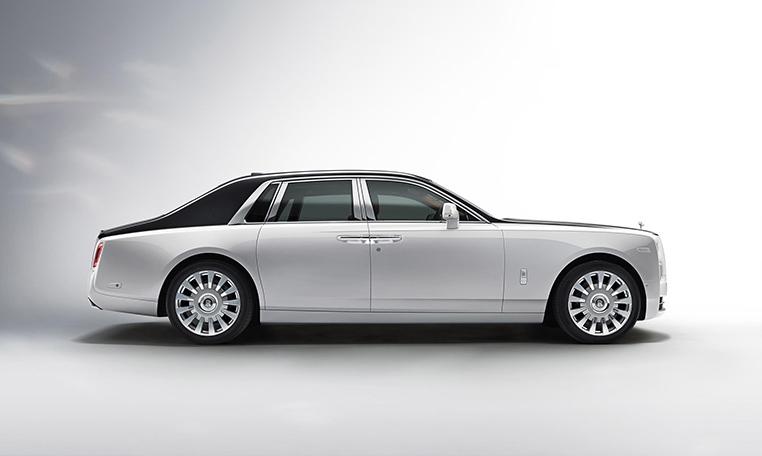 The Genesis of New Phantom

Quite contrary to how other so-called luxury manufacturers are trying to realise economies of scale by sharing platforms with mass market manufacturers, Rolls-Royce concluded that the future of true luxury lies in true small-volume manufacture of a dedicated ‘Architecture of Luxury’.

“Key to Rolls-Royce realising its vision of being the world’s leading luxury brand, today and in the future, is an architecture that spans the entire Rolls-Royce family,” comments Philip Koehn, Director of Engineering. “The Architecture of Luxury will carry every future Rolls-Royce, not just the New Phantom. Project Cullinan and eventually the next Ghost, Wraith, Dawn will ride on this architecture, as well as future coachbuild projects.” 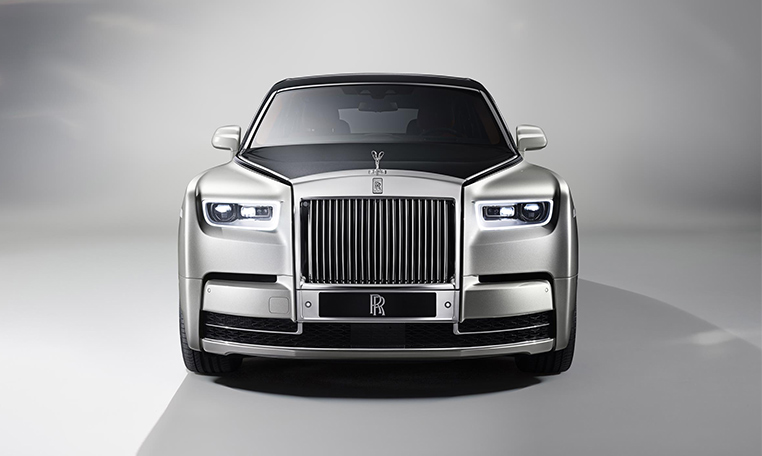 What is the Architecture of Luxury?

It is a truly revolutionary approach for the motor industry, and one that is informed by Rolls-Royce’s standing as a luxury house in the business of cars. Whilst the majority of so-called luxury manufacturers are limited to sharing individual platforms in a specific sector with mass brands for say their SUV or GT offerings, thereby introducing unacceptable compromise, Rolls-Royce will be uncompromising in only using its own architecture across all its motor cars, whatever the sector. 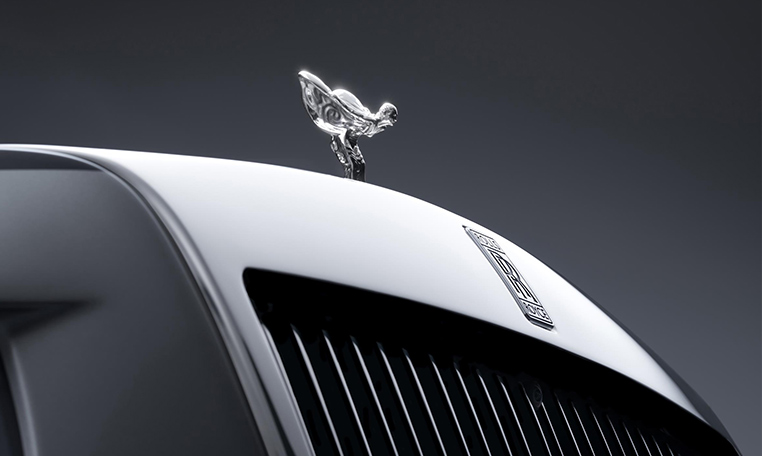 The New Phantom will be the first of a new generation of Rolls-Royces to benefit from the creation of the Architecture of Luxury. This new architecture serves as the foundation on which this eighth generation of Phantom reaffirms its position as ‘The Best Car in the World’ by taking the best fundamentals and making them better.

The first major benefit of the new architecture for the New Phantom are lightness, increased stiffness, efficient production of standard and extended wheelbase bodies and uncompromised exterior surface design. 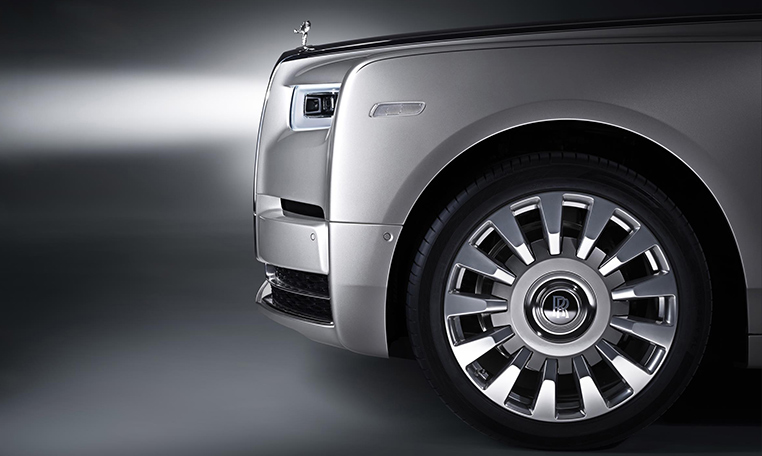 A new double-wishbone front axle and 5-link rear axle deliver astounding levels of control over lateral roll and shear forces and delivering incredible agility and stability, as does the addition of four-wheel steering, all contributing to an undisturbed passenger whatever the driving conditions.

Rolls-Royce’s celebrated Magic Carpet Ride also improves as a result of the new lighter architecture, and the latest generation of self-levelling air suspension. The suspension makes millions of calculations every second as it continuously varies the electronically controlled shock absorber adjustment system – reacting to body and wheel acceleration, steering inputs and camera information. In addition, the Flagbearer – evocative of those men who were required by law to carry a red flag ahead of early motor cars – adds a stereo camera system integrated in the windscreen to see the road ahead, adjusting suspension proactively rather than reactively up to 100km/h. 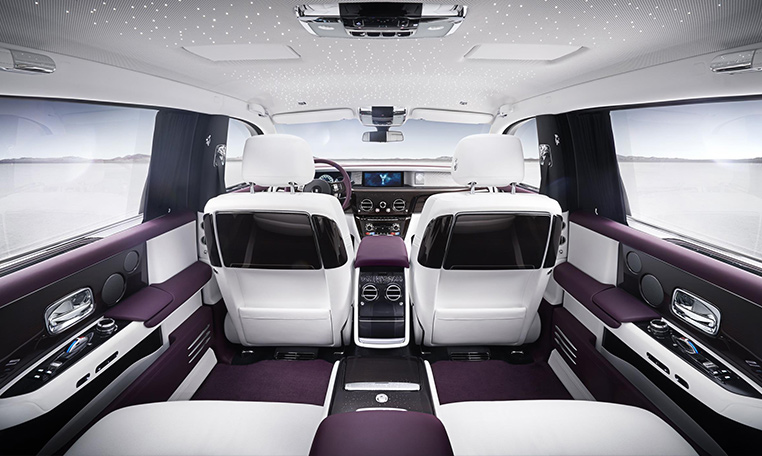 The most silent motor car in the world

Incalculable effort was expended to create ‘the most silent motor car in the world’ including 6mm two-layer glazing all around the car, more than 130kg of sound insulation, the largest ever cast aluminium joints in a body-in-white for better sound insulation, and use of high absorption materials.

All in all it is a perfect 360° cocooning effect in a motor car that is approximately 10 per cent quieter than its predecessor at 100km/h. Indeed, when Rolls-Royce’s acoustic test engineer first reviewed results road and vibration tests, the sound levels were so low they had to check their instruments were calibrated correctly. 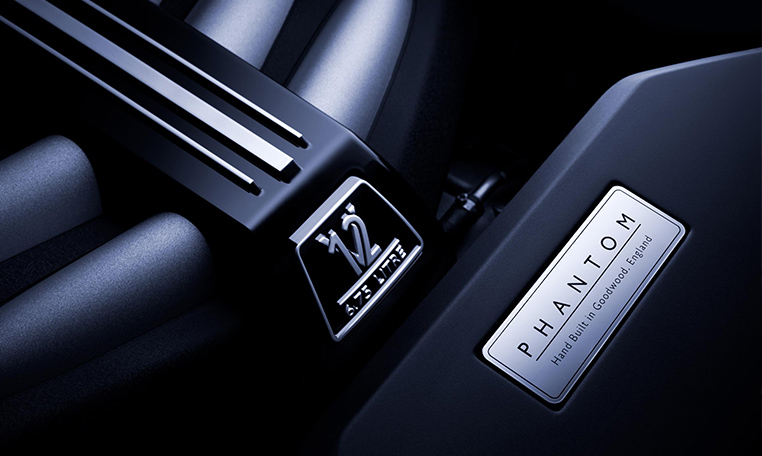 The heart of a Rolls-Royce – the magnificent V12 reinvented

The new V12 Phantom engine employs two turbo chargers that contribute to a low-end torque output of 900Nm at an incredibly low 1,700rpm whilst also delivering 563bhp or 420kW of power, resulting in calm low speed progress associated with state occasions and an unfussed surge of power when one needs to press on. The addition of Satellite Aided Transmission (SAT), married to a ZF 8-Speed gearbox also ensures that the driver is prepared for whatever the road has in store for them. 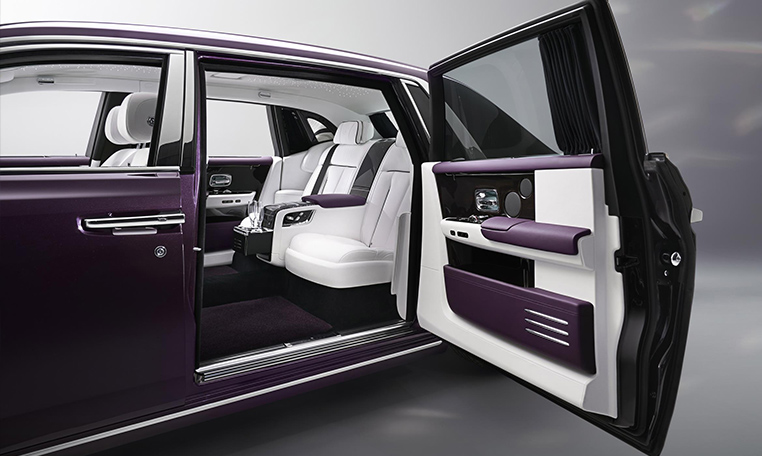 The most technologically advanced Rolls-Royce ever

Another benchmark, the Electronic Architecture of the New Phantom is the largest ever component produced by the BMW Group, let alone Rolls-Royce, helping to make New Phantom the most technologically advanced Rolls-Royce ever. 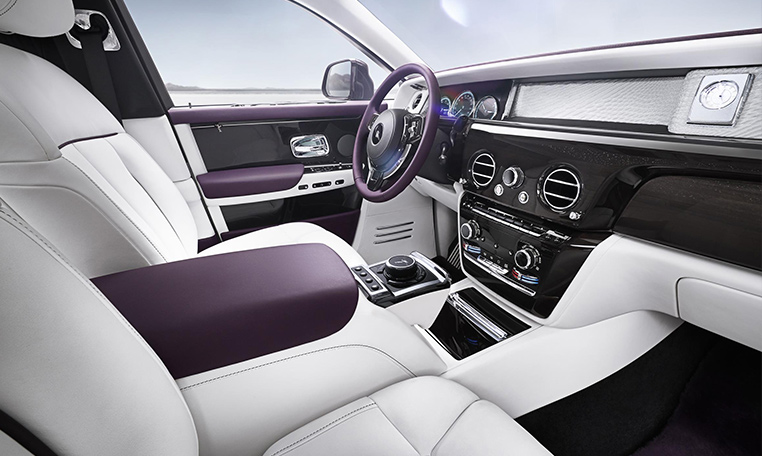 ‘The Gallery’ – an unprecedented new concept in luxury

At the heart of the New Phantom’s wholly modern design aesthetic is ‘The Gallery’, a wholly contemporary and luxury reinterpretation of a motor car’s dashboard and instrument panel area.

While the character of the monolithic, upright dashboard pays contemporary homage to Rolls-Royce models of the past, with one clean, symmetrical surface, the main fascia veneer takes the eye from the lower centre up and outwards to create a sense of width.

All of the elements within ‘The Gallery’ are enclosed in an uninterrupted swathe of toughened glass that runs the full width of the dash area. Within it, the instrument digital dials are framed with chrome, adding a degree of jewellery and continuity throughout the front of the interior. 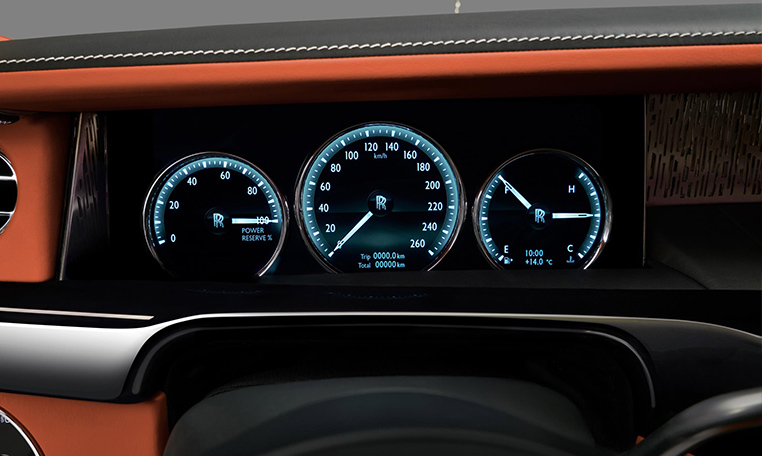 Behind the physical chrome surrounds of the instrument dials, Rolls-Royce has embraced a more futuristic approach to clearer instruments for the driver, something requested by Rolls-Royce customers around the world. 12.3 inch TFT colour displays with LED backlighting now communicate all driver information from within the round chrome surrounds, with the displays themselves designed with clear and beautiful virtual needles, Rolls-Royce jewellery-like chaplets and clear lettering. 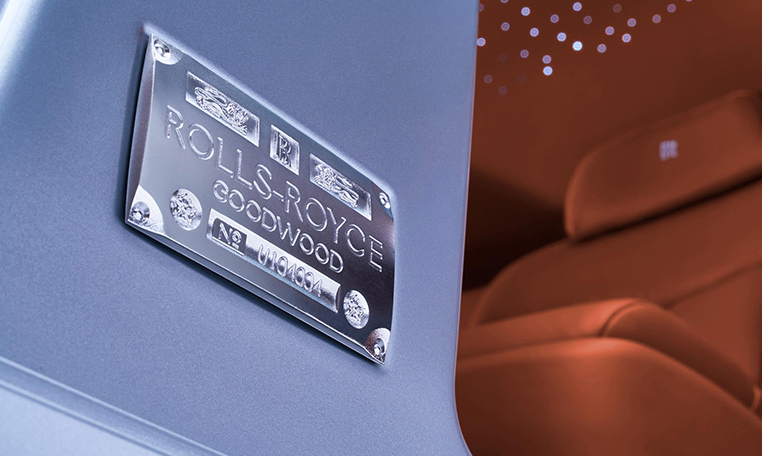 Also behind the glass of ‘The Gallery’ are housed the analogue clock – a nod the fact that it is “the loudest sound you can hear in a Rolls-Royce …” and the central information screen which can be retracted behind the centre stack when not in use.

The standard clock features a dark face and the surround is finished in black leather. However, each Bespoke Clock features a more intricate design, including a lighter backlit face with crystal effect details and counterweighted hands, and is finished to match the material selected within ‘The Gallery’.