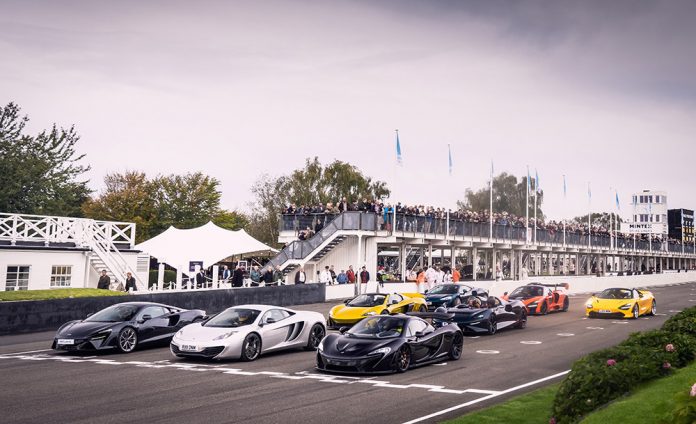 Supercars and hypercars spanning 10 years of road car success for McLaren Automotive took to the track at the Goodwood Motor Circuit in the UK, on Saturday 16 and Sunday 17 October, to open the 78th Goodwood Members’ Meeting.

Led by the first production 12C – the car that marked the arrival in 2011 of McLaren Automotive in the modern era – some of the most memorable high-performance, luxury cars launched in the past decade celebrated McLaren’s achievements with laps of the Goodwood circuit.

Lining up alongside the 12C were a McLaren P1™ – the world’s first hybrid hypercar – the extreme, track-focused McLaren Senna, a GT, two convertibles – a 675LT Spider and 720S Spider – and the most recent McLaren Ultimate model, the Elva. Completing the celebration parade was McLaren’s all-new, high-performance hybrid supercar, the Artura.

The dynamic display was the centrepiece of activities at the Goodwood Members’ Meeting that saw McLaren customers joining the 10-year celebrations, which also featured McLaren road cars on track as course cars and safety cars.

“There is much for McLaren Automotive to celebrate as we open our second decade. We continue to build on the McLaren history, while pioneering new technologies and fully embracing electrification – and what better way to celebrate than with our cars on a famous race circuit and McLaren owners joining us to enjoy the experience. McLaren founder Bruce McLaren famously spoke of life being measured in achievement not years alone, and while our 10-year anniversary is a milestone in its own right, it’s the astonishing cars we have created since 2011 of which we are most proud.” – Mike Flewitt, Chief Executive Officer, McLaren Automotive.

McLaren’s road car heritage dates back to 1969, when Bruce McLaren designed and manufactured the futuristic-looking M6GT. His untimely death in a testing accident in 1970 at the Goodwood circuit paused McLaren ambitions in this direction, but clear opportunities outside motor racing remained. This was confirmed in 1993 with the arrival of the F1 – a car that rewrote the rulebook with its carbon fibre monocoque and central driving position – but it was in 2009 that a new era was announced with an all-new supercar, the 12C.

Deliveries of the car began in 2011, the new McLaren Production Centre in Woking, Surrey, UK, where the supercar – and all future McLaren road cars – would be hand-assembled, having been officially opened in the autumn. McLaren Automotive was now fully equipped to achieve its production ambitions and the next decade beckoned.

The anniversary celebrations at the Goodwood Members’ Meeting follow two similar activities in September – at Silverstone Circuit in the UK and the Autódromo Internacional do Algarve circuit in Portugal.

In addition to cavalcades of luxury supercars from the last 10 years, these events also featured rare customer-owned track cars including the McLaren Senna GTR, McLaren P1TM GTR and McLaren Customer Racing’s 720S GT3X – a GT3 race car unrestricted by the competition rulebook. The event in Portugal also included three rounds of the Pure McLaren GT Series, which has introduced many McLaren owners to GT racing.

In November another Pure McLaren Festival will take place, at the Circuit of the Americas in Texas, United States. This will feature the final three rounds of the 2021 Pure McLaren GT Series and many more McLaren Automotive cars on track at the home of the US Grand Prix.

The 2021 range of McLaren road cars comprises the GT; two supercars – the McLaren Artura and the 720S (plus the more extreme 765LT) and the Elva. Further information about these models – and many of the heritage cars – can be found at https://cars.mclaren.com/.