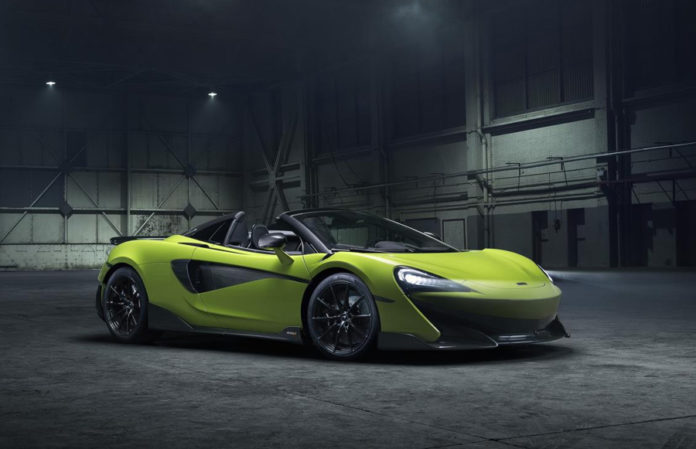 McLaren Automotive today releases first images and details of the third new model in its £1.2bn Track25 business plan – the McLaren 600LT Spider. The fifth car to carry the Longtail name, the new convertible fully embodies the McLaren Longtail philosophy of increased power, reduced weight, optimized aerodynamics, track-focused dynamics and limited availability. In addition, it brings a new dimension of excitement over the 600LT Coupé, without compromise to the dynamic purity of the most performance-focused car in the Sports Series line-up: a retractable hardtop to give the choice of open-air driving. 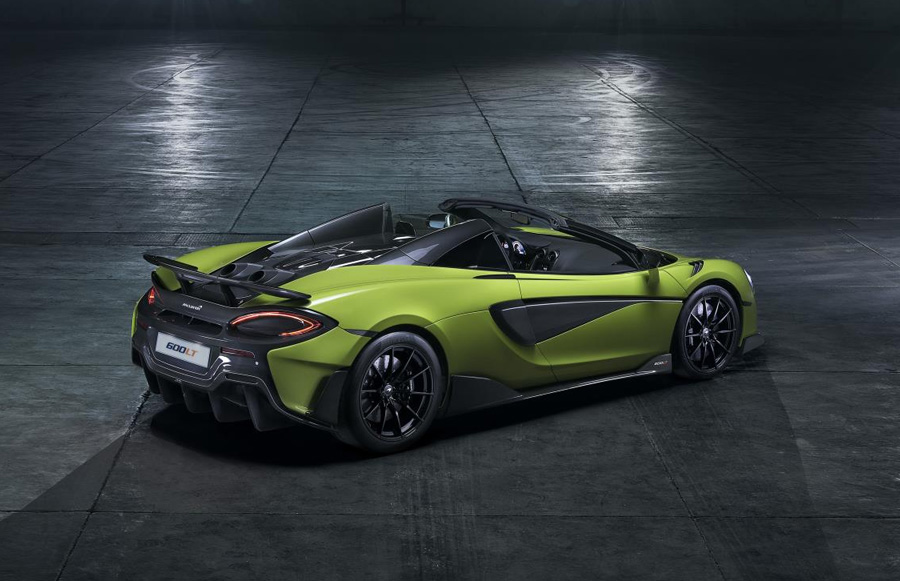 “The McLaren 600LT Spider adds a new dimension of excitement to the most extreme model in the Sports Series family, while losing none of the Longtail focus. Taking full advantage of the strength of the carbon fibre MonoCell II chassis has ensured that the new Spider has dynamic abilities and performance on par with the 600LT Coupé, for a weight premium of just 110.2lbs and with no additional structural strengthening required. In addition to our weight advantage over competitors, we have also retained the top-exit exhausts that debuted on the Coupé – and I’m pleased to report that they sound and look even better with the roof or rear window of the Spider lowered!” – Mike Flewitt, Chief Executive Officer, McLaren Automotive 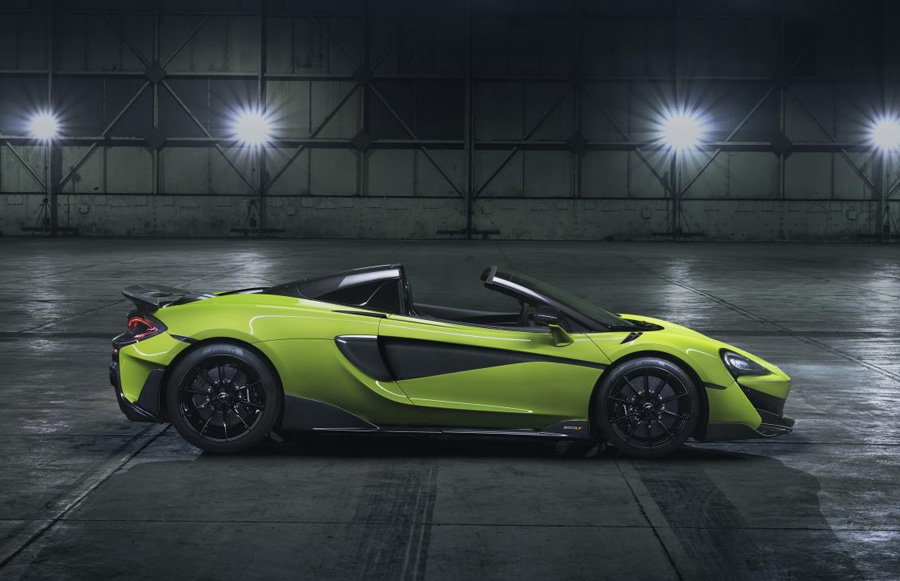 Like its 600LT Coupé sibling, the Spider records a significant weight saving over the model on which it is based, with McLaren’s engineers achieving a reduction of 220.5lbs* at DIN weight over the 570S Spider. Furthermore, thanks to its lightweight but incredibly strong carbon fibre MonoCell II chassis, the convertible 600LT retains the structural rigidity of the Coupé with none of the strengthening that is usually required with conventional steel or aluminum structures. The result is a weight penalty of only 110.2lbs over the Coupé, which contributes to a lightest dry weight of just 2,859.4lbs for the Spider. This is at least 176.4lbs less than any direct competitor and the equivalent power-to-weight ratio of 457bhp-per-ton underpins astonishing levels of performance and dynamic prowess. 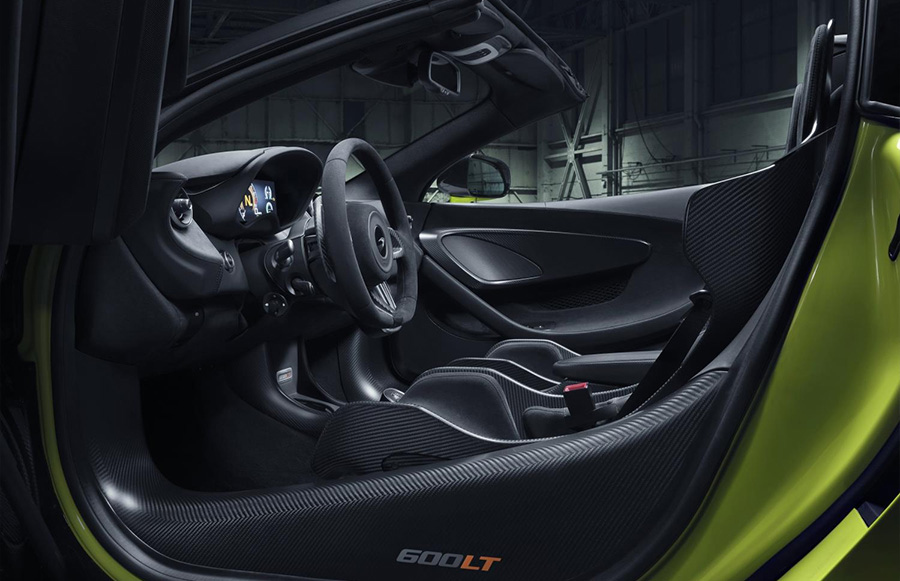 Enhancing the Sports Series Longtail experience with open-air motoring is as easy as pushing a button to lower or raise the three-piece, powered retractable hardtop roof at speeds of up to 25mph. With the roof lowered, occupants benefit not only from wind in their hair, but also the memorable aural and visual drama provided by the top-exit exhausts that are unique to the 600LT.  An electrically-operated, glazed wind deflector can be activated independently of the hardtop, to reduce buffeting or increase ventilation – or simply to allow more of the exhaust sound into the cabin. 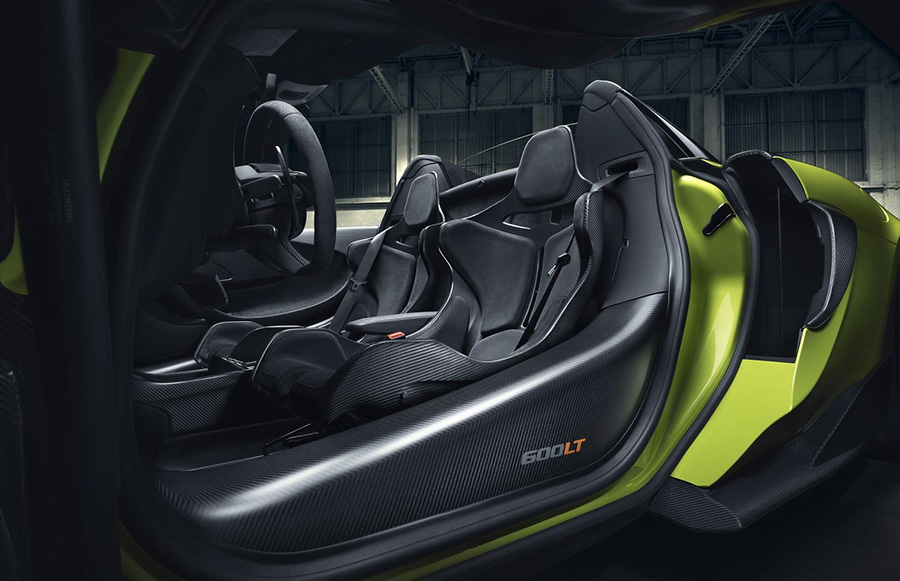 Incorporating technology proven in the 650S, 675LT and 570S Spiders, the hardtop roof is more secure and wear-resistant than a fabric alternative would be, as well as offering Coupé-like cabin refinement when in the raised position. Equally importantly, it allowed McLaren’s design team to maintain the focused design language and silhouette of the 600LT Coupé. When lowered, the roof stows elegantly with the assistance of soft-close technology beneath a tonneau cover located behind the seats; with the roof raised, this tonneau storage area provides an additional 1.8 cubic feet of luggage space. 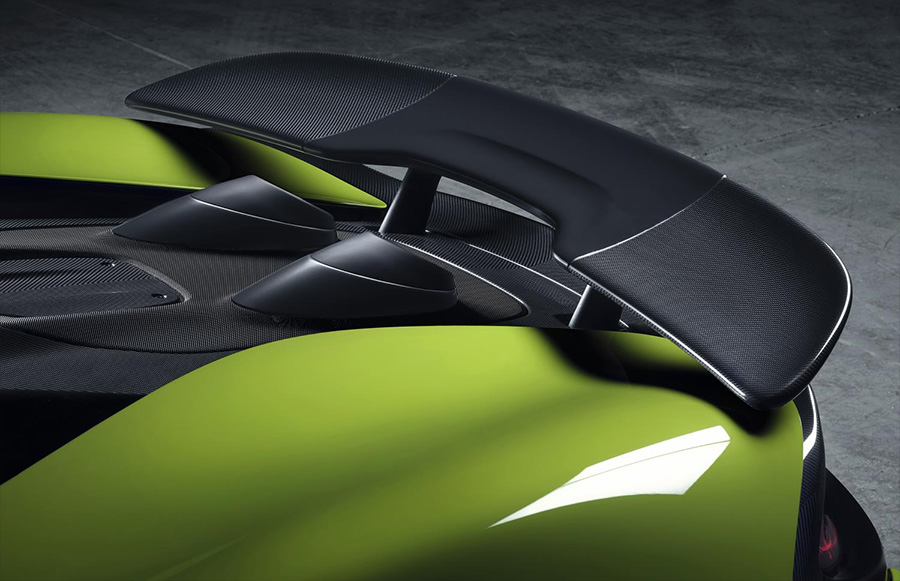 The 600LT Spider benefits from the same portfolio of performance enhancements that has proved irresistible to 600LT Coupé buyers. The electronic control systems of the twin-turbocharged, 3.8-liter V8 engine have been revised, the cooling system uprated and the shorter exhausts tuned to liberate more power. The engine produces the same 592bhp and 457lb ft of torque in the Spider as it does in the Coupé. 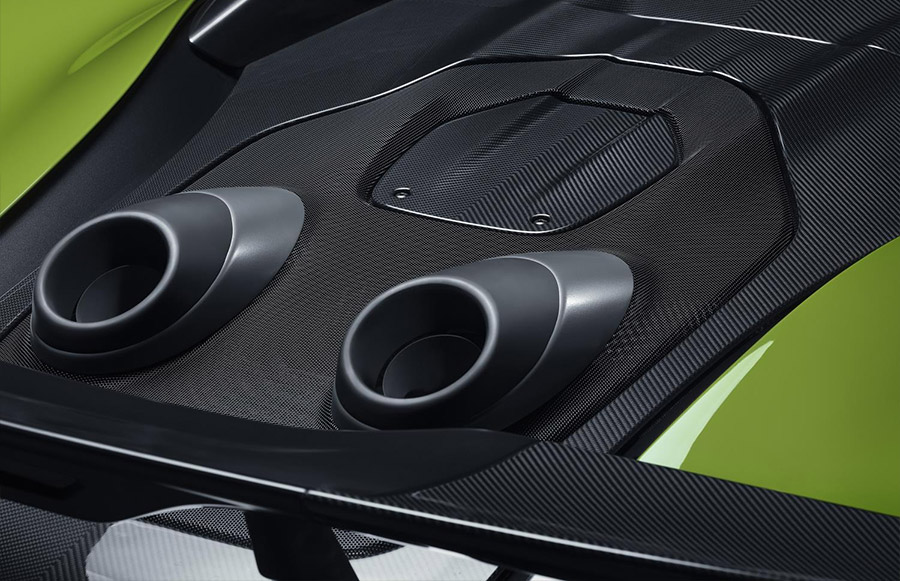 The uprated powertrain enables the driver to exploit the 600LT Spider’s carbon fibre monocoque chassis to the full, aided by a dual-clutch, Seamless Shift seven-speed Gearbox (SSG) that features Ignition Cut in Sport mode to facilitate faster changes whilst delivering a dramatic aural crack from the top-exit exhausts, plus Inertia Push in Track mode to optimize acceleration. The 600LT Spider will reach 60mph from a standstill in 2.8 seconds, with 124mph achieved in just 8.4 seconds – a near-indistinguishable 0.2 seconds slower than the Coupé. The maximum speed is 201mph with the roof raised, or 196mph with it lowered. 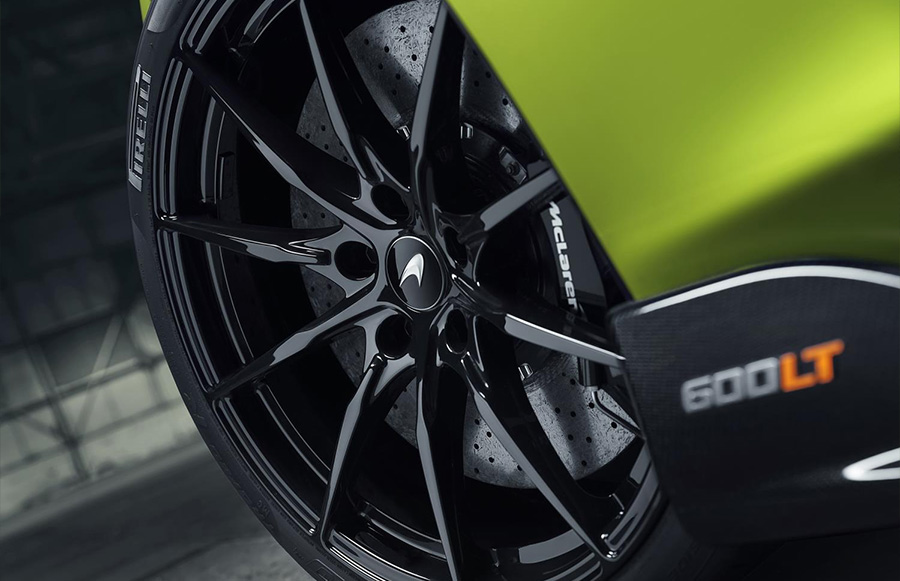 Performance is further enhanced by the lightweight carbon fibre bodywork that creates the Longtail silhouette and the same design of fixed rear wing as the Coupé which – despite the aerodynamic challenges posed by a convertible body – generates the same 220.5lbs of downforce at 155mph.  Ultra-precise, track-focused handling is supported by a forged aluminum double-wishbone suspension system with recalibrated dampers, firmer engine mounts and a lightweight braking system. The 600LT Spider is fitted with bespoke, track-focused Pirelli P- Zero™ Trofeo R tires and the driving experience is further enhanced with quicker steering and sharpened responses from throttle and brake pedals. 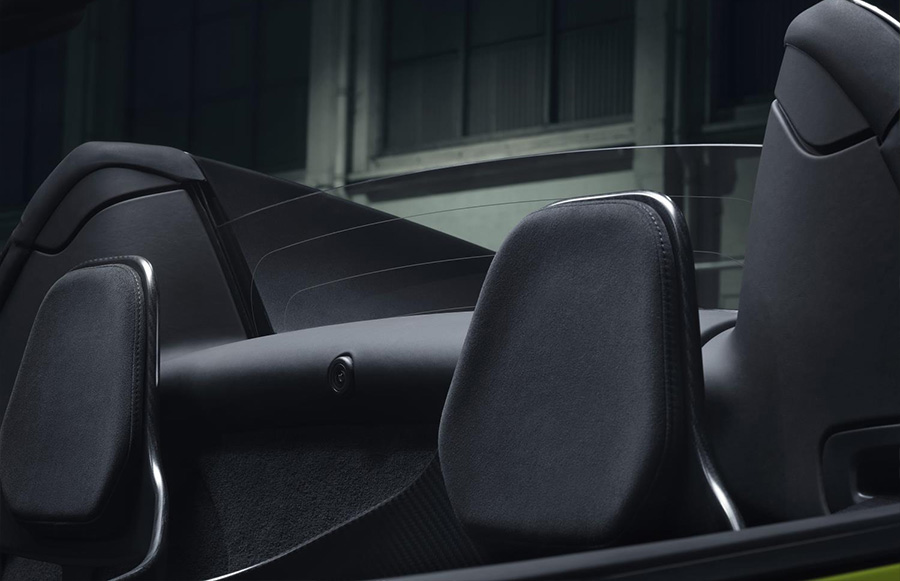 Lowering the roof of the 600LT Spider showcases the performance-orientated interior, which features lightweight Alcantara® trim and Carbon Fibre Racing Seats from the McLaren P1™ as standard. The Super-Lightweight Carbon Fibre Racing Seats designed for the McLaren Senna are available as an option, either on their own or within the MSO Clubsport Pack. Further weight-saving options and measures – including deletion of the audio and climate control systems – are available to buyers determined to shave off every kilogram possible. 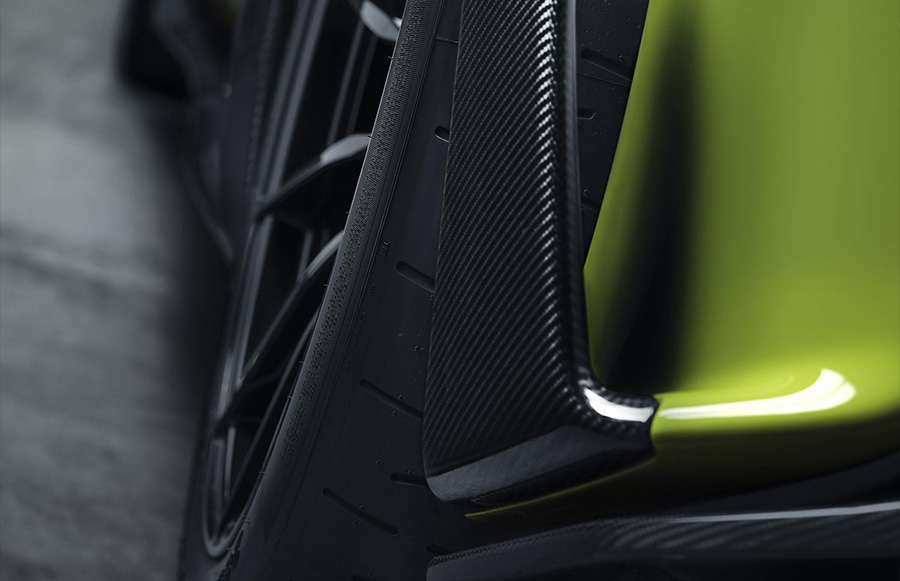 The new 600LT Spider is the fifth model to carry the coveted LT badge, joining the illustrious bloodline that began in 1997 with the McLaren F1 GTR ‘Longtail’, of which only a development prototype and nine examples were built. Victorious in five of the 11 rounds of the 1997 FIA GT Championship, the original Longtail also finished first and second in the GT1 class at Le Mans, almost 30 laps ahead of the opposition. McLaren Automotive revived the legendary Longtail name at the 2015 Geneva International Motor Show, with the launch of the 675LT Coupé, a limited-volume model that rapidly sold out. In response to customer demand, a 675LT Spider followed, all 500 examples of which were sold within two weeks. The fourth model to bear the Longtail name, the 600LT Coupé, was revealed in July 2018 at the Goodwood Festival of Speed and has since been hailed by critics as one of the finest cars in its class – an accolade that will now be challenged by its new Spider sibling.

Like the Coupé, availability of the 600LT Spider will be limited, with build slots scheduled around other Sports and Super Series models.  Available to order now from McLaren retailers, each car will be hand-assembled at the McLaren Production Centre in Woking, Surrey, England.

We will not share your email address.
Automotive News

Next Chapter in McLaren Longtail story Begins With Unveiling of 765LT

McLaren Verdant Theme GT by MSO: Satin Tri-Tone Paint and Use of Cashmere

The FIRST DRIVE in My McLaren Senna After 6 MONTHS!