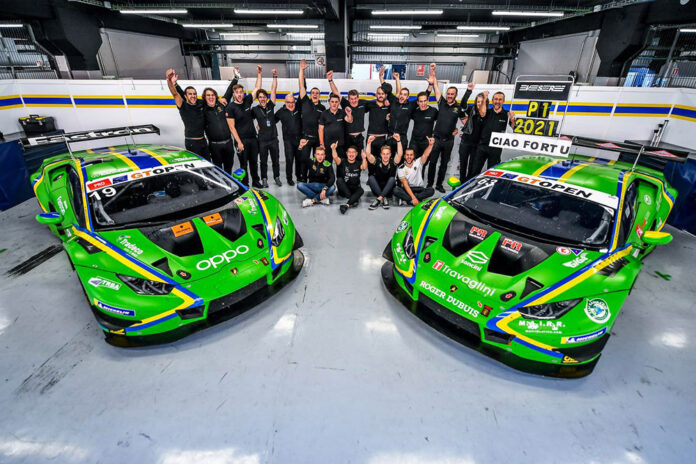 Lamborghini has ended the motorsport season with seven GT championship titles, reaching 42 since the first generation of the Huracán GT3 made its debut in 2015. In 2021, Lamborghini Squadra Corse won a historic triple (drivers’, teams’, and constructors’ titles) in the GT World Challenge America, dominated both the drivers’ and teams’ standings in the International GT Open, and won both British GT titles for the second year running. 24 victories, 60 podium finishes, 29 pole positions and 35 fastest laps thanks to the commitment of 89 drivers (8 of whom are Lamborghini Factory Drivers), who raced over 120,000 km on some of the most prestigious circuits in the world.

The Lamborghini customer teams compete in 13 different international GT3 championships, a category introduced by the FIA in 2006 and dedicated to supercars derived from road-going models. Some of the most prestigious automotive brands participate in this category. Over 40 Huracán GT3 cars currently take part in championships including the GT World Challenge Europe, whose season highlight is the 24 Hours of Spa; the IMSA SportsCar Championship, an American series comprising the 24 Hours of Daytona and the 12 Hours of Sebring; International GT Open in Europe; and competitive national series such as the Italian GT Championship, the British GT, the ADAC GT Masters, and DTM in Germany.

Furthermore, in 2021, Lamborghini, on the lookout for new challenges, debuted at the GT World Challenge America. The team in the American championship, organized by SRO Motorsports, is K-Pax Racing, an established Californian racing team which took to the track for the first time with the cars from Sant’Agata Bolognese, lining up two Huracán GT3 EVO cars, entrusted to the Lamborghini Factory Drivers Andrea Caldarelli and Giovanni Venturini, partnered with Jordan Pepper and Corey Lewis, respectively. Caldarelli and Pepper dominated the season, winning 9 of the 13 races in the calendar and taking third place at the 8 Hours of Indianapolis; the Huracán crew racked up 270 points in the drivers’ standings, 36 more than their direct rivals, team-mates Venturini and Lewis, who had one win in the season. The results of the two crews enabled the K-Pax Racing team to take the teams’ title with 336 points, giving Lamborghini the constructors’ title, with an advantage of more than 100 points over the second-place team. A triple-win added to the triple crown in the GT World Challenge Europe 2019, won by Orange1 FFF Racing, again with Caldarelli in the team.

Lamborghini also came out on top in the International GT Open Championship. The two GT3 Junior Drivers, Michele Beretta and Frederik Schandorff, won the fourth drivers’ title out of six consecutive editions of the continental championship, becoming champions with the Huracán GT3 EVO no.63 of the Vincenzo Sospiri Racing team, with 146 points won over seven rounds. Lamborghini previously won the drivers’ title in 2016, 2017, and 2019. In 2017 and 2018, Lamborghini also won the teams’ title with Imperiale Racing and two years ago with Emil Frey Racing, a goal achieved once again this year by VSR, which closed the standings with 153 points and a significant lead over their nearest rivals.

There was also a double in the British GT for the second year running with Dennis Lind and Leo Machitski becoming 2021 champions behind the wheel of the Huracán GT3 EVO no. 63 of the Barwell Motorsport team. The win at the Spa-Francorchamps circuit in Belgium and podium finishes at Brands Hatch, Silverstone, Snetterton, and Oulton Park, allowed Lind and Machitski to go into the last race of the championship season at Donington Park as favorites, eventually winning the title with a 9.5-point advantage over their second-place rivals. The Dane and Russian enter the history books as the first non-British team to win the title since 2006, the year in which the GT3 category made its debut. Barwell Motorsport, unmatched in the teams’ standings, ended the season on 314.5 points, a gap of 137 points over their nearest rivals.

Finally, a special mention for the most important wins in the class, with the Emil Frey Racing and Barwell Motorsport teams, which dominated the Silver Cup and the Pro-Am category of the GT World Challenge Europe powered by AWS. The Swiss team dominated the season, winning the drivers’ and teams’ titles with Alex Fontana behind the wheel of the Huracán GT3 EVO no. 14; the British team did the same in the Pro-Am with the crew of the No. 77 car, Miguel Ramos and Henrique Chaves.