Getting ‘Slideways’ in a Powerful Porsche 911 SC Rally car 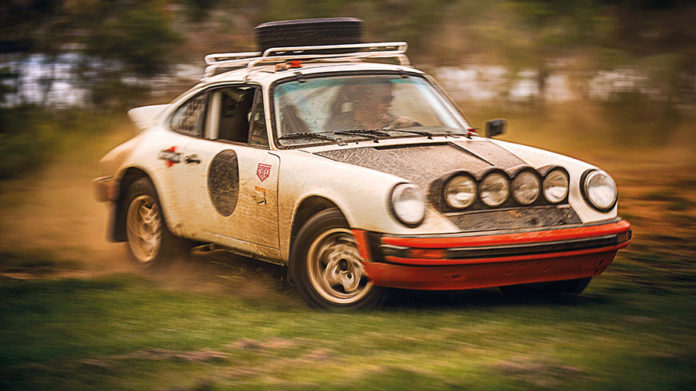 Some people start telling a story, and all of a sudden you’re smack in the middle of it with thunder and lightning and hail all around—even though you might actually be sitting at your desk at home. Jim Goodlett is one of those people. He drives a Safari Rally 911 through clouds of dust near his home in Savannah in the state of Georgia, and we wanted to settle into the bucket seat next to him and feel what it’s like when he heads off-road in the 1978 Porsche 911 SC. The flight was already booked—but then came the coronavirus crisis.

So now it’s plan B, which means a video conference. Great. How are you supposed to experience the depths of passion firsthand while sitting in an office and looking at a screen? That’s easy. Connect with Jim Goodlett. His smile in virtual form is so radiant you almost have to turn down the brightness on your monitor. Then he proudly points his computer’s camera at the treadmill under his desk.

“I log anywhere from thirteen to thirty-two kilometers a day at the office!” he says. He lowers his voice and smiles conspiratorially. “Do you know what I really love about racing? I was born in 1962, and to maintain reflexes and stamina, I also race karts, and do so against people half my age. They’re incredibly fit, so my standing desk treadmill helps me with the needed stamina to handle the forces of late braking into a corner and turning the kart sideways at full speed, just like off-road in my Safari Rally 911 Porsche.” Goodlett calls this mode of driving “slideways.” “It looks like a controlled crash, done so over five hundred times in a ten-hour endurance kart race! Brilliant fun!”

Goodlett is having fun. The stories about his karting days with his friend Ray Shaffer are exquisite. Even as a listener you’re right in the middle of the action. He describes everything with amazing color and detail, gets on a roll, and at some point you’ve forgotten what the original question was. You can hardly wait to hear what this master of narrative authenticity and infectious joie de vivre will tackle next. Suddenly he says, “In short—” and ties up all the loose ends with a final volley of images. Boom.

Sitting in the passenger seat with Jim Goodlett at the wheel of his 911 SC would certainly reveal the same qualities: a staccato drive, vibrant, evocative, and full of unexpected twists and turns. A roaring air-cooled boxer engine with stones and clumps of earth massaging the car’s underbelly. Full speed ahead at the corners of the woods while Jim yells into his headset next to you to ask if you’re OK. “Why do you ask?” you shout back, your question buzzing thinly in the headphones. In response he slams the pedals, turns the 911 crosswise, calibrating the diagonally scraping Porsche with a casual turn of the wheel. The car displays a level of traction that leaves you speechless. It tears forwards so strongly that the clumps can only fly and you’re back out onto the straight stretch. Goodlett grins, and you grin too. Driving slideways. That’s how it’s done. And now would be the perfect time to head for his favorite bar.

Jim Goodlett has clocked thousands of kilometers in his 911 SC this way in the Appalachians. Out into the wild, onto roads that have never seen a lick of asphalt. With a driving style that’s “just this side of dangerous,” as he puts it in the video chat, while he’s already done seven kilometers on the treadmill.

He acquired his fondness for off-road Porsches in exactly the same way that he passes it on—with snapshots that burn into your mind and burst into images full of power. Works of art you might find in an expertly curated gallery.

Image number one: Hot Wheels rally cars invariably driven crosswise by the children’s hands that hold them. Drifting on sofa armrests or among plates and cups is their normal state of being. That was definitely the case for Goodlett. His eyes shine as a procession of 911 model cars rolls across his desk.

Image number two: watching car races with his dad at the age of eleven or twelve. Broadcasts of the International Race of Champions (IROC) show Porsche 911 RSRs careening from the course but then drifting back on after audacious off-road stints to thrash scores of opponents. Jim is exceedingly impressed—to put it mildly—and tells his buddies in Denver about how incredible this is. Porsche, man!

mage number three: photos in a European sports magazine. They show the Racing Porsche 911 SC that caused a sensation at the 1978 East African Safari Rally race. Many years later, Goodlett buys a 1978 911 SC that has suffered a few “disimprovements” but now is finally converted to a Safari Rally racer with a rollover bar, reworked suspension and motor as well as race seats and six-point safety harnesses.

“You have to experience the joy these cars unleash.”Jim Goodlett

Image number four: fresh from college, Goodlett visits a Porsche dealership in Houston. He wants to impress his girlfriend and is even allowed to test-drive a Porsche 930 as part of a generous backstage tour. The dealer must know that the young fellow doesn’t have the means to purchase the super 1980s Porsche but apparently doesn’t care. He ignites a fire that will never die. When Goodlett turns fifty he buys a similar 911 Turbo from 1984 in Slate Blue Metallic. The 930 is his first Porsche.

Twenty-eight days later, a Porsche 911 RSR remake comes to Goodlett’s attention and again he seizes the opportunity. With a tubular frame, a fiberglass body, and weighing around nine hundred kilos, the 911 ambles into his garage as a racehorse. When the 911 SC arrives just about three years later, it embodies all the crazy, magical figures that have long been inhabiting Goodlett’s imagination. “There’s just one thing you can’t imagine,” he says emphatically with his face close to the camera. “You have to experience for yourself the joy these cars unleash. How raw and explosive they are, how well engineered and subtle, how simple yet at the same time how complex they are. A Porsche is a dream—when it becomes reality, all of a sudden everything else looks pale.” The man in Savannah waves at the camera. He nods and laughs. Then the screen turns dark.