One of the most complex and innovative chronographs ever created and is limited to just 57 units. 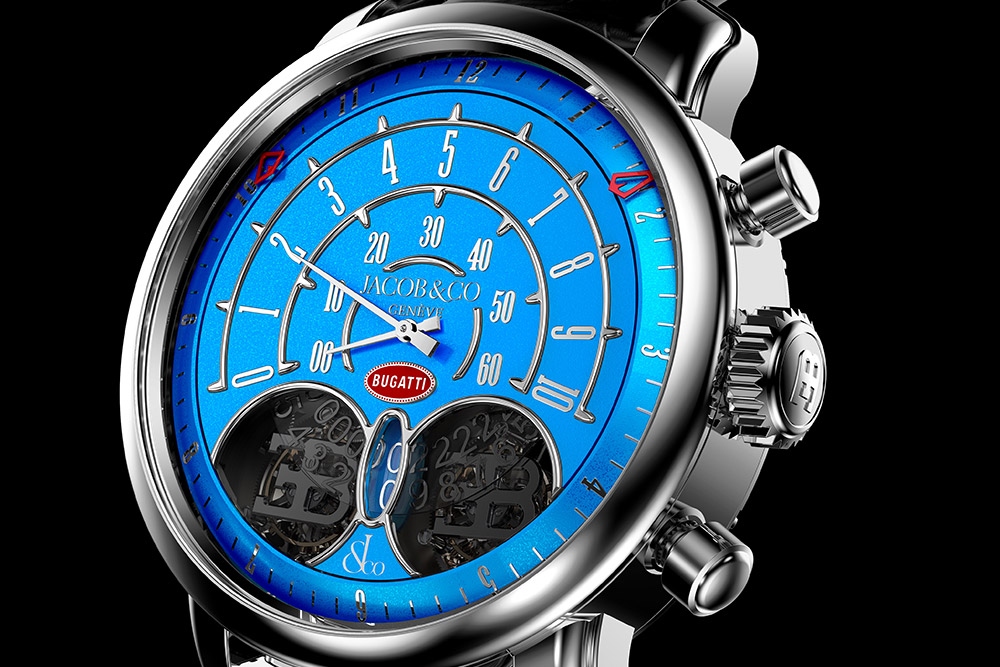 The Jean Bugatti timepiece is perhaps the most demanding watchmaking project ever undertaken by Jacob & Co, named after a visionary pioneer. Jean was the eldest son of company founder Ettore Bugatti, born in 1909 – the same year Ettore set up his new company in Molsheim, Alsace. As a child, Jean loved to watch Bugatti’s craftsmen passionately designing and building cars – every single component a work of art. Later, Jean would visit his grandfather, Carlo, in Paris, as often as he could, where he was inspired by his furniture creations that mixed styles, cultures and materials. Jean would one day lead Bugatti, designing such masterpieces as the duotone Type 50 series, the Type 41 Royale with the longest wheelbase ever created, and the Type 57SC Atlantic. Its signature design feature was its raised seam running vertically from the hinge in the split bonnet to the tail – proportions unknown in the automotive world at the time.

Limited to just 57 units, the Jean Bugatti timepiece is a tribute to this extraordinary innovator, representing his avant-garde and artistic automotive interpretations. Just as Jean Bugatti’s automotive designs defied established trends, so does this eponymous timepiece. It is one of the most sophisticated timepieces to be released in recent years and enters a territory that Jacob & Co. has never explored. The Jean Bugatti may just be Jacob & Co.’s most demanding watchmaking project ever.

The development and manufacturing of the Jean Bugatti presented a series of intense challenges. Made of a total of 470 components, the delicate, wafer-thin design of many parts is extraordinary, considering the immense pressures and forces they are subjected to. The management of forces and energy within the movement is highly complex, and immediately apparent when the caseback is revealed. The movement’s architecture is three-dimensional and a sight to behold in and of itself.

It has a round case, a round bezel, short and elaborate lugs, mushroom pushers, a full-polished rose gold, or white gold case. With its elegant cursive numerals, blued hands, blue or cream-white dial, the 46-mm Jean Bugatti would almost look tame if it weren’t for its unique layout.

The two openings on the dial harbor a pair of one-minute flying tourbillons. Their cage design is topped by the iconic Bugatti ‘EB’ logo, manufactured in polished steel. The Jean Bugatti tells the hours and minutes thanks to a pair of red, inward-pointing hands located on the dial’s rim. The pair of short, blued hands anchored in the middle of the dial are the chronograph hands. The first, longer one stands for the chronograph’s seconds units. The shorter denotes the chronograph’s tens of seconds. When each one of those reaches the end of its course, it jumps backward, thus defining a double retrograde chronograph. The chronograph is powered and regulated autonomously with a separate barrel and a high-frequency regulating organ.

Wiebke Ståhl, Managing Director of Bugatti International, commented: “Capturing Jean Bugatti’s style and creative flair within a single timepiece is a challenging task, yet Jacob & Co. is the perfect brand partner to achieve this. Jean’s spirit remains strong within the walls of Molsheim, as our designers and engineers continue to draw inspiration from his near century-old creations. With this latest timepiece, wearers can enjoy an entirely new standard of sophistication and meticulous attention to detail – the very same step-change Bugatti makes with each of its new hyper sports cars.”

Benjamin Arabov, CEO of Jacob & Co., added: “Designing and developing the Jean Bugatti has been an exciting and rewarding experience. Our partnership with Bugatti is taking on this new shape, and even though it feels comfortably classic, the watch is really something else. This timepiece is a new design direction compared to our existing collections, but it goes to show that great figures make for great inspiration. Applying these historic design elements, coming from Bugatti’s glorious past, is a fascinating supplement to the contemporary hypercar inspiration. And we rose to the challenge with a groundbreaking movement that redefines how a chronograph operates. This is the way Jacob & Co. defies and exceeds expectations.”