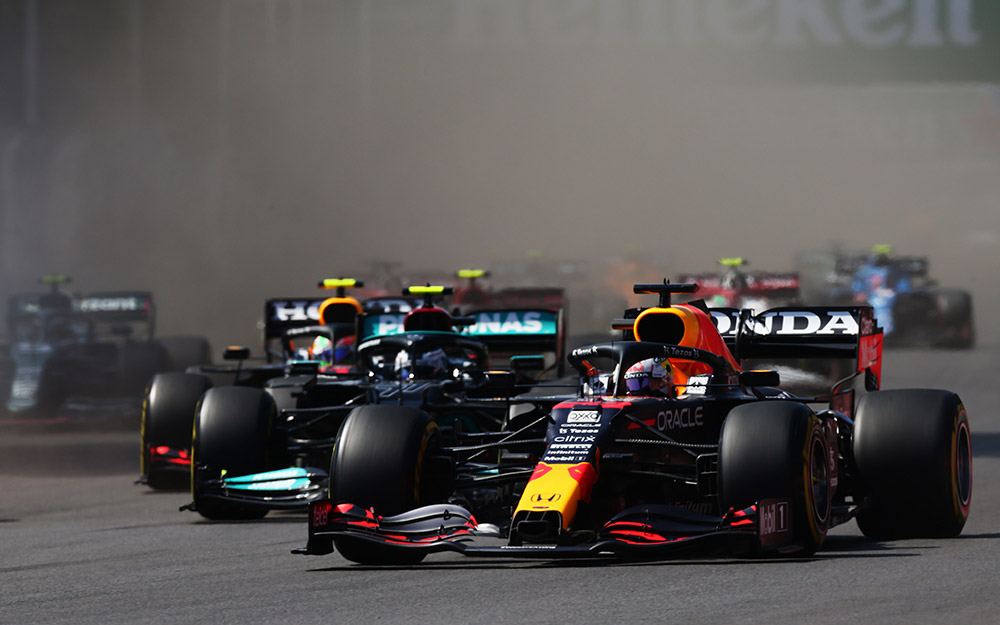 It took less than half a mile for Max Verstappen to take the lead of Sunday’s Mexican Grand Prix and the rest of the field never recovered, as the Red Bull Racing Honda driver led 65 of 71 laps in earning his ninth win of the Formula 1 World Championship campaign. Verstappen’s teammate Sergio Perez led midway through the race and finished a strong third to claim Honda’s third consecutive double-podium finish.

The win paid multiple dividends as Verstappen was able to stretch his championship lead to 19 points over Lewis Hamilton, while the 1-3 finish moved Red Bull to within a single point of Mercedes for the lead in the Constructors Championship chase with four races to run. The Scuderia AlphaTauri Honda of Pierre Gasly had a strong race as well, starting fifth and running up front all day on his way to a fourth-place result.

Verstappen started third as the Mercedes duo of Valtteri Bottas and Hamilton locked out the front row, but the Dutchman used the slipstream of the leaders to gain extra speed and slide around both leaders into Turn One, taking a lead that the Honda drivers would share only between themselves for the rest of the afternoon.

The Dutchman held a nine-second lead when Hamilton pitted out of second place, giving the chance for Verstappen to safely pit three laps later, yielding the lead to Guadalajara-born Perez. The Mexican driver would lead the next six trips around the Autodromo Hermanos Rodriguez, becoming the first home-country driver to lead a lap in a Mexican GP.

Verstappen resumed the lead when Perez pitted for service, stretching his advantage to 16 seconds over Hamilton in the waning laps. Running third, Perez whittled a nine-second deficit to less than one behind Hamilton, but could not find a way around the defending World Champion and settled for third. The double podium gave Honda its 19th and 20th podium results of 2021 and its 45th since returning to F1 competition in 2015.

Yuki Tsunoda advanced into the final qualifying round for the third weekend in a row but started 17th after an equipment change. The drop doomed the rookie to a short afternoon as he was eliminated on the first lap after contact with Esteban Ocon.

The weekend kicked off a stretch of three races in as many weeks as the series heads to Sao Paolo for Sunday’s Brazilian Grand Prix.

Toyoharu Tanabe
Technical Director, Honda F1
The Mexican GP result was excellent for us with three Honda-powered cars in the top four, and for Red Bull Racing Honda it was also a third consecutive double-podium finish. A brilliant start saw Max go from the second row on the grid to lead into the first corner and after that, he never lost the lead all the way to the checkered flag. Checo moved up to third after the chaos of the opening lap and for a few laps towards the end it looked as though he might be able to catch Lewis for second place, unfortunately, in the end it just wasn’t possible. But for him to finish on the podium in his home Grand Prix was a fantastic achievement. Pierre had another strong weekend and did not make any mistakes on his way to a very good fourth place, which means Scuderia AlphaTauri Honda is now equal on points in fifth place in the championship. Yuki also showed great pace all weekend, but he was out after just a few hundred meters in an accident that was not his fault. I must congratulate the engineers both in Sakura and Milton Keynes for the work they did in terms of simulation, which contributed a great deal to today’s result and the teams at the track for a job well done. We are in good shape in the fight for both championships and that is more motivation to try and get another win in Brazil.”

Max Verstappen – Red Bull Racing Honda
Start 3rd, Finish: 1st (9th win of the year)
“It was an incredible day for the Team and also for the fans, to have Checo on the podium here in Mexico at his home Grand Prix was great, so it couldn’t have been better. I knew the start was very important today, we were three wide at one point and I was on the more ideal race line so I could brake later and get into the lead. After that I could do my own thing, the pace was very good today so I could just keep building and creating a gap, the pit stops were seamless and the car was good throughout the race. Checo, for the last few races has really picked it up, he’s been up there and he was really pressuring Lewis today towards the end. I’m still not thinking about that trophy, we’ll try again in Brazil and just keep pushing.”

Sergio Perez – Red Bull Racing Honda
Start: 4th, Finish: 3rd
This is a great result for my country, I really wanted more but unfortunately we didn’t get that. It was so messy in turn one so to avoid incident there was critical and then I wanted second place, but we didn’t get the chance because it is just so difficult to overtake around here. I was really close to getting Lewis but I didn’t get a opportunity to go for itt. I could feel the fans’ energy when I was going through the stadium sector and I was thinking about how many people were here for me, I could actually hear the crowd when I was driving through Foro Sol. I wanted more but I am just very happy to be on the podium of my home country, the Mexicans were so happy today. We are so competitive as drivers that when we finish third we aren’t happy but today I had to enjoy it, everyone who has been there since the start with me was there at the end of the race and that was an amazing moment for me.”

Pierre Gasly – Scuderia AlphaTauri Honda
Start: 5th, Finish: 4th
“I’m extremely happy, P4 is such a great result and we couldn’t ask for a better weekend. Everything was under control with Charles behind, I was able to pull away nicely and manage the entire race well from fourth position. This weekend the car has really been there and finishing ahead of Ferrari always feels good as well. We’re equal on points with Alpine now, it’s my personal plan to deliver fifth in the Championship to Franz and the whole team – a nice and well deserved Christmas gift – so we’ll keep pushing for that. The way we’re currently working as a team I think we’ll be able to find our chances in the next few races.”

Yuki Tsunoda – Scuderia AlphaTauri Honda
Start: 17th, Finish: DNF
“It’s such a shame, the car has been good here and, even if it wasn’t going to be easy, I think there could still have been an opportunity to score points today. It’s just unfortunate, the car next to me got sandwiched and then I was hit, these things happen in racing though. Overall, this race week has been really good, as the performance of the car has been strong, so it’s so disappointing not to be finishing the race.”