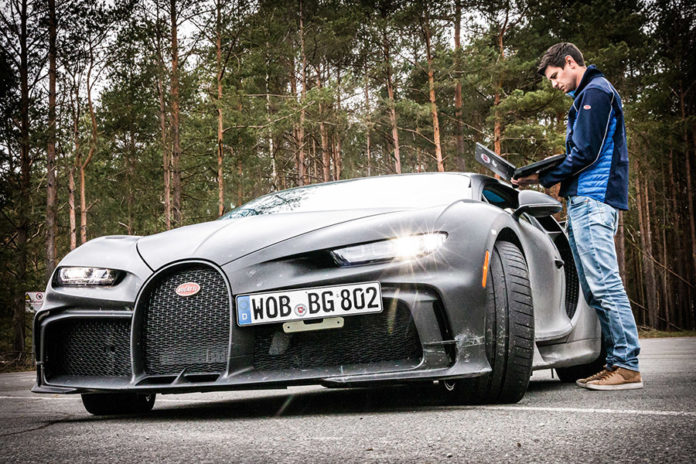 Bugatti has suspended production of its vehicles such as the Chiron and Divo in Molsheim. Nevertheless, many employees are continuing to work from home, taking into account the recommendations of the relevant authorities, international experts and government measures. Lars Fischer, head of chassis testing and application at Bugatti, and Sven Bohnhorst, chassis setup engineer, are continuing to test the extraordinary hyper sports cars from Molsheim.

48-year-old engineer Fischer has been working for Bugatti since 2011 and is responsible for the testing department. “Although we are not working in the office at present, we are constantly developing the vehicles further and driving numerous kilometres at the test sites and on public roads. This means we are still on schedule,” he says. There are nevertheless some differences compared to the usual daily routine. “At the moment, we agree every morning on which applications we want to test over the next two days so that we can react quickly to new situations. Normally we would plan our tasks in advance on a weekly basis,” he says. The engineers work directly with and on Bugatti vehicles such as the Chiron and Divo, so they are dependent on other teams and test sites. “We always have to check how the other employees are working and whether any legal regulations have changed,” explains Fischer. If there is no possibility of test drives and trial runs on roads, the engineers work on their calculation and simulation models at home thanks to modern and highly developed digital work processes. Communicating via Skype is a change, but so far it has worked out well.

“Normally, we always have two engineers working on test drives in the Chiron or Divo so that the tests can be driven according to a set checklist and the data can be saved to a computer in real time,” explains Sven Bohnhorst. The 31-year-old has specialised in steering and damper calibration since 2014 at Bugatti and has helped to develop cars such as the record-breaking Bugatti Chiron Super Sport 300+. “Since we always maintain the recommended safe distance from our colleagues and this is not possible in a car, we are currently driving solo,” he says. For example, he now has to stop to use the computer so that he can change certain test parameters. This means that calibration takes more time – up to 30 percent longer – as some test facilities have only a few stopping points. “But the data obtained is as accurate as ever,” he says. The engineers are currently working in shifts, alternating between three vehicles, sitting in the car for up to seven hours so as to additionally comply with the currently applicable occupational safety regulations. But even though the tasks require concentration, they are still enjoyable. “Working with a hyper sports car like the Chiron with 1,500 PS is a great job that I enjoy doing every single day and one that fills me with pride,” says Bohnhorst.

However, he misses the personal and direct communication with other experts. “We usually discuss the often subjective handling aspects, and seek out better solutions together as a team. At the moment we have to make do with written summaries,” explains Bohnhorst. Lars Fischer also relies on personal and visual contact in his work. “Although many things can be explained in telephone conferences, face-to-face communication directly in the car is easier when dealing with complex topics,” says Fischer. To give him a better understanding of the views of team members, he usually travels as a passenger on the final test drives – but at the moment he is driving solo instead.

Bugatti is still testing its vehicles on the high-speed track at Ehra-Lessien and on public roads. Trips to the Nürburgring or Bilster Berg are also possible as long as they do not take more than a working day, as overnight stays in hotels are not possible at the moment for safety reasons. This also applies to test drives in Southern Italy or France, the home of Bugatti. “However, these tests are still important and we hope that we will be able to drive in Southern Europe again soon when the restrictions have been lifted,” explains Bohnhorst. As he does not have to head out on long business trips at the moment, he now has time to work on his historic Porsche 911 Carrera. “My little workshop is a great retreat where I can recharge my batteries,” explains Bohnhorst. But he is already looking forward to working on the vehicle with the whole team again, sitting in the car together in order to achieve maximum benefit for customers. And so that they can keep in touch, Sven Bohnhorst likes to meet up online in the evenings so that they can enjoy a quick drive together on a racing simulator game. What does he choose to drive? “A Bugatti, of course. What else?”