Bugatti, Louis Chiron, and the Monaco Grand Prix have been intertwined for more than 90 years. 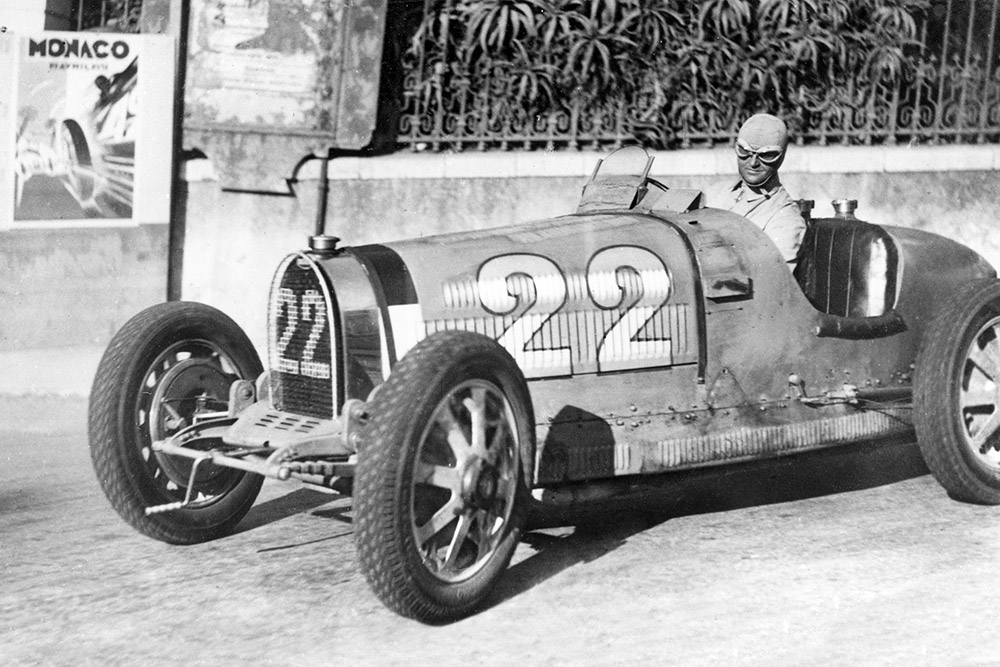 Tight corners, street canyons, and the Mediterranean Sea a hair’s breadth away. No street race is more iconic than the Monaco Grand Prix. Heroes are born here. Racing cars have been speeding down the narrow streets of the 3.3-kilometer circuit since 1929 – all without run-off areas or helpful gravel traps. The circuit demands total concentration, and counts among the most challenging racetracks in the world. Victory in Monaco is considered one of the greatest triumphs in motor racing.

Bugatti has had close ties with the street circuit for more than 90 years. At this year’s 13th Grand Prix de Monaco Historique, starting on May 13, the organizers will be commemorating one of the great events of the motorsport calendar – and therefore also Bugatti.

The idea of hosting a race in the center of Monaco came to Antony Noghès in the mid-1920s when he was General Commissioner of the Automobile Club de Monaco. It took some time for his idea to be realized. In early April 1929, 20 drivers signed up for the event, of which 16 lined up at the starting line on April 14, 1929. Eight of which piloted Bugatti models.

The first race in 1929 was won by the French manufacturer. After nearly four hours, race car driver William Charles Frederick Grover-Williams, otherwise known as W. Williams, was the first to cross the finishing line in a Bugatti Type 35B. This marked the beginning of a new era.

This wasn’t to be Bugatti’s last victory in Monaco. The marque won a total of four times – three of which were consecutive wins. 1929’s success was followed by wins for driver René Dreyfus in 1930, for Louis Chiron in 1931, and for Achille Varzi in 1933.

Louis Alexandre Chiron was born in Monte Carlo on August 3, 1899. He entered his first race in a private Bugatti in 1925 and celebrated his first racing victories in 1927 and 1928. He raised Ettore Bugatti’s attention who offered him, the same year, a cockpit in one of the manufacturer’s race cars. He officially raced for Bugatti until 1932. Chiron became a star behind the wheel of his Bugatti Type 35C and Type 51. Further development of the Type 35B saw a 2.3-liter straight eight-cylinder engine with up to 190 PS and a top speed of almost 230 km/h. Chiron sped from victory to victory with Bugatti and in 1928 won the Rome Grand Prix, the Marne Grand Prix, the San Sebastián Grand Prix, and the Grand Prix d’Europe held in Monza. But he achieved one of his most significant successes in his hometown, Monaco, in 1931, making history in the process. Chiron won the third Monaco Grand Prix in a Bugatti Type 51 to become the first and currently only Monégasque by birth to score a home victory.

Louis Chiron competed in his final Grand Prix in 1955 at the age of almost 56, finishing in sixth place in a Lancia D50 at none other than the Circuit de Monaco. To this day, he is the oldest driver to have ever participated in a Formula 1 Grand Prix.

In tribute, the organizers of the 13th Grand Prix de Monaco Historique have named a starter category after the racing legend: Series A – Louis Chiron, for Grand Prix cars with a front engine built before 1960.

In 2016, Bugatti named its new hyper sports car the Chiron in his honor.