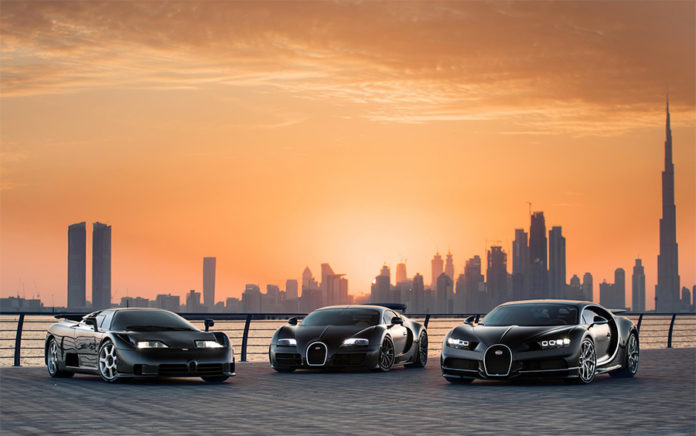 All-wheel drive, four turbochargers and a monocoque made of carbon – Bugatti’s proven and continuously improved ingredients for super sports cars from the last three decades. The Bugatti EB110, Veyron and Chiron are seen as milestones in automotive engineering from the 1990s, 2000s and 2010s.

Bugatti enthusiasts and owners worldwide dream of having all three vehicles complete in their own collection as the “Holy Trinity of modern Bugatti”. They are both coveted collector’s items and an investment. All three models came together for a photo shoot – unique photos of a collection which rarely exists in the world.

At the beginning of the 1990s, Romano Artioli created the first super sports car of modern times with the EB110. EB are the initials of Ettore Bugatti, while 110 stands for his 110th birthday. At the presentation in Paris on 15 September 1991 – on Ettore Bugatti’s 110th birthday – Bugatti revealed a vehicle featuring sensational technology: the lightweight monocoque weighs just 125 kilograms, and is the first series-production car to be made of carbon. Aluminium and carbon, among other things, are used for the body, the wheels are cast from magnesium, and the bolts are made of titanium. The car is powered by a 3.5-litre V12 mid-engine with four turbochargers and a maximum engine speed of 8,250 rpm. Sixty valves ensure fast gas exchange, while the four turbochargers operate with a boost pressure of between 1.05 and 1.2 bar and reduce the turbo lag to a minimum.

The EB110 sprints from 0 to 100 km/h in 3.26 seconds, making it the fastest series-production car of its time. The vehicle has a top speed of 351 km/h. Bugatti set four world records with the EB110, among other things for the fastest acceleration, fastest series-production sports car, fastest natural gas-powered sports car and fastest series-production car on ice. By 1995, Bugatti produced only 96 units of the EB110 GT, as well as fewer than 40 of the lighter and more powerful variant EB110 Super Sport and additionally two official factory race cars with 670 PS. In 1992, the Super Sport cost 550 million lira including maintenance and wear parts for the first three years. The prices have increased since then. Given the small number of vehicles and sales there are few reference values, but last year at an auction held by the auction house Sotheby’s, a bidder paid approximately 2.03 million euros (2.33 million US dollars) for a 1994 EB110 Super Sport.

With the market launch of the Veyron 16.4 in 2005, Bugatti presented a true pioneering achievement and made automotive history. The Veyron ushered in the new century and catapulted itself into a new dimension. Once again, the French manufacturer opted for a carbon monocoque, all-wheel drive and four turbochargers. The first true hyper sports car in the world delivers 1,000 PS and has a top speed of over 400 km/h at 407 km/h. The completely newly developed 8.0-litre W16 engine initially has an output of 1,001 PS and a torque of 1,500 newton metres. This allows the Coupé to accelerate from 0 to 100 km/h in 2.5 seconds; the Veyron reaches a speed of 200 km/h in 7.3 seconds. In 2010, Bugatti brought out an enhanced version of the Veyron with the Super Sport. The powerful drive now produces an astonishing 1,200 PS, and the governed top speed is 415 km/h. In the same year, Veyron 16.4 Super Sport set a new speed record for road vehicles: with a top speed of 431.072 km/h, it becomes the fastest series-production super sports car in the world.

Unusually for such an incomparably fast vehicle, its perfection is reflected in its easy handling and everyday usability alongside its unbelievable power. The Veyron is a work of art on wheels, its materials are of the highest quality and the quality of workmanship is still one of a kind to this day. Only 450 Veyron 16.4. vehicles, including 48 as the Super Sport, were built by hand at the headquarters in Molsheim in the period up to 2015. Today, they are sought-after collector’s items. Since its market launch, the prices for a Veyron have increased by 30-35 percent on average – and continue to rise.

The Chiron superseded the Veyron in 2016. With a maximum power of 1,500 PS, a value never before achieved by a series-production vehicle, tremendous torque of 1,600 newton metres and a host of technical innovations, the Chiron set new standards in automotive engineering in the 2010s. The Chiron sprints from 0 to 100 km/h in 2.4 seconds, to 200 km/h in 6.1 seconds and reaches the 300 km/h mark in 13.1 seconds. The maximum speed of this series-production vehicle for road use is limited at 420 km/h. One of them: the pictured Chiron from 2017 in “Grey Carbon” and “Terre d’or” light-coloured leather in combination with wheels painted in matt grey.

In 2019, Bugatti was the first car manufacturer ever to exceed the 300 miles per hour mark with the Chiron. At the same time, the French luxury manufacturer set a new speed record of 304.773 mph (490.484 km/h). Never before has a vehicle by a series-production manufacturer reached such high speeds.

Of the planned 500 vehicles, over 250 have already been built and delivered – at a unit price of at least 2.65 million euros (before tax).

Is This Bugatti Chiron in Chrome Blue The Best Car and Wrap Combo EVER? –...

Is this Bugatti Chiron wrapped in Chrome Blue, in 26hrs, the greatest car and wrap combination ever?
Read more
Automotive News