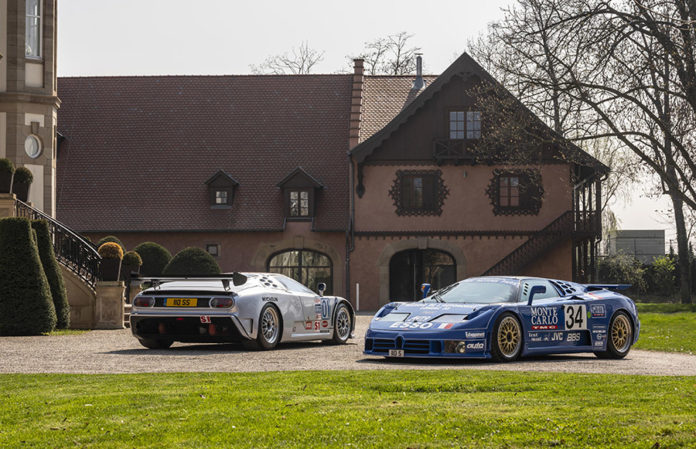 Even the name of the new model EB110 is a curtsey to Bugatti founder Ettore Bugatti. EB stands for Ettore Bugatti, and 110 for his 110th birthday. In the end of the 1980s, it was conceived by an Italian. Romano Artioli had been a great collector of Bugatti vehicles for decades. At the same time he worked as a successful car importer and dealer in northern Italy, specifically for Ferrari and several Japanese brands. It was the mid-1980s, and he was dreaming of the ultimate sports car. Elegant, uncompromising and very fast he wanted it to be. But no existing model met his expectations. So he dreamed of his own sports car; a new Bugatti for the first time since 1956. 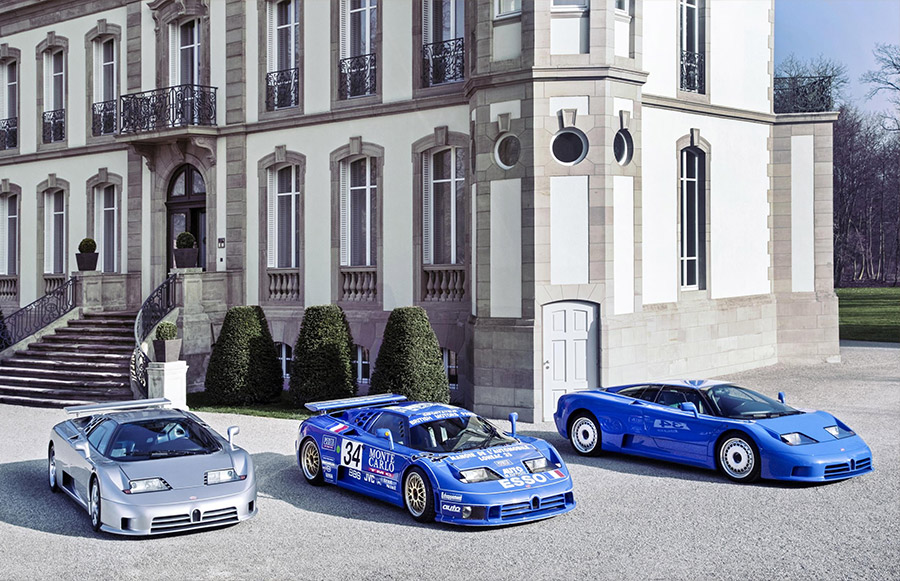 Artioli’s passion for Bugatti was so great that he revived the legendary French automobile brand. In 1987 he bought the trademark rights and became chairman of Bugatti Automobili S.p.A. At the end of the year, he found a suitable production location. Not in France, but in the Emilia Romagna region, near Modena in Campogalliano. The location offered a great advantage: it was located in the catchment area of the major Italian sports car brands such as De Tomaso, Ferrari, Maserati and Lamborghini. This facilitated Artioli in attracting experienced employees. He hired recognised designers, developers and mechanics in the industry. Thus, the first design drafts of the new car came from sketches of the designer of the Lamborghini Miura and Countach. 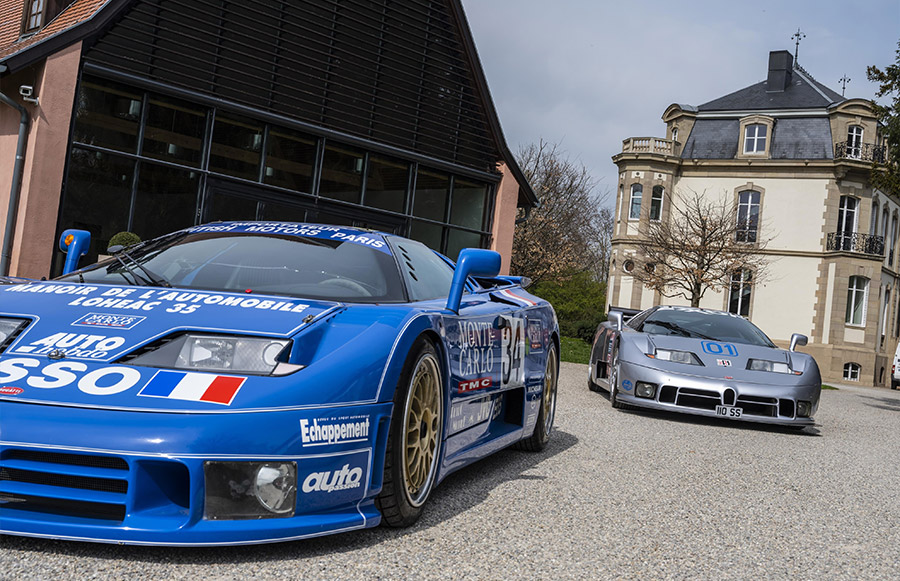 The factory was the most modern of its time, with noteworthy details. As a Bugatti fan through and through, going so far as to hanging the original entrance door from the former Bugatti factory in Molsheim in the cantine entrance. Artioli is no oblivious to the rich Bugatti story: he opened the factory on the 15th of September 1990, Ettore Bugatti’s 109th birthday. For the ceremony there was still no modern supercar present, but 77 selected historical Bugatti models. 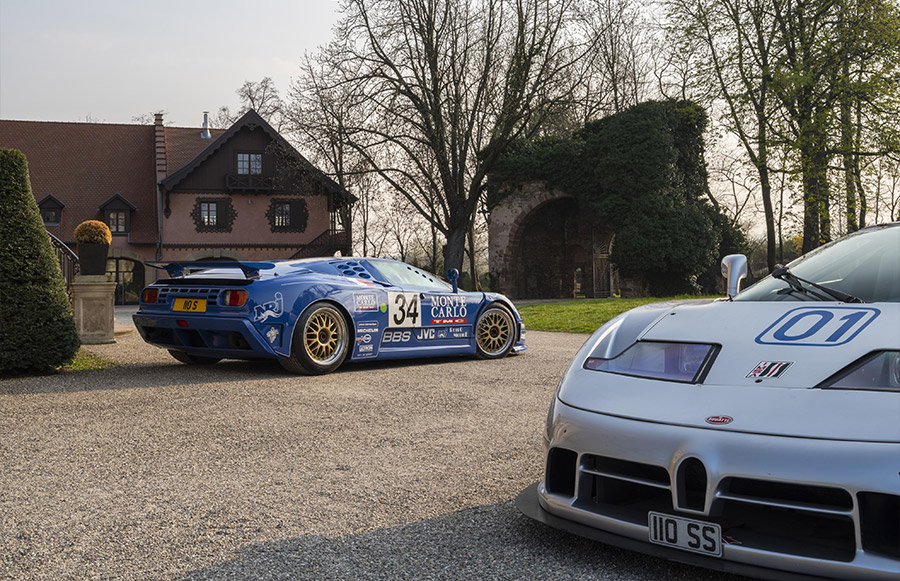 Consistent Lightweight Construction in All Components

He didn’t spare any expense for the new interpretation of a Bugatti super sports car. True to the motto of Ettore Bugatti, he only wanted the best for his vehicle. The lightweight monocoque weighing only 125 kg consisted of carbon, manufactured by the French aerospace company Aerospatiale. Aluminum, carbon and aramid fibre and reinforced plastic were used for the body, the rims were cast of magnesium, each screw and bolt is made of titanium. As the drivetrain for the super sports car Artioli chose a 3.5-liter V12 mid-engine with four turbochargers and a maximum speed of 8,250 rpm. Two camshafts per cylinder bank and five valves per combustion chamber ensured fast gas exchange. The turbos worked with a boost pressure between 1.05 and 1.2 bar, and minimize the otherwise feared turbo lag almost to non-existence. With the throttle valves completely open, the EB110 accelerates at full elasticity. 15 litres of oil in the dry sump lubrication ensured sufficient engine lubrication. 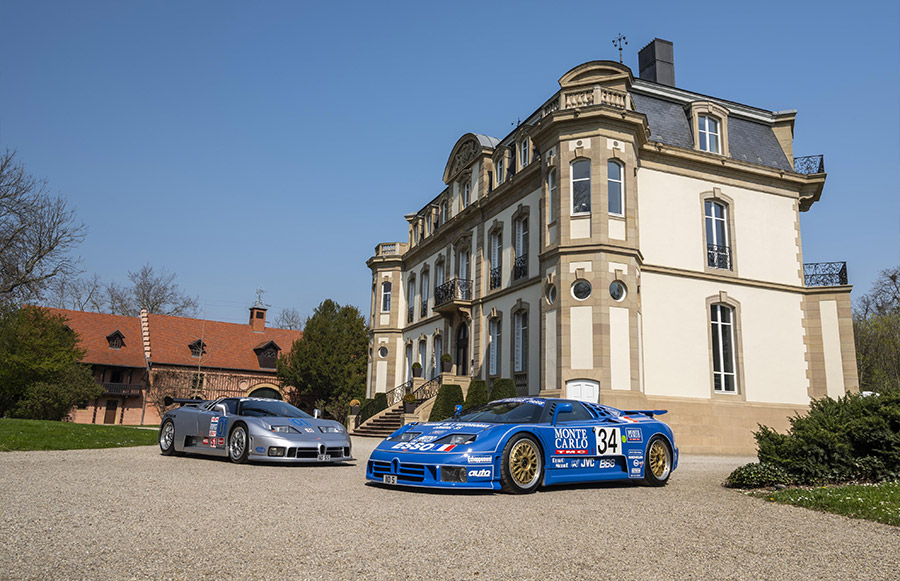 Depending on the model and configuration, the engine provided between 560 and 610 hp, the power is transmitted permanently on all four wheels. This is ensured by a manual six-speed transmission, all-wheel-visco lock, limited slip differential in the rear and a torque distribution of 27:73 percent. On the 18 inch magnesium rims sat the front tires in the 245/40 ZR18 dimensions and the back ones in 325/30 ZR18. 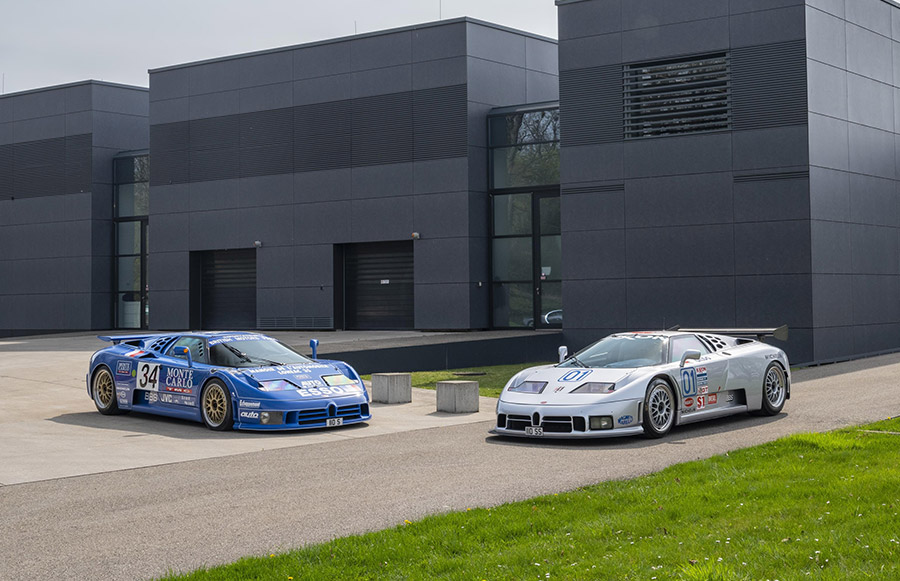 All this was new in the early 1990s and, most definitely, a sensation. A V12 with four turbochargers with intercooler, four-wheel drive and two differentials was unheard of. It was an absolute super sports car. From 0 to 100 km/h the EB110 needed only 3.26 seconds, making it the fastest production car of its time. Its top speed is 351 km/h. World record for a standard sports car. Even 30 years later the EB110 is still among the fastest cars on the planet. And yet, thanks to the all-wheel drive system, the EB110 was a suave drive and, because of the standard ABS, it was considered a safe vehicle as well. Bugatti sprang and placed itself to the top of the automotive industry, making it difficult for any competition. That’s exactly where Artioli had always seen the brand to be. 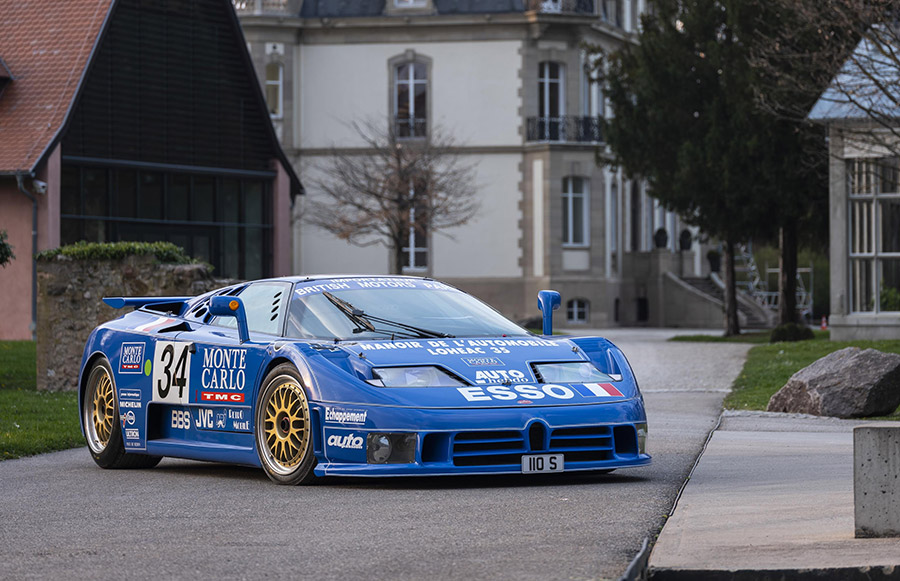 In addition, the EB110 offered extreme comfort: air conditioning, electric seat adjustment, power steering, central locking and a high-quality sound system were among the standard features. The interior features the most magnificent materials in the world, among them leather from the Italian furniture manufactory Poltrona Frau. The doors swung elegantly upwards when opened, and an automatically extendable rear spoiler would increase the contact pressure at higher speeds, while an automatically adaptable c-pillar improved the aerodynamics as well as the engine cooling. 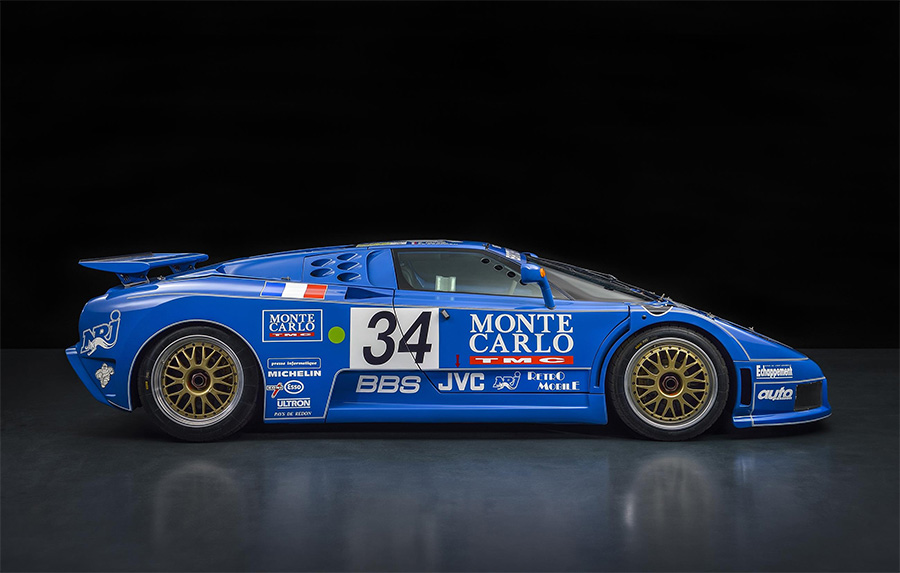 Although the EB110 was made by hand in Campogalliano, Bugatti celebrated its first new vehicle on 15th September 1991 in France – coinciding with Ettore Bugatti’s 110th birthday. Around 2000 invited guests came to the presentation in Paris, and three EB110s crossed the Champs-Élysées. The first orders for the super car were received – it couldn’t look any better. Bugatti offered the EB110 in the model variants EB 110 GT (Gran Turismo) and a little later the lighter and stronger variant EB110 S (Super Sport, later called SS). Bugatti sets four world record with the EB110: for the fastest acceleration, the fastest series production sports car, the fastest sports car running on gas, and the fastest series production car on ice. 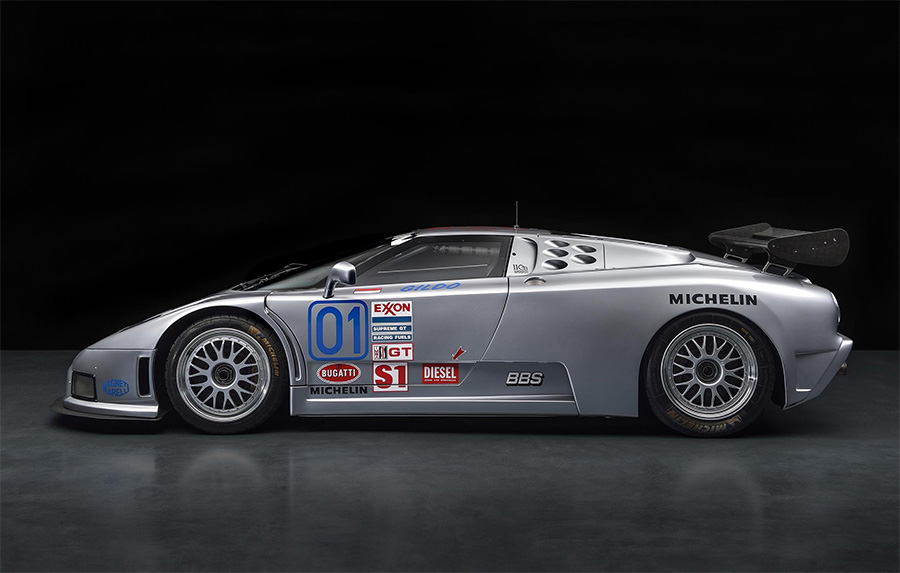 However, at the same time the market for supercars was collapsing dramatically, and demand was falling drastically. In addition, Artioli invested in the car company Lotus and accumulated high liabilities. When he could no longer pay his suppliers, the production facility in Italy was closed down. By 1995, only about 128 vehicles – 96 EB110 GT and 32 EB110 Super Sport – had been made at the factory in Campogalliano, among them two works race cars with 670 hp. They started at the 24 hours of Le Mans, in Suzuka, and in the American IMSA series at the 24 hours of Daytona, among others. They were the last cars to leave the factory.

After around two years, the bankruptcy proceedings ended in September 1997. “The realisation of such a dream seems simple, but as it turns out when put to practice, it’s just madness” Roman Artioli once said. But the legend of Bugatti was not put to sleep for long. 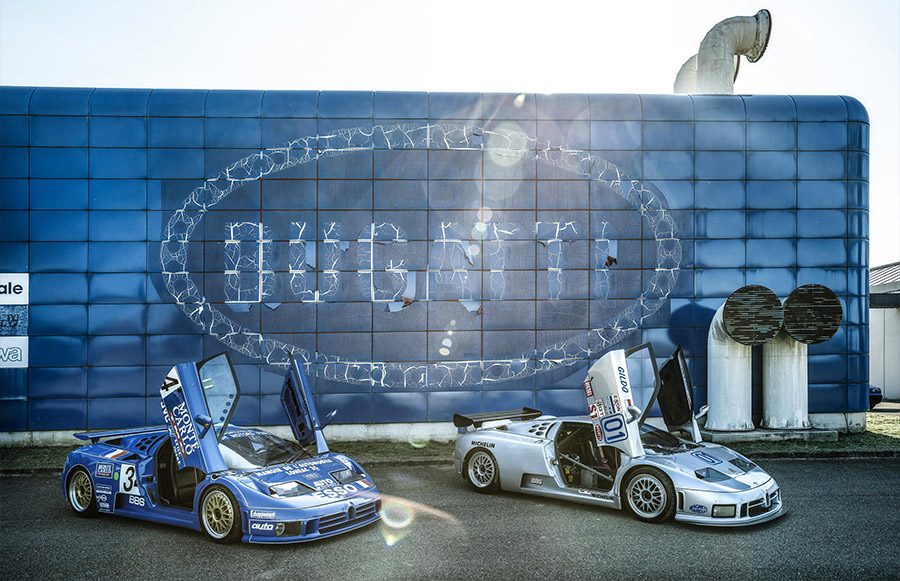 Only a year later, the Volkswagen Group took over the trademark rights and helped the company to reboot in the following years. In 1998, Bugatti returned to Molsheim, France, where Ettore Bugatti had once built his first car under his own name. Since then, the unique hyper sports cars Chiron, Chiron Sport and Divo have been produced in the Alsatian manufactory. “With the EB110 Romano Artioli has succeeded in making a great sports car. Because of his initiative and thanks to his efforts, Bugatti has been revived in the modern age” says Stephan Winkelmann, President of Bugatti. It is important to celebrate this feat. The EB110 may be the only Bugatti that wasn’t built in Molsheim. And still, it is a true Bugatti – 110 percent.

Bugatti Divo Joins THE Greatest Hypercar Drive The UK Has EVER Seen! – Mr ...

From the Bugatti Divo to McLaren Speedtail, this is the greatest hypercar drive the UK has ever seen!
Read more
Automotive News